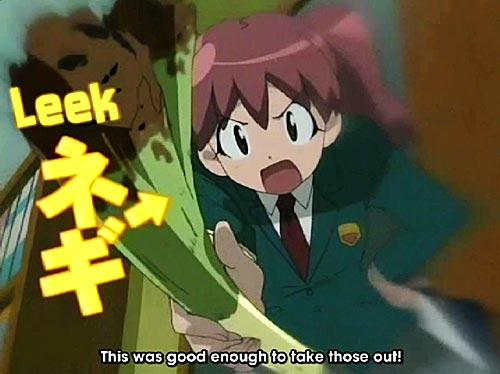 An early appearance of the leek in anime (Keroro Gunsou, episode 4a (2004)). This antedates “leekspin” by two years.

The anime I’m interested in is generally very different from the shows I used to watch on Saturday mornings many years ago. Serial Experiments Lain, for instance, has nothing in common with, say, Yogi Bear beyond being animated. ((Unless you count Lain’s pyjamas.)) Sometimes I’m in the mood for something silly and trivial, though, which brings me to my next list:

All of these consist of short episodes with no long-term narrative once all the main characters have been introduced. (Galaxy Angel makes no pretense of continuity at all.) They’re generally okay for kids. They are best taken in small doses; trying to marathon any of them results in indigestion. None of them approach the level of the best of Chuck Jones or Tex Avery, but they all compare favorably with the typical Hanna-Barbera offering. (The writing in Animal Yokocho approaches Moose and Squirrel level.)

The Melancholy of Haruhi Suzumiya, episode ten (broadcast order) — one of the very few alleged “crowning moments of awesome” that actually is just that.

Denno Coil, episode four — defines “pwned,” except that the term will be obsolete slang in Isako’s day.

Seirei no Moribito, episode three — one of the rare conventional battle scenes that holds my attention …

… because, in general, fight scenes bore me. That’s why this list has only three items. I could add the fifth episode of Crest of the Stars and the last third of Banner to make five, but I think I’ll leave it at three.