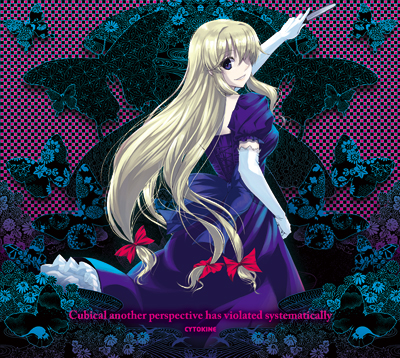 The “Touhou Project” is a family of shooting games. According to what I’ve read, they are mostly the work of one person, “ZUN,” who, as “Team Shanghai Alice,” writes the code, draws the art and composes the music. They are noteworthy for their complex bullet patterns and large casts of pretty girls. ((if you don’t mind cockeyed mouths)) I don’t have any particular interest in playing the games, but I was curious to note that the very active Touhou doujin community includes many musicians who record their own versions of ZUN’s music in various styles. Most I’ve sampled have been okay but nothing more; I forget them as soon as I’ve heard them. One album did catch my ear, though. It has the perfectly comprehensible title “Cubical Another Perspective Has Violated Systematically” and was recorded by something called “Cytokine.” Here’s a sample:

It’s no substitute for ELP, but what we have here is good, old-fashioned prog rock.

No only is Polysics one of the most energetic bands around (they’d be the world’s greatest rock ‘n’ roll band if only Hayashi could carry a tune), but they are also one of the most uncompromisingly intellectual:

Here are the lyrics.