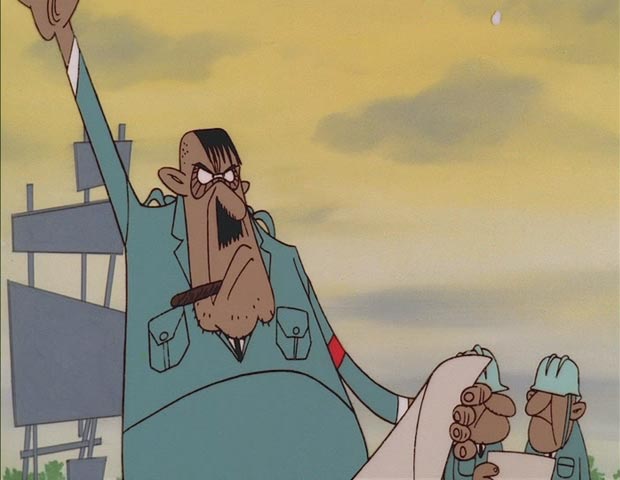 The first half of Osamu Tezuka’s Legend of the Forest is a history of animation. It begins with static sketches of a forest, with squirrels, birds, trees with faces, and a brute with a chainsaw. After a glimpse of a zoetrope, the detailed drawings are succeeded by very primitive animation. Gradually, the art becomes more sophisticated, wth homages to Winsor McCay and Walt Disney. At about the half-way point the film goes from black-and-white to color, and soon thereafter it completes its evolution to Tezuka-style art and animation.

Unfortunately, the man-versus-nature story is not as interesting as the art history. Tezuka has all the subtlety of a sledgehammer. I’m not going to bother summarizing it — you can glean the essentials from the screen captures below. The soundtrack is Tchaikovsky’s fourth symphony. It was not an ideal choice; sometimes it works with the animation, sometimes against it (and I’m not much of a Tchaikovsky fan anyway). Legend of the Forest is from 1987, 25 years after Tales of the Street Corner, but the earlier film was more deft.

Heavy-handed though Legend of the Forest is, it is still worth seeing for the art. However, the pieces on The Astonishing Work of Tezuka Osamu that I am likely to rewatch are the satirical and whimsical cartoons, such as “Memory,” “The Genesis” and “Jumping.” The 6:22 of the last are sufficient reason to recommend the DVD to anyone interested in the history of anime.

END_OF_DOCUMENT_TOKEN_TO_BE_REPLACED

Anime Expo has come and gone. What got licensed?

Uh-uh. There was no mention of anything I’ve been waiting for. The titles that were announced all look like drivel. ((Well, maybe the remainder of Aria isn’t drivel, but I’m one of the few who didn’t find Aria the Animation a life-changing experience.)) Steven has a different list, but he, too, was disappointed.

I’m particularly annoyed that Denno Coil still hasn’t been picked up for region one. Number three of my top five, ((The other four are Haibane Renmei, Serial Experiments Lain, Cardcaptor Sakura and Shingu.)) it is the outstanding first-rate series I’ve seen that remains unlicensed. There are a number of older series on my to-buy list, but there seems to be less and less to look forward to nowadays. Oh, well; I finally got a new pair of glasses and can read all evening long again. Running out of anime won’t be a disaster.

There is a bit of good news regarding licensing: Kino International will release a compilation of Osamu Tezuka’s short films later this month. These date from 1962 to 1988 and are obviously essential for anyone interested in the history of animation. I wrote a little bit about some of them here.