Some years back I posted one of Robert Benchley’s Christmas pieces. Here’s another.

By Robert Benchley
It was the night before Christmas, and Editha was all agog. It was all so exciting, so exciting! From her little bed up in the nursery she could hear Mumsey and Daddy down-stairs putting the things on the tree and jamming her stocking full of broken candy and oranges.

“Hush!” Daddy was speaking. “Eva,” he was saying to Mumsey, “it seems kind of silly to put this ten-dollar gold-piece that Aunt Issac sent to Editha into her stocking. She is too young to know the value of money. It would just be a bauble to her. How about putting it in with the household money for this month? Editha would then get some of the food that was bought with it and we would be ten dollars in.”

Dear old Daddy! Always thinking of someone else! Editha wanted to jump out of bed right then and there and run down and throw her arms about his neck, perhaps shutting off his wind.

“You are right, as usual, Hal,” said Mumsey. “Give me the gold-piece and I will put it in with the house funds.”

“In a pig’s eye I will give you the gold-piece,” replied Daddy. “You would nest it away somewhere until after Christmas and then go out and buy yourself a muff with it. I know you, you old grafter.” And from the sound which followed, Editha knew that Mumsey was kissing Daddy. Did ever a little girl have two such darling parents? And, hugging her Teddy-bear close to her, Editha rolled over and went to sleep.

She awoke suddenly with the feeling that someone was downstairs. It was quite dark and the radiolite traveling-clock which stood by her bedside said eight o’clock, but, as the radiolite traveling-clock hadn’t been running since Easter, she knew that that couldn’t be the right time. She knew that it must be somewhere between three and four in the morning, however, because the blanket had slipped off her bed, and the blanket always slipped off her bed between three and four in the morning.

And now to take up the question of who it was downstairs. At first she thought it might be Daddy. Often Daddy sat up very late working on a case of Scotch and at such times she would hear him downstairs counting to himself. But whoever was there now was being very quiet. It was only when he jammed against the china-cabinet or joggled the dinner-gong that she could tell that anyone was there at all. It was evidently a stranger.

Of course, it might be that the old folks had been right all along and that there really was a Santa Claus after all, but Editha dismissed this supposition at once. The old folks had never been right before and what chance was there of their starting in to be right now, at their age? None at all. It couldn’t be Santa, the jolly old soul!

It must be a burglar then! Why, to be sure! Burglars always come around on Christmas Eve and little yellow-haired girls always get up and go down in their nighties and convert them. Of course! How silly of Editha not to have thought of it before!

With a bound the child was out on the cold floor, and with another bound she was back in bed again. It was too cold to be fooling around without slippers on. Reaching down by the bedside, she pulled in her little fur foot-pieces which Cousin Mabel had left behind by mistake the last time she visited Editha, and drew them on her tiny feet. Then out she got and started on tip-toe for the stairway.

She did hope that he would be a good-looking burglar and easily converted, because it was pretty gosh-darned cold, even with slippers on, and she wished to save time.

As she reached the head of the stairs, she could look down into the living-room where the shadow of the tree stood out black against the gray light outside. In the doorway leading into the dining room stood a man’s figure, silhouetted against the glare of an old-fashioned burglar’s lantern which was on the floor. He was rattling silverware. Very quietly, Editha descended the stairs until she stood quite close to him.

The burglar looked up quickly and reached for his gun.

“Who the hell do you think you are?” he asked.

“I’se Editha,” replied the little girl in the sweetest voice she could summon, which wasn’t particularly sweet at that as Editha hadn’t a very pretty voice.

“You’s Editha, is youse?” replied the burglar. “Well, come on down here. Grandpa wants to speak to you.”

“Youse is not my Drandpa,” said the tot getting her baby and tough talk slightly mixed. “Youse is a dreat, bid burglar.”

“All right, kiddy,” replied the man. “Have it your own way. But come on down. I want ter show yer how yer kin make smoke come outer yer eyes. It’s a Christmas game.”

“This guy is as good as converted already,” thought Editha to herself. “Right away he starts wanting to teach me games. Next he’ll be telling me I remind him of his little girl at home.”

So with a light heart she came the rest of the way downstairs, and stood facing the burly stranger.

“Sit down, Editha,” he said, and gave her a hearty push which sent her down heavily on the floor. “And stay there, or I’ll mash you one on that baby nose of yours.”

This was not in the schedule as Editha had read it in the books, but it doubtless was this particular burglar’s way of having a little fun. He did have nice eyes, too.

“Dat’s naughty to do,” she said, scoldingly.

“Yeah?” said the burglar, and sent her spinning against the wall. “I guess you need attention, kid. You can’t be trusted.” Whereupon he slapped the little girl. Then he took a piece of rope out of his bag and tied her up good and tight, with a nice bright bandana handkerchief around her mouth, and trussed her up on the chandelier.

“Now hang there,” he said, “and make believe you’re a Christmas present, and if you open yer yap, I’ll set fire to yer.”

Then, filling his bag with the silverware and Daddy’s imitation sherry, Editha’s burglar tip-toed out by the door. As he left, he turned and smiled. “A Merry Christmas to all and to all a Good Night,” he whispered, and was gone.

And when Mumsey and Daddy came down in the morning, there was Editha up on the chandelier, sore as a crab. So they took her down and spanked her for getting out of bed without permission. 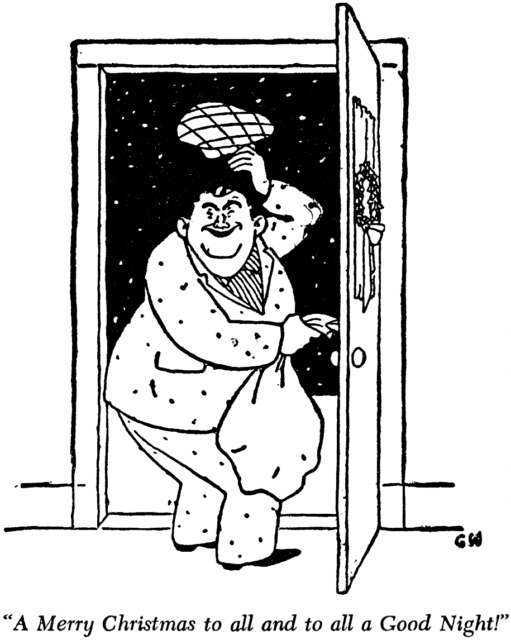