I watched the first episode of Tales of the Abyss to see if there was a good reason for eight different groups to subtitle it.

It starts off with some mythology, introducing a planet made of the seven “fonons.” After the opener, which features a whole bunch of people (you’ll probably need a scorecard to keep them all straight as the series progresses), there’s some more mythology, some history, and prophecies involving a boy with red hair. It’s all very portentous but not particularly memorable.

Then we meet a kid with red hair. He’s a prince named Luke who doesn’t remember anything before he was six. He evidently doesn’t remember much else, either, providing the writers opportunities to dump yet more lumps of exposition into the story in the form of lectures and flashbacks. I suspect that the viewer is supposed to see him as a spirited youth frustrated at not being permitted to leave the palace grounds, but he comes across more as an insensitive lout. He apparently has two belly-buttons.

There are other people, of course: the old gardener he thoughtlessly insults, his servant and keeper, his swordsmanship teacher, his parents, his fiancée — none of whom show much promise of being more than clichés. And then there is Tear, whom I wish would visit me late at night. I am a chronic insomniac, and she can sing people and monsters instantly to sleep. Tear magically arrives at the palace, where she attacks Luke’s teacher. Luke intervenes, and when their blades meet, some kind of supernatural resonance builds up and sends the pair flying out into the hinterlands. It seems that Luke and Tear are both “seventh fons” (is Luke the seventh fon of a seventh fon?). There are monsters out there, which they easily and bloodlessly dispatch, and —

The hell with it. What we have here is another fantasy RPG adaptation of no particular distinction. It’s not terrible, but there’s nothing of interest in it. I can see one or two groups subbing the series for the fans of the game, but eight? It’s squandered effort. 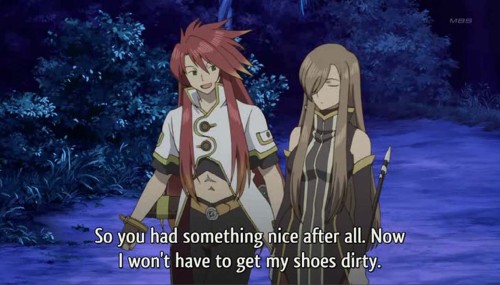 A bit of good news: the second episode of Macademi Wasshoi has finally been translated. It’s as frenetically silly as the first episode, albeit raunchier.

3 thoughts on “A cure for insomnia”