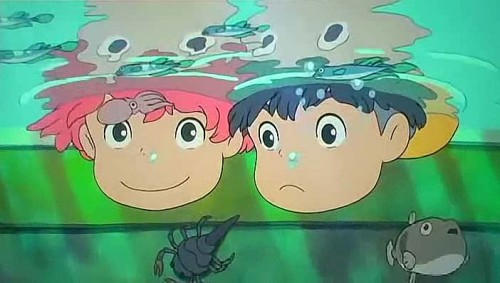 Someone smuggled a video camera into a showing of Ponyo on the Cliff by the Sea, and thus I was able to take a look at it last night. It’s not first-rate Miyazaki, but it is much better than Howl’s Moving Castle. ((The book, Howl’s Moving Castle, by Diana Wynne Jones, is excellent. Give copies to all the youngsters on your Christmas present list, and grab one for yourself. But don’t waste your time on the movie, Miyazaki’s worst.)) It will be worth seeing on the big screen when it’s released in the USA.

The good news: the core story, about the fish who wants to be a human, is something Miyazaki is good at. Ponyo, the magic goldfish, Sosuke, the boy who finds her, and Lisa (or Risa), Sosuke’s mother, are believeable, sympathetic characters. Some of the scenes reminded me of Totoro ((There is a significant parallel to Totoro in that Sosuke’s other parent is absent and, in the latter half of the movie, at risk.)) and Kiki. Ponyo’s first evening as a human in Sosuke’s home is as charming a sequence as Miyazaki’s ever done.

The bad new: the outer story is a mess. It’s a mixture of fairy tale, science fiction, paleontology, celestial mechanics, fantasy and deep ecology that doesn’t immediately add up to anything coherent. (I suppose I should be grateful that there isn’t a war going on.) Perhaps the symbolism will click after several more viewings and all will be clear and logical, but I doubt it.

Ponyo is not prime Miyazaki, but half of it is very good, and all of it is pleasing to the eyes, if not to the mind.

Incidentally, I was surprised by the quality of the video, both image and sound. There were very few clues that this was a surreptitious recording.

Screen captures below the fold.