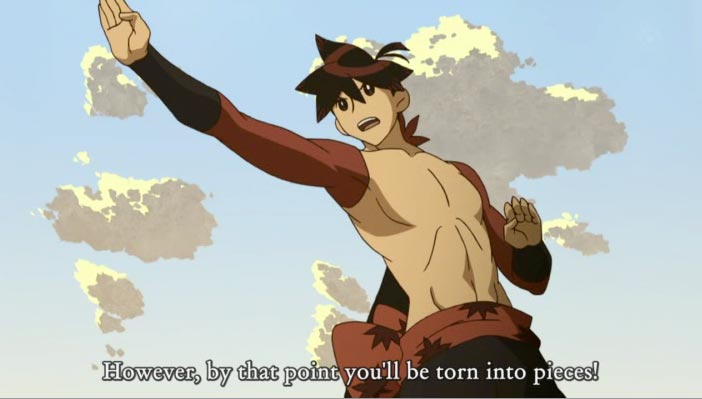 I lasted six minutes and fifty-five seconds the first time I watched Katanagatari. Earlier this month, when I had too many urgent tasks to accomplish and no desire to start any of them, I gave Katanagatari another chance. This time it held my attention, and I watched the rest of the series as quickly as I could download it. I can now state that 2010 has been a good year for anime, with three very different first-rate series (The Tatami Galaxy, Kuragehime and Katanagatari) and a first-rate movie (Summer Wars). 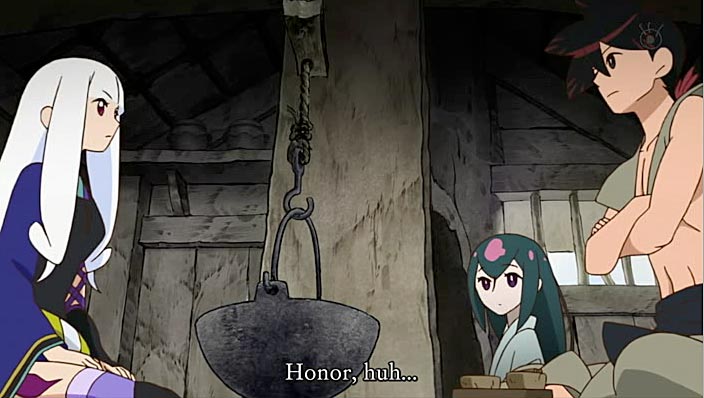 White-haired Togame, who proclaims herself “the army general director in support of critical tasks under direct control of Yanari Shogun of the Owari Shogunate,” searches for twelve “deviant” swords made by a legendary swordsmith. She drafts Shichika, the head and only living member of the school of Kyoutouryuu, the art of swordfighting without a sword, to assist her. Shichika has spent his entire life on an isolated island with only his father and sister for company; he’s nice enough, but naive, unsocialized and a bit strange. He’s one hell of a fighter, even though he wields no weapon. No ordinary swordsman can defeat him. However, none of his opponents are ordinary, and their swords are nearly magical. Some can scarcely be called “swords” at all. 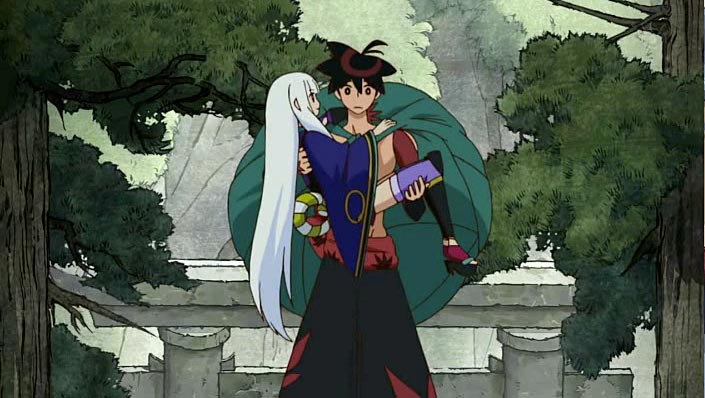 Initially, Katanagatari seems formulaic: find the sword that gives the episode its name; learn the history of the sword’s owner; get the sword. Then comes episode four, in which we get to know Shichika’s frail and terrifying sister Nanami a little better. (Those poor, pathetic, murderous ninjas — they never had a chance.) And that’s as much of the story I’m going to tell you. I’m not going to even mention episode seven.

Although one would expect a lot of fighting in an anime concerned largely with swords, in fact most of each 50-minute episode is devoted to talk. The discussions between the guileless Shichika, the devious Togame and their varied opponents are ususally worth following, but if you’re mainly looking for action, you’ll be bored. When the characters do get around to actually fighting, though, the battles are spectacular. Because of the natures of the “deviant” blades and Shichika’s style, the fights often are more like magical battles than sword fights.

The character designs, apparently based on the illustrations from NisiOisin’s novels, take getting used to. Shichika’s and Nanami’s eyes are drawn without highlights, perhaps to emphasize their alienness. Nevertheless, their eyes are relatively normal compared to those of other characters. If the eyes are off-putting, though, the extravagant hair compensates. More eccentric than the eyes are the costumes worn by the dozen hapless ninja assassins. Most indicate an identification with a particular animal, and some are downright bizarre, e.g., those of the “Insect Squad.” While the character designs are simplified, the backgrounds are highly detailed. I was pleased to recognize Sakurajima in an episode set in Kyushu. ((Given how tectonically active Japan is, it’s surprising how rarely volcanic eruptions and earthquakes occur in anime.))

Katanagatari is sometimes comic, sometimes dramatic. Director Keitaro Motonaga usually handles the shifts in tone well, but he’s not the virtuoso that Akitaro Daichi is. The somber resolution of the story in the third episode is immediately followed by a jarring bit of slapstick, for instance.

The background music by Taku Iwasaki is mostly serviceable, but some pop/rap nonsense is quite annoying. Both openings are okay but not outstanding. Each episodes’s ending features a different song. The only one that isn’t immediately forgettable is that of the sixth episode, by Ali Project.

Katanagatari ends well with the spectacular twelfth episode. If you think there wasn’t enough fighting in the first eleven episodes, you’ll get your fill there. Despite the uncomplicated character designs, the series is probably too intense and thematically complex for children. It’s suitable for those high school age and older. 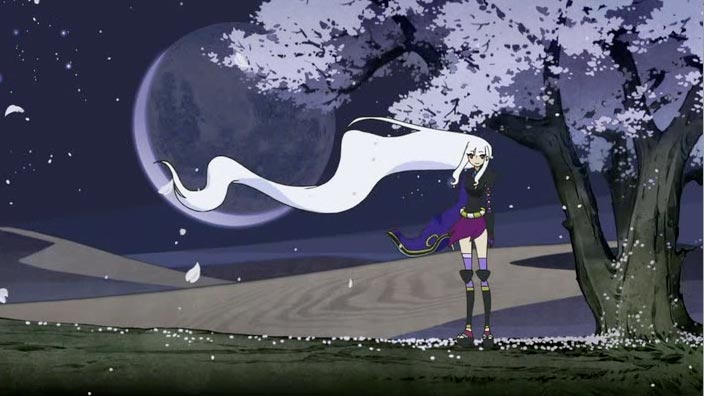 Please don’t mention major plot twists at the beginnings of your blog posts, where those browsing at Anime Nano and Antenna will see them. Also, when you review a completed series, please consider that there might be someone who will read your article who hasn’t seen the show. At the very least, learn how to use spoiler tags. Too many bloggers announced the event at the end of the eleventh episode of Kanatagatari before I had a chance to see it, and I am not the least bit grateful.