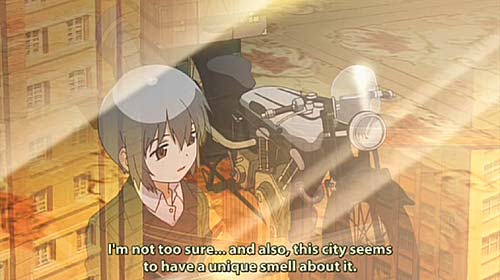 In the recent Kino no Tabi movie, The Land of Sickness — For You, Kino visits a country that seems mostly deserted. The traveler and motoradd eventually find a hermetically sealed city, where they are treated quite well. Kino is invited to tell travel stories to the ailing daughter of a hotelier. There is a disease in the land. The inhabitants desperately search for a cure and hope someday to reclaim the rest of the country outside the city, and they’ve made some progress. However, there’s a dark secret for Kino to discover.

I’m relieved to say that this movie (if you can call a 28-minute show a “movie”) is a vast improvement over the earlier movie, Life Goes On (recommended only for Kino completists). Ryutaro Nakamura is back at the helm and Chiaki J. Konaka wrote the script. It seems like an slightly extended version of a television episode, but that’s not such a bad thing when the show is Kino’s Journey. 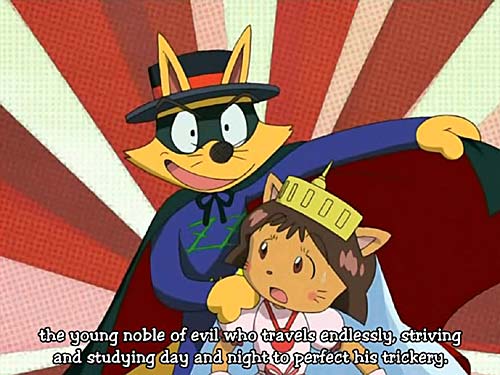 It looks like Kaiketsu Zorori may finally be fansubbed. The series concerns the adventures of the scapegrace fox Zorori, whose ambition is to be the king of mischief. In the first episode he plots to win the hand of a princess using a mechanical dragon, but things don’t go according to plan. If the first episode is representative, this could be a good series for children and tolerable for adults.

I’ve now watched all of Sayonara Zetsubo Sensei, and I dunno. It started off well, but it peaked at the second episode by my reckoning. Once all the girls were introduced, it became hit-or-miss. Sometimes it was pleasantly absurd, but just as often it seemed the creators had only one joke and were mechanically working out every possible permutation to fill the time. It’s probably the year’s best black comedy, but I’m not really looking forward to the second season.

For the heck of it, here’s my top ten for 2007 as it currently stands.

Yes, that’s only six. I haven’t seen everything and I’ve probably missed a few of the best. Perhaps I’ll eventually fit ef and Gurren-Lagann somewhere on the list, but I have to watch them first. Ditto Bokurano and Manabi Straight. Perhaps also Moyashimon. Or perhaps not, if the eighth episode is as horrifying as rumored.

When I was at the hospital last week, I acquired not only a cast but also a virus of some sort. While I’m not quite sick enough to stay home from work (darn), I’m usually dead tired when I get home. Posting will continue to be spasmodic until I feel better.