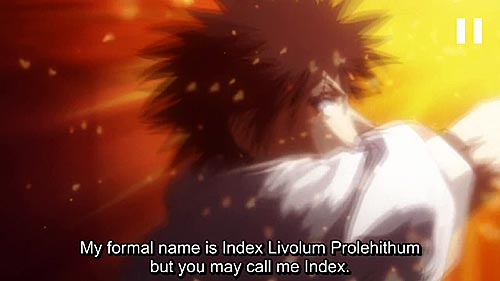 I wish fansubbers would occasionally look things up to make sure thay have them right, e.g., the Index Librorum Prohibitorum.

We have the answer to one of the great puzzles in anime. Marc Hairston talked with Yoshitoshi ABe recently and asked what radio station the shopkeeper was listening to in the second episode of Haibane Renmei.

He said it was local and the antenna was inside the wall. Apparently the wall blocks any radio signals from outside Glie.

There’s also a possibility of the story continuing with an older Rakka, and ABe is working on a novel. 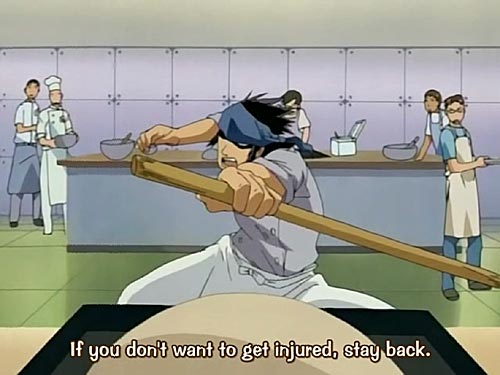 Serious baking is not for the faint-hearted.

Azuma Kazuma, the protagonist of Yakitate!! Japan, is a sixteen-year-old with an immense talent for baking. He’s bumptious, naive and not terribly bright, but he is extremely dedicated to his craft. He has a special gift, “solar hands” that make dough rise unusually fast, and he has a quest, creating the bread that will allow Japan to take its place among the great bread-making countries of the world. The first episode relates Azuma’s introduction to baking; the second concerns his come-from-behind victory in his first competition at the major dojo bakery he hopes to join. 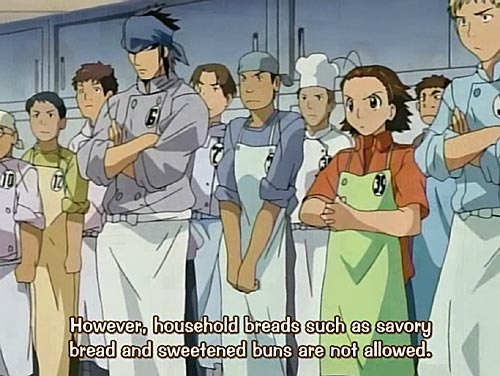 Azuma is the one with the brown shirt. It’s not clearly visible in this screen capture, but he’s wearing a pink hairband. There’s a good reason for it.

The premise sounds ridiculous, but it works. Kazuma is a typical shounen hero, but not to an obnoxious degree, and the other characters introduced so far have possibilties. The show is energetic and done with a light touch. Whether there is 69 episodes’ worth of story there is another matter, though, and I’m not sure that I want to invest that much time in it.

If what I’ve seen is representative, this is a good show for all ages.

When I watch anime, I see meditations on despair and redemption (Haibane Renmei), speculations about information technology and consciousness (Denno Coil, Serial Experiments Lain), case studies in dealing with grief and the importance of music (Sugar, a Tiny Snow Fairy), and illustrations of the importance of families (Jubei-chan: Secret of the Lovely Eyepatch and many, many others). When Brian Alexander, author of America Unzipped: In Search of Sex and Satisfaction, watches anime, he sees sex. ((To be fair, he notes that “Of course, not all anime and manga is overtly sexual — a lot of it is meant for children. Even some adult anime isn’t sexualized any more than, say, Wonder Woman (who was created as a dominatrix bondage fantasy).”)) I guess what you see depends on what wavelengths your eye is sensitive to.

(Via Derailed by Darry.)

Cartoon Brew notes that today is the centenary of Raymond Scott‘s birth, whose music is “genetically encoded in every earthling.” If you spent your childhood Saturday mornings watching Bugs Bunny, you know this tune.

Here’s a radio show about Raymond Scott, featuring Irwin Chusid and a lot of Scott.

1. Azumanga Daioh: There’s Chiyo, Osaka, Sakaki and Yomi — four memorable characters. (Five, according to those who can tolerate Yukari.) There’s one of the finest soundtracks ever recorded. It could have been a classic. Unfortunately, there’s also Mr. Kimura.

2. Divergence Eve and Divergence Eve: Misaki Chronicles: An excellent science-fiction story with interesting, sympathetic characters and a haunting ending that reminds me of Lain. However, it looks like pornography.

3. Kamichu! Hideyuki Kurata is a maddeningly erratic writer. He can be inspired, and he can be dumb. Kamichu! showcases both extremes of his range. The first two episodes are very good indeed and the third is a small classic. The fourth belongs to some other, lesser show, the fifth is dull, and I’m not going to discuss the sixth. The better episodes are good enough to warrant purchasing the boxed set if you can find a good price, but I recommend watching only the first three episodes, the seventh, the ninth and perhaps the twelfth.

4. Bottle Fairy: The first eleven and a half episodes are a great deal of fun for children and their parents as the four tiny fairies try to understand humans and their culture. However, the ending goes off-key and inspires depressing interpretations. By all means, get it for your kids, but stop after the eleventh episode.

5. The World of Narue: A pleasant, lightweight science-fiction story. It would be good fare for junior high students, except that it is rife with pointless panty shots.

Does the background music to this clip from Strike Witches sound familiar? Steven thinks that it’s 19th-century, but I don’t recognize it. My guess is that the tune was composed specifically for the show.

(Yeah, I hadn’t intended to watch any more of Strike Witches, but Steven’s note piqued my curiosity and I had enough left in my BOST account to download one last episode. Unless I hear that there is a quantum leap in quality in the second half of the show, this is as much of Strike Witches as I’m going to waste time on.)

I just watched the first five minutes of Strike Witches #5, and the hell with it. I want to support legal, DRM-free anime downloads, but this is garbage. 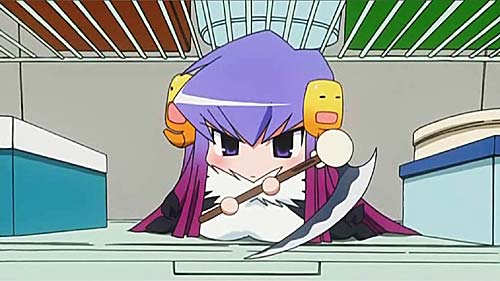 Guchuko easily won the plushie poll with forty-three percent of the votes. President Aria was a distant second with sixteen percent. A random mushi and Potemayo got twelve and eleven percent respectively, and none of the remaining candidates got more than seven percent.

There’s a new poll up now. Which show would you most like to see licensed for your region? I started with Steven’s wish list and added several more.

I spent a large chunk of the day at the Wichita cactus club’s show. I took many pictures, including the Echeveria above. There are more photos here.

… but I prefer young women who play Liszt, such at Ayako Uehara (Via M. Keiser):

Here’s the end. Here’s some Rachmaninoff and Tchaikovsky.

A glimpse of Ponyo:

I’ve been doing my bit to support legal anime downloads by keeping up with Strike Witches at BOST. I’m still not convinced that the series really needed to be made. Conceptually, it’s delicately balanced on the borderline between absurd and dumb, but, as Steven says, you’ve got to embrace the stupid. If you can overlook the manifold impossibilities and a few other problems, it’s fun.

It’s not great art. I don’t have much of an apetite for fan service, and the constant panty shots quickly become annoying. However, I’m more irritated by the protagonist, Miyafuji. In the first episode she’s an idiot pacifist who refuses to fight even the aliens attacking the Earth. In the second episode, she shows her quality by disobeying orders and getting in the way during battle. ((Miyafuji hadn’t enlisted yet, so it’s not actually insubordination, but it was still inexcusable. In a more realistic setting, it could have been disastrous.)) Of course, the battle is won with Miyafuji’s help and Sakamoto tells her that she did well, but it’s hard to enjoy a show when I’m constantly muttering “idiot.” It doesn’t help that the token meganekko is a snotty French twit.

On the other hand, the flying scenes are exhilarating and the battle in the second episode is genuinely exciting. Also, there’s no Rachmaninoff. I still prefer the original OVA, though. (Speaking of the OVA, here’s yet another example of why I don’t take most reviewers seriously.)

I also watched the first episode of Birdy the Mighty: Decode. I don’t think I panned the earlier OVA as severely as Steven remembers. It actually isn’t too bad; the main problem is that it ends just as the story gets interesting, and for that reason I can’t recommend it. Decode is slated to run thirteen episodes. That might be long enough to tell a complete story about the high school boy and the interplantary policewoman sharing the same body.

The new version makes a lot of changes, which are not necessarily improvements. For instance, Birdy’s uniform is now symmetrical: 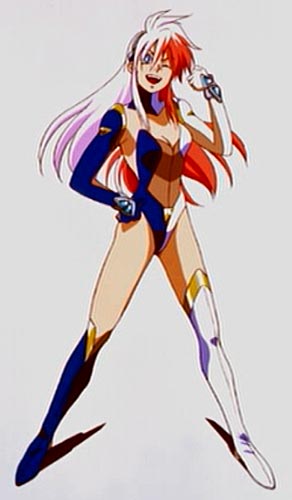 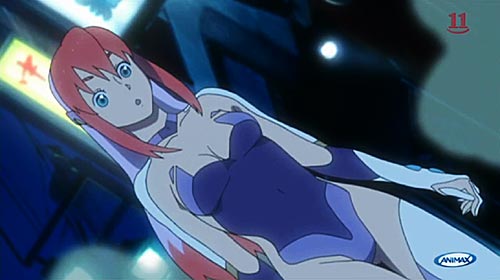 Death the Kid might approve the new design, but I prefer the earlier version.

Birdy maintains a low profile on earth by disguising herself as a model whose image appears in magazines and on billboards. ((It makes as much sense as the Sailor Starlights’ disguises as members of a boy band.)) Tsutomu’s parents leave town for several months in the first episode, and his annoying sister has her own place, leaving Tsutomu alone at home. This is convenient for a young man apt to change into a woman at awkward times, but it sacrifices opportunities for both developing Tsutomu’s character in the context of his family and for embarrassing moments. The new Birdy is played by Saeko Chiba, who tries hard but isn’t Kotono Mitsuishi.

It’s not awful, but it doesn’t look to be an outstanding series. Perhaps I’ll watch more; perhaps not.

Update: Ubu has a fairly positive take on what he’s seen so far of Birdy.

When Geneon abandoned region one, not only did we lose a lot of anime, but we also lost the principal source of anime OSTs. I just scanned through the musical offerings at that other dealer and spotted no new soundtracks, unless you count the Suzumiya Haruhi spinoffs. This is a pity. Often the soundtrack is the best part of the show, e.g., Cowboy Bebop, Azumanga Daioh, Spice and Wolf. The remaining Geneon titles are cheaply priced. If you still don’t have a copy of the Haibane Renmei soundtrack, grab one while you can.

It looks like I need to find some different software for my photo gallery. The package I’m using now, “Gallery,” is insisting that I upgrade, but the upgrade won’t install and I haven’t figured a way around it. In the meantime, here are some photos that I would have uploaded there. These are from the dress rehearsal for Rogers Ballet spring concert last May at Friends University in Wichita.

END_OF_DOCUMENT_TOKEN_TO_BE_REPLACED

I don’t listen to radio at all anymore except during entertaining weather. The last show that I regularly tuned in was Car Talk. I don’t have a car, but that didn’t matter; the real point of the show was the Magliozzis’ quick wit and corny humor. Now Click and Clack have their own animated show. It’s a pity that the video excerpt suggests that it’s going to be politicized garbage.

In other animation news, it looks like I need to see WALL-E.