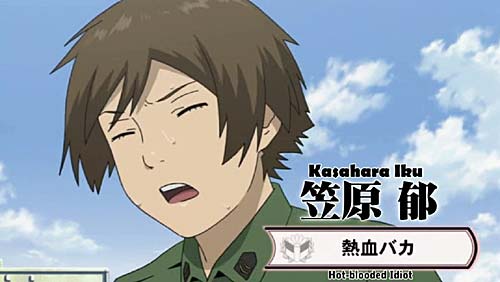 I finally watched the first episode of Toshokan Sensou, a.k.a. Library War. It looks like my spring viewing will be Kaiba, Allison and Lillia, Real Drive and maybe Kurenai, ((I had some problems with the first episode of Kurenai, but so many people have declared it to be one of the best this season that I probably will give it a second chance.)) with Soul Eater and perhaps Wagaya no Oinari-sama for essential fluff.
But not Toshokan Sensou. I could tolerate the absurd premise — the brain police (i.e., “committees of Media Improvement Act”) raid bookstores and confiscate such dangerous literature as books of fairy tales, while a branch of the military defends libraries — if the anime has compensating virtues. And it is a Production I.G. series broadcast in the Noitanima timeslot, so I would expect the show to be better than average. However, the protagonist is a hot-headed fool, too thoughtless to be sympathetic. Toward the end of the episode she rashly attempts to halt a bookstore raid by invoking her authority as a “Private First Class Librarian,” unaware that she needs to be at least a lieutenant to do so. At that point I quit watching. Toshokan Sensou may be intended to be part comedy, but Kasahara is too dumb and annoying to be funny.

3 thoughts on “Revoke that library card”