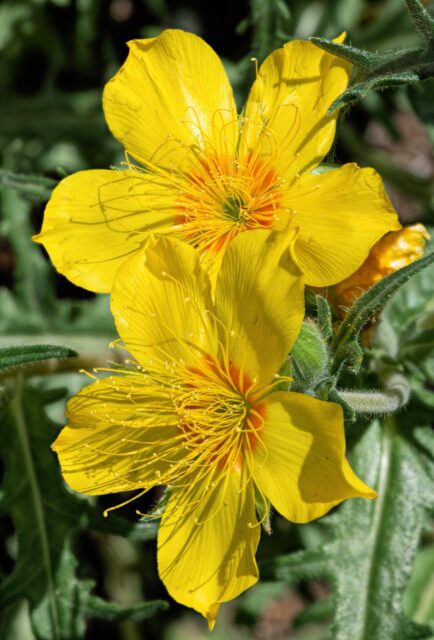 One of this year’s experiments started blooming this week. Mentzelia lindleyi is a hardy annual from California that I seeded outside in early March, along with poppies and Phacelia1. The flowers are about two inches in diameter. They’re supposed to open in the evening and close in the morning, but these have done the opposite — not that I’m complaining. The plants are about a foot tall and probably will grow taller, though I doubt that they’ll reach the three feet that some sources claim. The leaves are long, thin and deeply lobed; they look skeletal, and the plant overall is scrawny. Should you grow it in your garden, I suggest giving it leafier companions.

Mentzelia is a genus of the Loasaceae, a family known for fine flowers and stinging hairs.2 Mentzelias don’t bite, but they do have barbed hairs that can cling to fabric and fur. The stems and leaves feel like sandpaper.

Mentzelia lindleyi is supposed to be heat- and drought-tolerant and bloom for two months3. Summer is nearly here. We’ll see how it does in Kansas.