The Waragecha Five are back, and they have new uniforms: 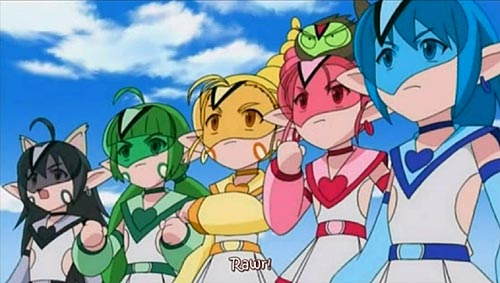 Nice, but I prefer the old style.

A year after their first release, Epic Fansubs have reached episode six of Master of Epic. As a reward for my patience, the Waragecha Five, who were entirely missing from the previous installment, dominate the show this time, with a two-part skit that occupies half the episode. It’s a bit out of character for the show, since it introduces a giant robot into the fantasy universe, but the girls in the sentai team are still very much themselves, even with their science-fiction helmets. The rest of the show is mostly forgettable. 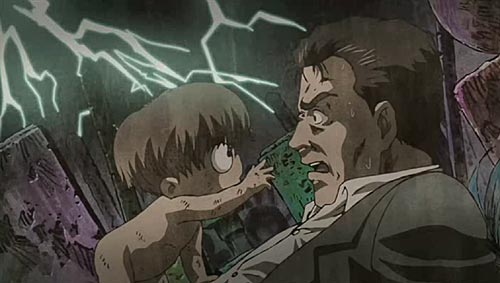 Shigeru Mizuki’s Gegege no Kitaro has been the basis of a major franchise in Japan for fifty years. There have been numerous TV shows and movies based on the manga. I’ve seen the first episodes of both the 1968 and 2007 series (the former in black and white), and was not impressed. Like his ’60’s American counterparts in The Addams Family and The Munsters, Kitaro was fundamentally good-hearted in these versions, and the resulting shows were rather bland, despite the graveyards and the monsters.

Hakaba Kitaro, the most recent adaptation, apparently makes an effort to be true to the source. This Kitaro is genuinely creepy, and humans who meet him don’t necessarily benefit from the encounter. Unlike the Gegege no Kitaros, this is not suitable for kids. Although there is some humor, this is primarily a horror story, occasionally quite grotesque.

Visually, it’s one of the more distinctive shows I’ve seen. It looks more like an artsy graphic novel than a typical anime. I was not surprised to learn that some of the crew responsible for Mononoke worked on the opening, in which the artists recreated Mizuki’s style. It’s worth attention in its own right (you might want to turn the sound down unless you like monotonous dance music).

I’m four episodes into Magic Knight Rayearth. A lot of stuff happens; there sure is plenty of plot. Unfortunately, it comes largely at the expense of character development. None of the characters have much depth yet. After watching a few episodes of Cardcaptor Sakura, I felt like I’d known the characters for years and would recognize them anywhere. The most I can say for the characters in Rayearth is that some are quirky.

This is not to say that Rayearth is a bad series. It isn’t. I probably just came to it with my expectations too high. The story is potentially good, particularly since CLAMP will likely twist the formulae in unpredictable ways. But it does look like it will be one of the lesser CLAMP anime, despite its length.

One thought on “Recently viewed”