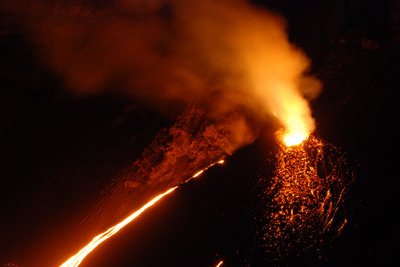 People who are fascinated by volcanoes (Erik?) will be interested to know that the Réunion mountain Piton de la Fournaise has begun its anticipated eruption (Google translation). It’s located on the opposite side of the planet — i.e., it’s night there when it’s day here — but the glow is clearly visible in the webcams. Piton is known for Hawaiian-style eruptions, with lots of nice, photogenic lava (scroll down a bit).

Incidentally, you can keep tabs on Hawaii’s Kilauea here. The best viewing time is just before dawn on the big island (around 11 a.m. here in Kansas). Check Erik Klemetti’s Eruptions weblog for breaking news and much more information about vulcanism around the world.

Update: Grrr. Now that it’s daylight in Réunion, it looks like the cameras are all on the wrong sides of the mountain. There are some photos here and here.
Update II: Here’s a video.