Things are rather dusty in Kagoshima right now. Sakurajima erupted violently this weekend with possibly its largest explosion in almost a century.

You otaku types can have Akihabara. If I ever visit Japan, I’ll spend some serious time in Kyushu, where things like this are everyday occurances:

Suwanose-jima in the Ryukyu islands south of Kyushu is one of the most active volcanoes in the world. There’s a webcam on the island (the last listing in the box to the right), but usually it’s impossible to make out anything beyond a small orange glow just below the center of the image. This morning, however, visibility is was briefly good.

Incidentally, Sakura-jima, jealous of all the attention that Shinmoe-dake/Kirishima has received, has ramped up its activity. There’s a good chance you won’t have to wait long to see a substantial vulcanian eruption on a webcam during daylight hours, and if you’re lucky, you might catch some incandescence at night. ((For a better nightime view, try the fourth listing from the bottom of the right-hand box here.))

Update (2/28/11): After a week of good viewing, the camera image is back to the usual murk. I’d like to send someone there with a bottle of Windex.

Update II: And now the camera is gone. 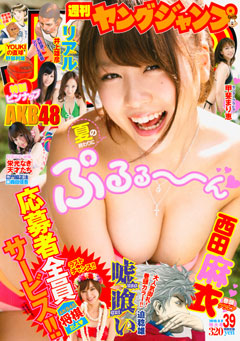 The manga magazine Young Jump has published a history of the Ig Nobel prizes, noted here and here. There’s no translation, but the images speak for themselves. 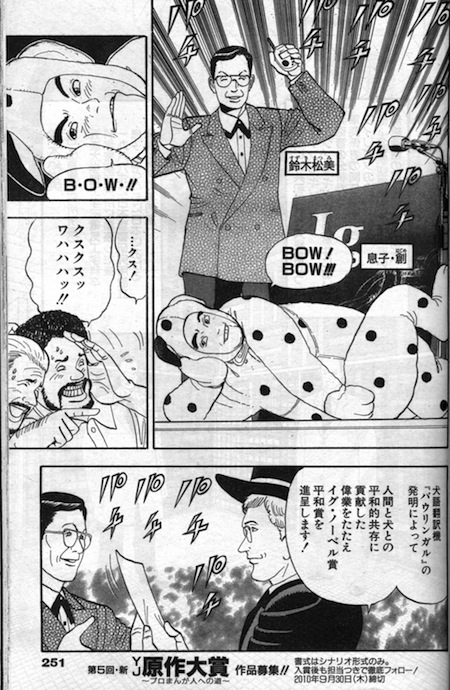 The 2010 Ig Nobel prizes will be awarded September 30. Fans of Moyashimon will be interested to know that the theme of this year’s ceremony is “bacteria.” Scheduled events include:

The Bacterial Opera: World premiere of a mini-opera about the bacteria who live on a woman’s front tooth, and about that woman. Conducted by David Stockton. Starring Maria Ferrante, Ben Sears, Roberta Gilbert and Thomas Michel as bacteria — and Jenny Gutbezahl as The Woman. Pianist Branden Grimmett. Costumes by Jenn Martinez.
Microbial Miniconcert by Evelyn Evelyn (and their friends Amanda Palmer and Jason Webley)
Pre-pre-show Boston Squeezebox Ensemble microbeconcert in lobby (begins at 6:45 pm), led by Dr. Thomas Michel
Pre-show Pathogenic Bacterial Pianoconcerto by Maria Eliseeva

If you get tired of reading manga and watching anime, you can always watch the Japanese Vesuvius. Sakura-jima has been puffing away quite energetically recently, and this webcam has a good view of the active crater. (If you click on the cross-hairs, you can take control of the camera for a while.) It’s best viewed during daylight hours in Japan, though allegedly, if you’re lucky, you can occasionally see some incandescence and lightning at night. (Update: Visibility might be impaired by clouds, particularly when tropical storms are in the region, as is currently the case.)

Nothing worth watching on television? Eyjafjallajökull not doing much these days on the rare occasions when it’s not hidden by clouds? Take a look through the Sakura-jima webcam. When the weather is clear, you probably won’t need to wait long to see a nice column of ash burst out of the crater. Sakura-jima has been almost continuously active since 1955.

A different sort of video: Arthur C. Clarke, Benoit Mandelbrot and the Mandelbrot set, with a soundtrack by David Gilmour. (Via Steven Riddle.)