Here’a a curiosity I came across: a 2002 interview with Hiroyuki Morioka, the author of the Crest/Banner of the Stars novels. One disappointing revelation: in its genesis, the Abh language has more in common with Pig Latin than Quenya:

Question: How was the Abh language developed?

Answer: It’s based on Japanese Actually I just changed the sounds of the words. First write it down using the alphabet, using consonants and sounds. Then mark the same vowels first. The basic idea is to group similar sounding vowels then shorten the syllables. Randomize the consonants. I’m sure no one will understand this explanation.

Question: Could you translate a word into the Abh language?

There was a demonstration next. He started with the Japanese word Takamagahara. He then changed it to TAKMGAHAR by reducing the number of vowels. One feature of Abh language is a consonant before a vowel changes. It finally became LAKMHAKAR. He doesn’t recommend anyone memorizing this.

Nevertheless, this has hasn’t stopped fans from compiling Baronh dictionaries.

I uploaded a couple of contrasting short excepts from Masaaki Yuasa‘s Mind Game to the video weblog to illustrate why I am so impatient to see Kaiba.

Although Yuasa wrote the script for and directed Mind Game, the movie was based on manga by Robin Nishi, which is also the name of the main character. I doubt that the manga is rigorously autobiographical. Nishi’s website is here; it includes a selection of his work and a gallery.

Yuasa’s credits include Cat Soup and Kemonozume, which, like Mind Game, are not for chldren. Despite the simple character designs, I gather that Kaiba isn’t a kid’s show, either.

Quote of the week:

I will personally be nowhere near this. It sounds like my worst nightmare.

Damn ! I so wanted to make this. Oh why oh why did I plan to watch paint dry on the same days !

Fuyumi Ono’s target demographic is youngsters who fantasize that they are adopted. In The Twelve Kingdoms: Sea of Shadow, misfit schoolgirl Youko discovers that she actually comes from Another World, where she has a Great Destiny. In the newly-translated Twelve Kingdoms novel, Sea of Wind, a boy learns that not only does he not belong in the Japanese family where his grandmother makes him and his mother miserable, but that he is not even human.

I don’t have time to write a review — maybe later — but I will note that Sea of Wind is a pretty good story, though less ambitious than the preceeding volume. I don’t know if I ever will watch the anime based on the books. According to what I’ve read, the anime made many changes to the stories, most of which I would probably find objectionable. (I gather that the anime Youko is a much less sympathetic character than the character Ono wrote about.) However, I do plan to read all the books as they become available.

According to Nick, the book Ono wrote that led to the Twelve Kingdoms series may not be released in the USA. Fortunately for me, there is a fan translation available (though I strongly prefer to read fiction as ink on paper rather than as pixels on a monitor). 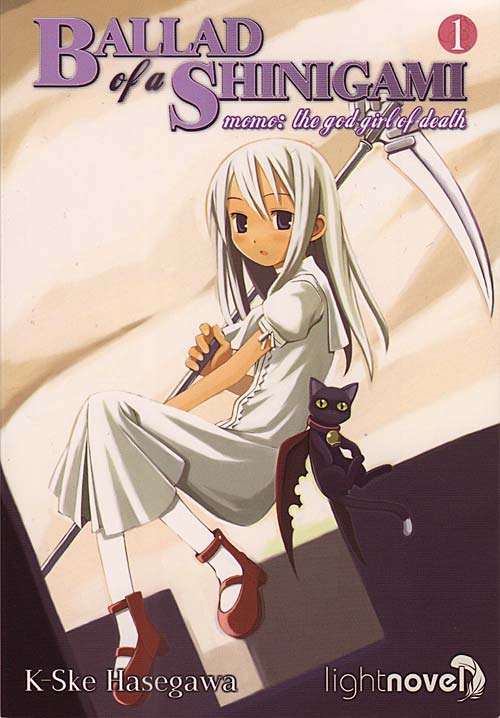 The typical shinigami, according to K-Ske Hasegawa in Ballad of a Shinigami: Momo, the Girl God of Death, Volume 1, atones for the crime of taking his own life by delivering death and collecting souls. He remembers only his suicide and one memory of his past life. His grim nature is reflected in his black color.

Momo, however, remembers nothing at all about her past life. She may carry a scythe, but she wears white, her hair is white and her complexion is like snow. She wears shiny red shoes. Only her eyes are dark. Unlike other shinigami, who conduct their tasks in a business-like manner, Momo takes an interest in the humans whom she encounters. This exasperates her servant demon, the winged cat Daniel.

END_OF_DOCUMENT_TOKEN_TO_BE_REPLACED

What does it mean to be a Lolita? According to Momoko Ryugasaki, it’s not just a matter of frilly clothes:

I have no strength, no stamina. I run really slow, and I can’t even swim. I’m hopeless at sports or anything physical. but I am quite happy with these failings of mine. After all, there’s nothing charming at all about a Lolita who can run a full marathon and clock a pretty good time doing it, is there? If a Lolita is assaulted by a hulking thug and uses judo to throw him over her shoulder, that’s just bad for her image. The weaker a girl is, the better. For a maiden, being frail and high-strung confers status. Once in a while at morning assembly there will be a girl who faints from anemia, and every time I see that I gnash my teeth with envy. Exasperating though it may be for those around her, a girl is decidedly cuter if she cannot do a single thing for herself — if she doesn’t even know how to tie her own shoelaces, I do not want to become the kind of woman who competently balances work and play, and is physically and emotionally robust, and is more suited to protecting than to being protected. I have no wish of becoming a woman of the world who has tasted both the sweet and the bitter things life has to offer. I don’t ever want to eat anything bitter — I plan on living my life by filling myself up with only the sweet. And if that gives me cavities, I’ll cry. If treatment is required, I’ll ask to go under general anesthesia because I hate pain. Call me a sissy and laugh if you will, but this is how a girl ought to be. She should just avert her eyes from the harsh realities and life and, without ever lifting a finger, dreamily devote herself to fantasies that will never come true. If she believes that one day those fantasies will miraculously come to pass, that’s all that matters.

Although Momoko, the narrator of Novala Takemoto‘s novel Kamikaze Girls, ((The Japanese title is Shimotsuma monogatari, or “Shimotsuma Story,” which is more accurate but less intriguing than the English-language one.)) calls herself a “Lolita,” there is no mention of Dolores Haze and Humbert Humbert in the book. Instead, the novel begins with a smart-alecky disquisisiton on the Rococo aesthetic — “… hey, round is cuter than square” — connecting it to punk and anarchism. Eventually Momoko gets around to talking about herself. She’s the high-school-age daughter of a Yakuza reject, whom she uncharitably but accurately calls “the Loser.” She lives out in the boonies near but not convenient to Tokyo, attempting to lead a Rococo life while surrounded by rice paddies in every direction. To raise money for more frills, she places an ad offering the counterfeit Versace clothing her father used to sell. Finally, on page fifty-two, Ichigo Shirayuri arrives on her elaborately tricked-out 50cc scooter to buy a jacket and begin the story:

The person had straight bleached-blonde hair down to her shoulders, wore blue eye shadow and bright red lipstick, and had on a navy-blue school uniform comprised of a short jacket and a very long skirt with a prodigious number of pleats, which dragged on the ground. On her feet were — well, it would sound good to call them “mules,” but actually they were cheap purple slip-on sandals of the type moms wear when going out to the neighborhood supermarket, and their sparkles glinted in the sun. Wow, a sukeban, and a super old-school one … Who knew bad girls wearing outfits like this still existed?

Although they represent mutually alien cultures, frilly-ass Momoko fascinates the hicktown Yanki. Ichigo frequently visits Momoko, and gradually a friendship develops, despite their having virtually nothing in common beyond outsider status. In the course of the novel Ichigo introduces Momoko to pachinko, the two search for a legendary embroiderer, Momoko gets more deeply involved with Lolita fashion, and Ichigo gets involved, too. The story culminates in a girls’ biker gang showdown, in which Momoko, to her credit, fails to live up to her ideal of the useless, helpless Lolita.

Takemoto didn’t worry much about plausibility when he wrote the novel. Although Momoko’s skill at embroidery is believable given her attitudes and history, what happens at her favorite clothing store is pure wish-fulfillment. What happens when she plays pachinko machines is plain fantasy. Ichigo’s unsuspected resource is just a little too convenient, if nicely ironic. And so on.

What salvages the book is Momoko’s voice. Sometimes playful, sometimes sarcastic, usually ironic and detached, the narration undercuts any latent sentimentalism. Momoko tries not to take anything seriously, and it’s not until the final pages that she lets her mask slip.

Kamikaze Girls was made into a movie, and apparently a pretty good one. I might track it down someday, though I expect that I’ll find it as disappointing as any other movie based on a book I like.

I’m sitting on top of the parliament building, resisting tear-gas attacks from air force helicopters that circle above me like flies. I will soon enjoy my very last cigarette, my last show of resistance. My comrade, the painter Kusakabe, fell to his death just moments ago, leaving me alone as the last smoker remaining on earth. At this very moment, images of me — highlighted against the night sky by searchlights down below — are probably being relayed live across the country from TV cameras inside the helicopters.

I’ve got three packs left, and I refuse to die before I’ve finished them. So I’ve been chain-smoking two or three at a time. My head feels numb, my eyes are starting to spin. It’s only a matter of time before I, too, fall lifeless to the ground below.

It was only about fifteen or sixteen years ago that the anti-smoking movement started….

I first became aware of Tsutsui while reading about Satoshi Kon’s Paprika, which is based on one of Tsutsui’s novels. Paprika was ultimately disappointing — spectacular though much of it is, the whole is less than the sum of its parts — but the premise, more fully developed in a book, could be interesting. Toki wo Kakeru Shoujo, a better movie, is a sequel of sorts to another of Tsutsui’s novels. I was curious about him, so I checked Amazon.com to see what was available. Although he is called Japan’s Isaac Asimov, little has been translated into English. There’s a series of Telepathic Wanderer manga, an out-of-print collection of “psychic tales” and Salmonella Men. ((Checking Amazon.com just now, I discovered that there is a newly translated Tsutsui book out, Hell.))

Tsutsui’s stories aren’t much like Asimov’s. In “Rumors About Me,” the narrator finds that his daily activities are the subjects of newscasts and televised panel discussions and are written up in newspapers. In “Don’t Laugh,” an inventor devises a time machine and can’t stop laughing. In “Hello, Hello, Hello!” a self-apppointed financial advisor exhorts the inhabitants of a block of apartments to greater frugality, emerging without warning from the next room, the wardrobe or the toilet to confront the narrator before he wastes any more money. In general, there is little extrapolation and plenty of absurdity. Tsutsui is primarily a satirist in this collection.

Some of the stories are better than others. The least interesting to me is “Bravo Herr Mozart!”, a nonsensical biography of the composer: “Mozart was born at the age of three. The reason for this is not known. He was born in his father’s house in Salzburg — probably because he didn’t have a mother.” Etc. YMMV. There are several others I’m not likely to revisit. Most, however, are quite readable.

I’m pleased see that The Kawaii Menace is now included at Anime Nano. I’m also a bit embarrassed that my first post listed there had nothing to do with anime, and that this one is only tangentially anime-related.