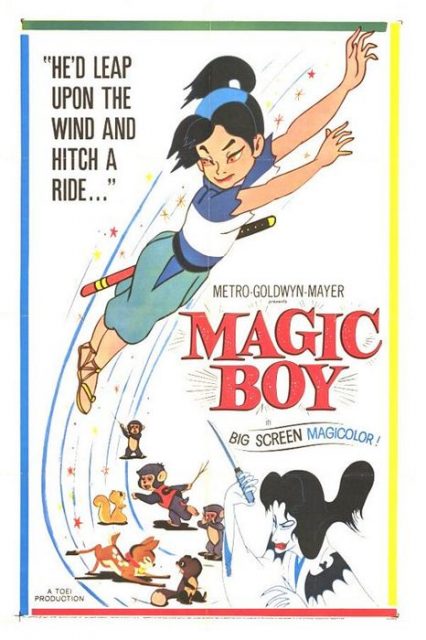 One Saturday afternoon back before the last ice age, when I was very young, my then-girlfriend Gloria and I walked to the town theatre and watched a Japanese movie called Magic Boy. It was exciting, colorful, fantastic in every sense. It made all the Disney movies I had seen seem like pablum. I thought it was the greatest movie ever made, and I wanted to go to Japan and learn magic.

Some months later, I watched Forbidden Planet, and that was the greatest movie ever made. As the centuries passed, I gradually forgot about Magic Boy.

Several years ago, when I discovered anime by way of Princess Mononoke, I recalled that I had seen some Japanese animation back in prehistoric times. I did a little research and determined that film was Shonen Sarutobi Sasuke, which was the first anime to get a theatrical release in the USA. Although it’s apparently still under license, it’s not available in any form in region one that I’ve been able to find. I’ve periodically checked for torrents, but I never found a live one until a week ago.

Sasuke and his older sister live in the Japanese countryside with monkeys, deer, squirrels and bears. One day he encounters a giant salamander, who turns out to be an evil witch intent on causing as much suffering as possible. Sasuke resolves to defeat her, and leaves his home to learn magic. After taunting the leader of a group of bandits and meeting the witch again, he learns martial arts and magic from an old hermit living high on a steep mountain. Meanwhile, the bandits burn and pillage a town, and the lord of the region takes an interest in Sasuke’s sister. There are plenty of swordfights and magical battles, and good eventually triumphs over evil.

So, is it indeed the greatest movie ever made? Maybe, if you’re seven years old. Better than Disney? I haven’t seen anything from the Mouse in centuries so I can’t really say, but in terms of production values, probably not. Is it worth watching? Yes. Beyond its historical significance, it’s a simple but entertaining story told in a straightforward manner with energy and humor.

The version I found is dubbed in three languages. The English soundtrack sounds at times like it was recorded underwater. The story and characters are uncomplicated enough that you can watch with the Japanese soundtrack without getting too lost, and the music is better, too.