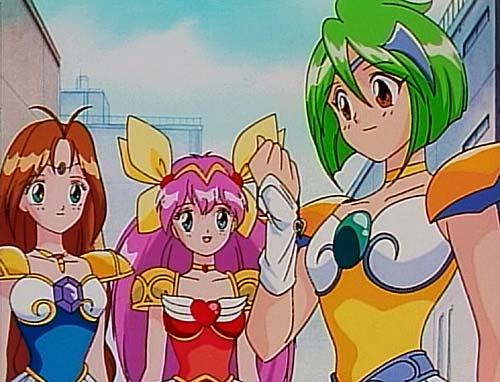 Different magical girls have different specialties. School girl Momoko Hanasaki, along with her friends Yuri and Hinagiku, is a “love angel.” When agents from the demon world possess humans in attempts to destroy the happiness of those in love, Momoko transforms into “Wedding Peach” and tells the demons that she is extremely displeased. Then she exorcises them with attacks powered by her Love Wave.

I first read about Wedding Peach at T.H.E.M. Anime, where it was invariably mentioned with scorn. As I recall, the review there said it was stupid enough to cause brain damage in children. (That review has since been replaced by a more temperate, but still snide, assessment.) I figured that this was a series I could skip. However, I noticed that reviews elsewhere were more positive. The comments on this thread at Steven’s piqued my curiousity, and when I noticed that the discs were on sale for $4 each, I figured that it might be worthwhile to watch the first and see just how bad it is.

Actually, the first six episodes are quite watchable. Wedding Peach is plainly modeled closely on Sailor Moon (not that surprising, given that the character designer and one of the writers are alumni of the earlier show). However, thus far it seems to be not so much a cheap ripoff of Sailor Moon as Sailor Moon done right. Momoko is not a stupid ditz like Usagi. When she and her friends invoke their superpowers and battle the forces of evil, they’re competent. They don’t have to be rescued every episode by a mysterious yet dorky guy wearing a mask. It’s clear early on that the guy with whom Momoko regularly quarrels is destined to be her romantic interest, and it’s clear to them as well, though they won’t admit it.

It’s also ridiculous. Each of the three girls undergoes a double transformation in becoming a love angel, First she magically dons a wedding gown, which she then changes to a much-abbreviated combat dress. I’ve posted Momoko’s transformation on my video weblog. The long-term story apparently involves finding the evocatively-named “Saint Something Four.” Tongues were in cheeks when this show was made.

I haven’t decided if I’m going to watch the rest of it. It’s not exactly great art. There are any number of better shows available, and unless you have a special interest in magical girls, I don’t recommend it. It’s probably not even that good a substitute for Sailor Moon. Part of the appeal of the latter is the intricacy of the universe developed over the course of five seasons of anime, eighteen tankoubon of manga, three movies, a live-action show and a series of musicals. Wedding Peach offers only a mere 51 episodes plus four OVA episodes.

2 thoughts on “The real Ai no Senshi”