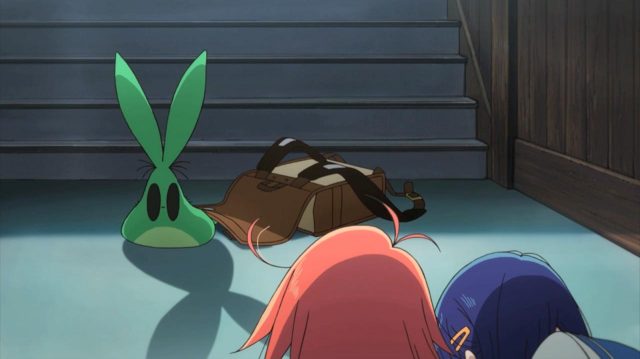 Cocona’s green rabbit in Flip Flappers is named “Uexküll” in both the Crunchyroll and Viewster subtitles. That doesn’t seem like a traditional Japanese name, so I did a little searching and discovered theoretical biologist Jakob von Uexküll. According to Wikipedia,

Uexküll was interested in how living beings perceive their environment(s). Uexküll argued that organisms perceived the experience of living in terms of species-specific, spatio-temporal, ‘self-in-world’ subjective reference frames that he called Umwelt (translated as milieu, situation, embedding-lit. German for environment). These Umwelten (plural of Umwelt) are distinctive from what Uexküll termed the “Umgebung” which would be the living being’s surroundings as seen from the likewise peculiar perspective or Umwelt of the observer. The umwelt is composed of two parts, the innenwelt or self-oriented features, and the Umgebung, or world-oriented features. Together, they describe the individual’s subjective viewpoint, or embedding, which has the property of being ubiquitous, as compared to the observer’s objective viewpoint, which has the property of being universal.

Um, okay. Possibly Uexküll’s Umwelt and Umgebung lurk in Pure Illusion as Faust does in Madoka Magica, though it will take someone with more patience with modern philosophy than I have to explain it all.

One thought on “Biosemiotic footnote”