Kansas, according to L. Frank Baum:

When Dorothy stood in the doorway and looked around, she could see nothing but the great gray prairie on every side. Not a tree nor a house broke the broad sweep of flat country that reached to the edge of the sky in all directions. The sun had baked the plowed land into a gray mass, with little cracks running through it. Even the grass was not green, for the sun had burned the tops of the long blades until they were the same gray color to be seen everywhere. Once the house had been painted, but the sun blistered the paint and the rains washed it away, and now the house was as dull and gray as everything else.

When Aunt Em came there to live she was a young, pretty wife. The sun and wind had changed her, too. They had taken the sparkle from her eyes and left them a sober gray; they had taken the red from her cheeks and lips, and they were gray also. She was thin and gaunt, and never smiled now. When Dorothy, who was an orphan, first came to her, Aunt Em had been so startled by the child’s laughter that she would scream and press her hand upon her heart whenever Dorothy’s merry voice reached her ears; and she still looked at the little girl with wonder that she could find anything to laugh at.

Uncle Henry never laughed. He worked hard from morning till night and did not know what joy was. He was gray also, from his long beard to his rough boots, and he looked stern and solemn, and rarely spoke.

Kansas, according to Oz no Mahou Tsukai: 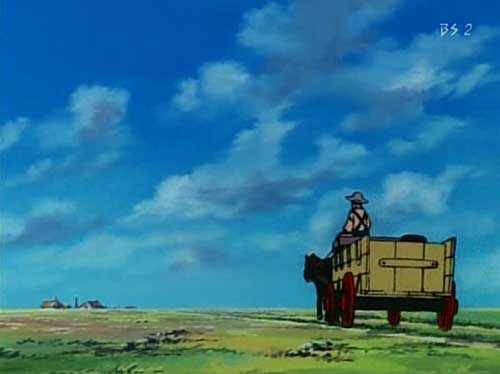 I’ve lived in Kansas for the larger portion of my life, and I’ve never seen Baum’s grey Kansas. During tornado season (March through June), it’s mostly green. Although joyless grey people do exist in the plains states, they can be found anywhere. They’re not specifically prairie phenomena. 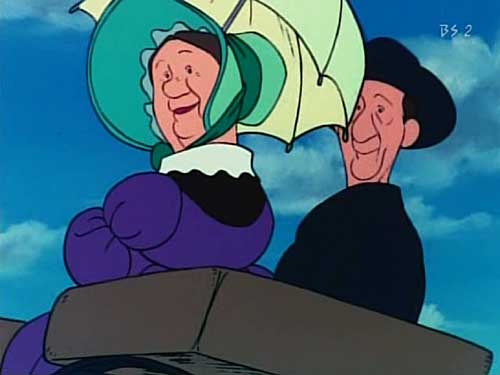 Only the first episode of Oz no Mahou Tsukai (1986) has been subtitled. It’s watchable but not outstanding. If a group decides to fansub the remaining 51 episodes, I’ll probably download them for my nephews and nieces, but if they remain untranslated, it will be no great loss.

6 thoughts on “Grey and green”