1. A French term meaning “black film,” or film of the night, inspired by the Series Noir, a line of cheap paperbacks that translated hard-boiled American crime authors and found a popular audience in France.

Nearly every scene in Odd Taxi takes place during the evening or night. Check.

2. A movie which at no time misleads you into thinking there is going to be a happy ending.

As of episode six, several characters are heading toward various disasters, and all face complicated problems. Odokawa will do well merely to survive. Check.

3. Locations that reek of the night, of shadows, of alleys, of the back doors of fancy places, of apartment buildings with a high turnover rate, of taxi drivers and bartenders who have seen it all. 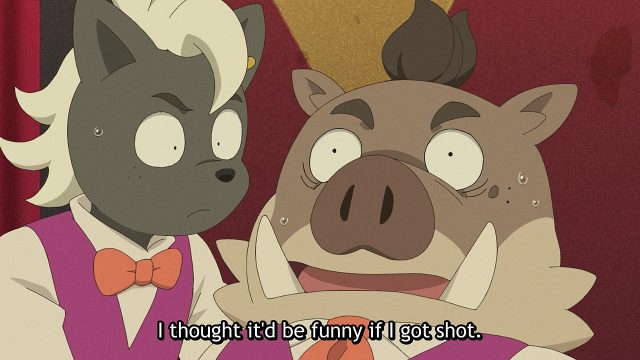 4. Cigarettes. Everybody in film noir is always smoking, as if to say, “On top of everything else, I’ve been assigned to get through three packs today.”

Nope. The last anime in which characters unapologetically smoked was The Wind Rises. Sanctimonious scolds have sanitized anime.

5. Women who would just as soon kill you as love you, and vice versa.

Does the pretty alpaca tell the whole truth when she talks with the walrus? Hmmm. A tentative check.

6. For women: low necklines, floppy hats, mascara, lipstick, dressing rooms, boudoirs, calling the doorman by his first name, high heels, red dresses, elbowlength gloves, mixing drinks, having gangsters as boyfriends, having soft spots for alcoholic private eyes, wanting a lot of someone else’s women, sprawling dead on the floor with every limb meticulously arranged and every hair in place.

Shirakawa’s nurse uniform doesn’t give her much chance to exhibit sleazy glamour, but she may qualify on one or more of the other characteristcs. Half a check. 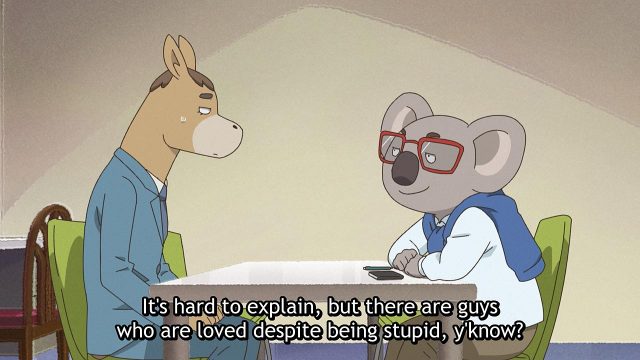 7. For men: fedoras, suits and ties, shabby residential hotels with a neon sign blinking through the window, buying yourself a drink out of the office bottle, cars with running boards, all-night diners, protecting kids who shouldn’t be playing with the big guys, being on first-name terms with homicide cops, knowing a lot of people whose descriptions end in “ies,” such as bookies, newsies, junkies, alkys, jockeys and cabbies.

Odokawa wears a tiny cabbie’s hat on his enormous walrus head, not a fedora, and he has a place of his own, but he qualifies on other counts. Check.

8. Movies either shot in black and white, or feeling like they were.

Nope. According to the director, “We wanted to tell a realistic story about the human condition with cute animal visuals. If a heavy story has a cute-looking surface, it mitigates the feeling of gloominess and expands the scope of the story. We had confidence that the dissonance brought out by the contrast would be compelling.”

9. Relationships in which love is only the final flop card in the poker game of death.

Too soon to tell.

10. The most American film genre, because no society could have created a world so filled with doom, fate, fear and betrayal, unless it were essentially naive and optimistic.

Odd Taxi is Japanese, but there are few elements that don’t have an American counterpart. Check.

That’s a tentative six and a half checks, potentially seven and a half. I think we can call Odd Taxi “noir,” even if it does feature funny animals. But there really should be a cigarette on every lip. 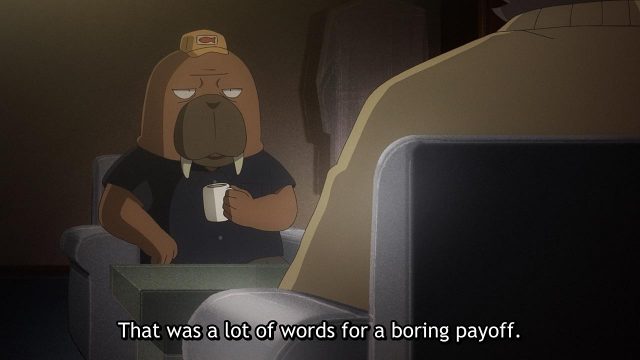