I just discovered that Terry Pratchett’s Wyrd Sisters was made into a movie. It’s not the Discworld novel I would have chosen — Granny Weatherwax is my least-favorite of Pratchett’s recurring characters, and I’d have preferred a good adaptation of The Light Fantastic ((The title was deliberately chosen to annoy Robbo.)) — but it’s still funnier than most alleged comedies. Chrstopher Lee is a resonant Death, though his voice doesn’t have “all the warmth and colour of an iceberg.” Although Wyrd Sisters is animated, Nanny Ogg’s abundant presence renders it not quite suitable for children. She sings a bit of her hedgehog song, too. 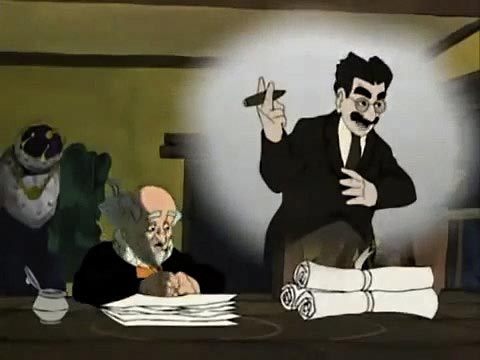 There are some things in the movie that I don’t remember from the book.

Update: It turns out that a lot of Pratchett has been dramatized, and much of it is available and inexpensive — downright cheap, sometimes, if you buy used. I just ordered these:

The Colour of Magic (which also adapts The Light Fantastic ((“You know when we were flying and I was worried we might hit something in the storm and you said that the only thing we could possibly hit at this height was a cloud stuffed with rocks?”
“Well?”
“How did you know?”)) )

There’s also a Discworld calendar, but since I already have four other 2015 calendars ordered, I think I’ll pass.