It’s February 2 today, when the students at the University of Dallas traditionally drink beer in the chilly drizzle at Forker Field (do they still do that?), and when bloggers post favorite poems if they remember to. So, here’s “Macavity, the Mystery Cat,” which I recited to my bored and fidgety classmates at grade school #4.

Macavity’s a Mystery Cat: he’s called the Hidden Paw—
For he’s the master criminal who can defy the Law.
He’s the bafflement of Scotland Yard, the Flying Squad’s despair:
For when they reach the scene of crime—Macavity’s not there!

Macavity, Macavity, there’s no one like Macavity,
He’s broken every human law, he breaks the law of gravity.
His powers of levitation would make a fakir stare,
And when you reach the scene of crime—Macavity’s not there!
You may seek him in the basement, you may look up in the air—
But I tell you once and once again, Macavity’s not there!

Macavity’s a ginger cat, he’s very tall and thin;
You would know him if you saw him, for his eyes are sunken in.
His brow is deeply lined with thought, his head is highly domed;
His coat is dusty from neglect, his whiskers are uncombed.
He sways his head from side to side, with movements like a snake;
And when you think he’s half asleep, he’s always wide awake.

Macavity, Macavity, there’s no one like Macavity,
For he’s a fiend in feline shape, a monster of depravity.
You may meet him in a by-street, you may see him in the square—
But when a crime’s discovered, then Macavity’s not there!

He’s outwardly respectable. (They say he cheats at cards.)
And his footprints are not found in any file of Scotland Yard’s.
And when the larder’s looted, or the jewel-case is rifled,
Or when the milk is missing, or another Peke’s been stifled,
Or the greenhouse glass is broken, and the trellis past repair—
Ay, there’s the wonder of the thing! Macavity’s not there!

And when the Foreign Office find a Treaty’s gone astray,
Or the Admiralty lose some plans and drawings by the way,
There may be a scrap of paper in the hall or on the stair—
But it’s useless to investigate—Macavity’s not there!
And when the loss has been disclosed, the Secret Service say:
‘It must have been Macavity!’—but he’s a mile away.
You’ll be sure to find him resting, or a-licking of his thumbs,
Or engaged in doing complicated long division sums.

Macavity, Macavity, there’s no one like Macavity,
There never was a Cat of such deceitfulness and suavity.
He always has an alibi, and one or two to spare:
At whatever time the deed took place—MACAVITY WASN’T THERE!
And they say that all the Cats whose wicked deeds are widely known
(I might mention Mungojerrie, I might mention Griddlebone)
Are nothing more than agents for the Cat who all the time
Just controls their operations: the Napoleon of Crime! 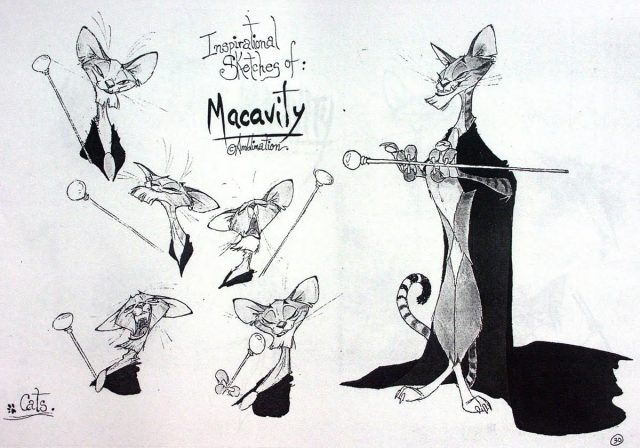 In a comment on a recent post, Fillyjonk mentioned that there were plans to give Cats a traditionally-animated movie version, with Steven Spielberg at the helm. While I would have preferred that Lloyd Webber et al had left Eliot’s poems alone, this probably would have been preferable to the recent movie. If nothing else, the sketches of Macavity more closely approximate my mental image of the feline Moriarty than the thug of the stage version.

One thought on “Outwardly respectable”