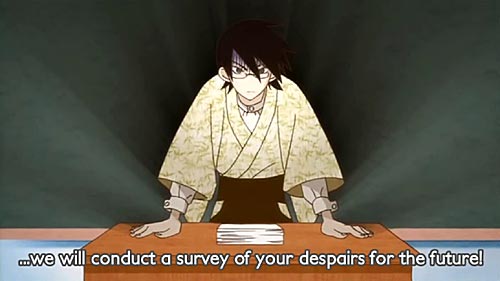 In Sayonara Zetsubou Sensei, or So Long, Mr. Despair, the pessimistic teacher Nozomu Itoshiki, who begins each episode with a suicide attempt, discovers the implacably optimistic girl Fuura Kafuka (does that name sound familiar?) in his class. Her classmates through the second episode include a hikikomori, an obsessive-compulsive perfectionist, a girl who communicates only through text messaging, and a stalker; undoubtedly there will be many other healthy-minded young people to meet in the remaining ten episodes of this grim farce.

The opening is the cheapest I’ve seen, just text with do-it-yourself music. Overall, I would describe the production as economical, if occasionally elegant in its low-budget way. It suits the one-dimensional characters and absurd stories well. The show is noteworthy for its graffiti: the chalkboard features comments and wisecracks from Koji Kumeta, the artist responsible for the manga on which the anime is based. There are also jokes for otaku, though the show doesn’t depend on them the way Lucky Star and Hayate do.

Sayonara Zetsubou Sensei is obviously not for everyone. I’ve uploaded the first eight seconds of the first episode to my video weblog. If you find it amusing, you might want to check out the series. 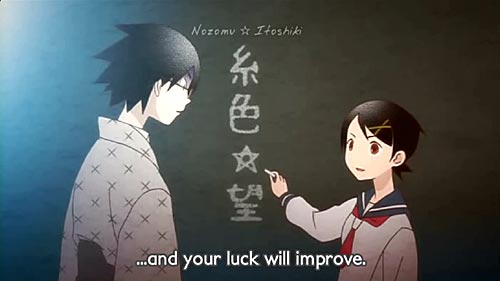 Update: Astro is also watching Sayonara Zetsubou Sensei, and he has many more screen captures. (I would guess that the guy whose face turns up in all the odd places is Kumeta.)

Update II: It occurs to me that SZS is anime as Edward Gorey would have done it.

This is likely my last substantive post for a while. I picked up Harry Potter #7 yesterday (I want to see for myself what happens before anyone spoils it for me), which will probably take care of the rest of today. Tomorrow my New Toy is scheduled to arrive, and that will occupy all my free time for a week or two or three. I’ll be back eventually, and perhaps by then there will be fresh episodes of Denno Coil, Oh! Edo Rocket and maybe even Master of Epic waiting for me.

One thought on “Pink Supervisor”