A few recently-spotted items worth quoting:

But these days the wages of sin is boredom.

Well, I could argue that a proper understanding of punk and its inherent rebellion would have everyone becoming a libertarian or principled conservative …

— Mollie Hemingway (in the comments)

The last is from a thread about the “Weirdest Band You Love.” It’s hard to pick the strangest of my many musical enthusiasms, but the Sons of Rayon might be the most obscure. The inventors of velco tap dancing (fiddler/guitarist Kelly Werts glued velcro hooks on the soles and heels of his shoes and danced on a patch of tightly-woven carpet, which was miced, creating sound when his feet left the platform), the Bill Monroe-meets-Robert Fripp trio was active in Wichita for several years around 1980. They released one cassette, No Velcro, which was one of the first items I digitized when I hooked up my computer to the stereo. Here is perhaps their loveliest song, written and sung by banjoist Paul Elwood and featuring Intergalactic Yodeling Champion Randy Erwin, “UFOs Over New Zealand.”

(Assembled by one of the denizens of Eruptions.) 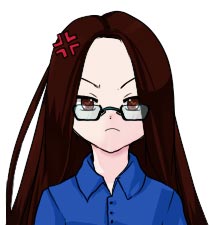 Pixy found a cute avatar generator. The picture above is sorta what I looked like when I was young and irritable.