John C. Wright recently quoted R.A. Lafferty. Coincidentally, I spent part of the day moving all my Gene Wolfe and Lafferty books to their own bookcase. Over the years I’ve accumulated a bunch, most of them acquired on my regular visits to second-hand book stores.1 Around the turn of the century, Lafferty’s books disappeared even from used sources. I found a volume or two and some pamphlets from mail-order sources2, but pickings were slim.

Fortunately, now, about 30 years too late, there finally is a good introduction to the most original writer of the 20th century. The Best of R.A. Lafferty is available in the U.S. The table of contents is here; the book includes most of the essential stories.3. If you’ve ever been curious about this teller of tales unlike other tales, this is a good place to start. 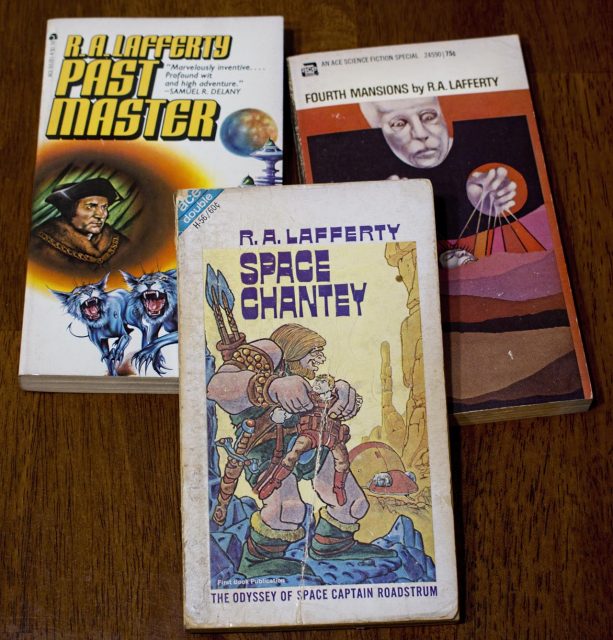 Three of Lafferty’s early novels have also recently been reissued in a single volume. It’s been a long time since I read Past Master or Fourth Mansions, so I can’t say much except that I didn’t like them as much as the better short stories. They’re due for a re-reading; I might find more in them now. However, Space Chantey, Lafferty’s retelling of The Odyssey, is one of Lafferty’s funniest books and an old favorite.

“All right, girl,” Roadstrum said when they were alone. “I have a few questions. They will be to the point, and I want answers.”
I doubt that you could understand the answers,” Aeaea warned. “I see now that you are a common simpleminded man, and we maintain a very high intellectual average here. It will be difficult to communicate.”
“Who is the ‘we’ that maintains so high an average, girl?”
“Only myself now. My father has been dead these last several centuries.”
“It should be easy to maintain a high average with only one entity.”
“It is. I am mistress of all the sciences. I go so far beyond all else that my work is called magic. I manipulate noumena, regarding monads as points of entry tangential to hylomorphism. As to the paradox of Primary Essence being contained in Quiddity, the larger in the small, I have my own solution. The difficulty is always in not confusing Contingency with Accidence. Do you understand me?”
“Sure. You’re a witch.”
“Exactly, but I frown on the name. Very unscientific.”

I have several duplicate Lafferties on my shelves that need homes. If you are interested, send me an email. Please include “Lafferty” in the header so I don’t delete it with the blackmail spam and other digital trash.

One thought on “Postcards from Boomer Flats”