Josh has seen fit to present me with another award. This time it’s the “Dragon’s Loyalty Award.” Gee, thank you, Josh. It’s a great honor, etc., etc., etc. Someday I may forgive you. 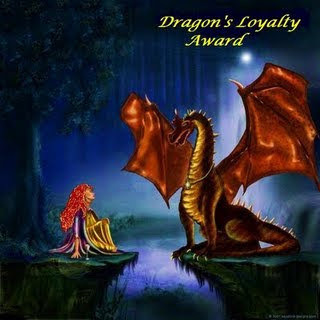 These are the rules:

1. Display the award on your blog.
2. Announce your win with a post and denounce thank the blogger who awarded you.
3. Present 15 deserving bloggers with the award.
4. Link your awardees in the post and let them know of their being awarded.
5. Write seven interesting things about yourself.

These “awards” are a bit too much like chain letters, and I’m not going to pick 15 more suckers. Anyone listed in my blogroll is worthy of an award. If this exercise looks like fun, feel free to participate.

I’m running out of fascinating trivia about myself. ((The most interesting facts about me are none of your business.)) Let’s see, what haven’t I mentioned before?

1. I had piano lessons as a kid, but they didn’t take. When I was around 20, I got tired of being musically illiterate, so I bought an old upright and found a teacher. Later I took a couple of semesters of music theory at the university. I would have taken more, but the theory classes were scheduled for the convenience of freshman music majors, not non-major upperclassmen with jobs and complicated schedules.

3. I deliberately mis-matched my socks during my college years. Similarly, I often wore parti-colored hose when I was active in the SCA.

4. I prefer the fragrance of dianthus to that of roses.

6. When I was 7, 8, 9, 10 years old, I wandered all over Brigham City, Utah, sometimes with friends, more often alone. Sometimes my friends and I rambled around the lower slopes of the mountain east of town, or we rode our bikes to campgrounds in the canyon to the southeast. I’d pack a lunch and spend entire days at the town park by myself. When I was 11, I explored much of San Francisco north of Golden Gate Park on my bike. I could ride to Baker Beach from home in five minutes, and I’d usually have the sands all to myself. Present-day opponents of free-range parenting would have been aghast.

7. I’ve had fun with depression throughout my life. I rarely mention it because, well, it’s depressing, and others have faced worse and written better about their experiences. I figure it cheated me of about ten years of my youth. Little blue pills have made life a bit easier for me and those who must deal with me. ((This is not a request for advice or inspirational messages. I most likely will never allude to the subject again.))

One thought on “Something about a dragon?”