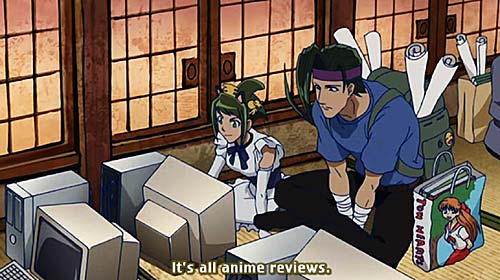 Edo cyber café, circa 1842. The otakusphere has been around longer than I had realized.

There’s still little time for anime. The only current series I’m up-to-date on is Oh! Edo Rocket (or Oedo Rocket, or Ohedo Rocket). ((Though I download Denno Coil and Seirei no Moribito as new episodes become available)) Eighteen episodes have now been subtitled, and it continues as off-the-wall as ever. The word is that the dramatic story is concluded in the twentieth episode and the remaining six focus on comedy, which is fine with me.

The soundtrack is distinctive. About half of it is big-band swing; the rest is mostly swing/rock hybrids, with a bit of pseudo-flamenco here and there. I don’t know how well it will sustain repeated listenings, but in small doses it’s fun. Here are a couple of examples:

(This tune recurs in different arrangements throughout the series. Another setting can be heard in the second video excerpt here.)

Speaking of soundtracks, I discovered yesterday that the other dealer is selling Geneon CDs for $5.99. This includes many outstanding OSTs — Haibane Renmei, Azumanga Daioh, Someday’s Dreamers, Noir, etc.