The next poll will probably be anime soundtracks: which is the best? There are the obvious candidates: Noir, Haibane Renmei, nearly everything by Yoko Kanno; and some less-obvious ones: Denno Coil, Oh! Edo Rocket, Mushishi. What other examples are worth considering? Please leave your nominations in the comments. Links to illustrative mp3s or videos will be helpful.

Note that this is about specific soundtracks and not who the best composer is. That is a topic for a future poll.

I’m going to let the anime babes poll run for another week or two. I’d like to see at least 200 votes before I close it and compile the top ten. Please vote if you haven’t already.

Update: I just checked that other dealer. Although the soundtracks to Haibane Renmei and Noir are gone, there are still many noteworthy OSTs available for $4, including Arjuna (the series itself looks like toxic waste, but Kanno’s score isn’t bad), Azumanga Daioh, Someday’s Dreamers and Utena (four eccentric CDs’ worth of the last — if nobody else nominates Utena, I will).

Poor neglected Eineus. She hasn’t yet received a single vote in the final round of “who’s the babe?” I’m trying to resist the temptation to campaign for or against particular candidates, but I will note that I think she has a better claim to be a proper babe than at least one who is headed for a top-ten finish.

I found an application that makes jigsaw puzzles from files on my computer and exports them as java applets. Eventually I’ll figure out how to embed them in my web pages. Until then, here are a couple made from screen captures that you can download and play with:

Update: I think I have the embedding working. I’m putting the picture from Rocket Girls that I filched from Steven below the fold because it is so large that it screws up the layout.

Update II: It works in Camino, but not in Safari or Firefox — you can see the puzzle, but you can’t manipulate the pieces. Grrr. I’ll have to find another solution. Until then, here’s the .jar file: Rocket girls.

Update III: My video site is now a a video and jigsaw puzzle site.

The tenth episode of Macademi Wasshoi is more of the same, with the students and faculty of the magical academy running amok while rescuing Takuto and the girls from a trio of formidable bandits. Then, about twenty-minutes into the episode, it suddenly gets very serious, and Anyone Can Die. The eleventh episode continues in the same grim vein, and there’s another death (or two, depending on how you count). It soon turns out that they’re Not Quite Dead, but now the story veers off in another unfunny direction, borrowing a motif from the final episode of Petite Princess Yucie and the forty-sixth episode of Cardcaptor Sakura. Hitherto, Macademi Wasshoi was a farce with occasional thoughtful moments. Now it’s a drama, with Sakuma and the girls as annoying comic relief.

The episode ends happily with a restoration of the status quo, but the fun has leaked out. The final episode, in which the girls try to get a Christmas present for Takuto, might have been enjoyable earlier in the series, but following the eleventh episode, it seems off-key.

So, do I recommend Macademi Wasshoi? Yes, with reservations. It’s funny and inventive overall, but it’s also frequently off-color with abundant fanservice. If it sounds like something you would like, I recommend watching the tenth and eleventh episodes last.

Update: Steven liked the eleventh episode a lot. There is a lot going on there and a lot more that’s hinted at, as Steven points out, but the shifts in tone are too jarring for me.

Laplace, not Laplus. (From Macademi Wasshoi #11, about which I’ll complain later.)

Below the fold is the same brief video as in the previous post, this time as an flv file. In the past, I’ve used ffmpegX to generate flv files. It works, but it’s a pain to use. It often takes several tries to convert a Quicktime file to flv, and even then the video and sound are apt to drift out of sync. (See my video weblog for examples.) I was wondered if it was possible to skip the formatting headaches and embed Quicktime files in posts, but that presents a different set of problems. I recently found a couple of WordPress plugins that take care of the messy stuff, which I tested in yesterday’s post. They work, but it turns out that at least two of my readers, and probably quite a few more, refuse to install Quicktime on their computers. So embedding a Quicktime file is not an ideal solution.

This morning I looked for alternatives to ffmpegX and found a few. Some of them look dandy. Unfortunately, either the price tags have three digits to the left of the decimal point, or the system requirements are beyond the capabilities of my geriatric Mac. I did find one possibility, On2 Flix, the cheapest version of which is almost affordable at $39. I downloaded the demo, and it worked right the first time. You can see the results below the fold.

END_OF_DOCUMENT_TOKEN_TO_BE_REPLACED

Let’s see if I can embed a QuickTime video. Below the fold is a kawaii moment from Macademi Wasshoi #3.

END_OF_DOCUMENT_TOKEN_TO_BE_REPLACED 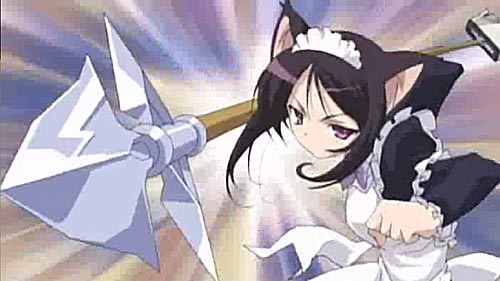 … If I counted correctly, there are three groups subbing Clannad –After Story–, Chaos;Head, Shikabane Hime and Ga-Rei Zero. Four are working on Akane-iro ni Somaru Saka and Tytania, five on Yozokura Quartet, six on Toradora! and eight on Tales of the Abyss. But apparently no one cares about the rest of Macademi Wasshoi.