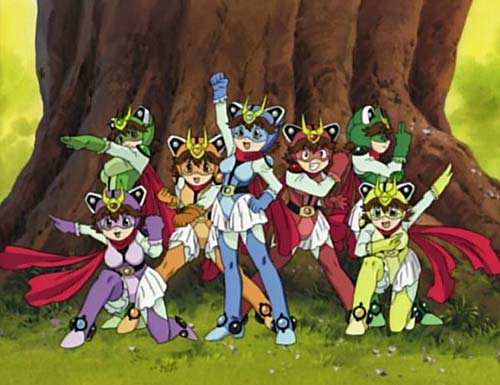 I’ve just added Seven of Seven to my buy list (though it will have to wait awhile):

Another thing that’s interesting is that they’re using a lot of Scott Joplin in the soundtrack. I think it works, too. It’s refreshing, and it does tend to support a light feel to the show. Joplin isn’t ponderous and certainly isn’t slow or depressing.

I used to play Joplin half a lifetime ago when my fingers were in shape. Using his music in the soundtrack could backfire, of course. I hated The Sting partly because I disliked Hamlisch’s arrangements. I hope Yoshihisa Hirano uses the original piano scores.

Incidentally, while most of Scott Joplin is lively and cheerful, he did write a few slow pieces, e.g., “Solace,” and some of his later rags, while not depressing, do leave a bitter aftertaste, e.g., “Scott Joplin’s New Rag.” 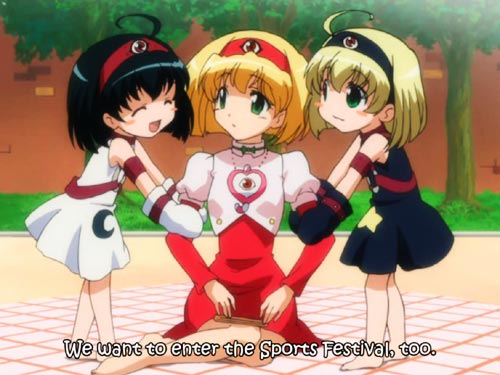 What’s the name of this weblog?

Steven’s recent discovery reminds of the punchline of an old Koren cartoon: (said of a movie) “The sex wasn’t much, but the violence was wonderful.” I don’t have much to add to what Steven says, except to note that there are also four brief omake episodes. Punie takes her friend Tetsuko on a visit to Magic Land. It is indeed the kind of place that Punie would call home. I’ve posted the opening of Dai Mahou Touge on my video weblog. 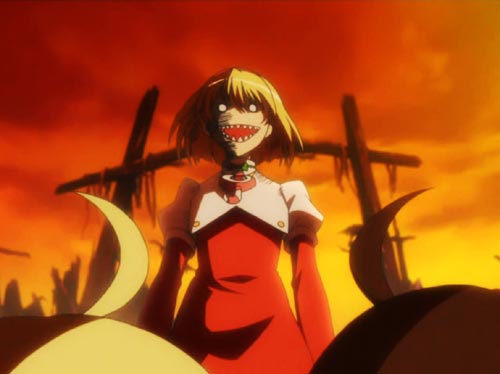 Mahou Shoujo Tai Alice, a.k.a. Tweeny Witches, has just been licensed. I watched the first several episodes a year or so ago and wasn’t sure what I thought of it. It certainly has a distinctive Studio 4°C look, but the main character is nearly as fatuous as Fuura Kafuka. People who like the series like it a lot, though, so I may give it a second chance.

I do like the closing theme. Here’s the full-length version, sung by KOTOKO. You might recognize the melody. 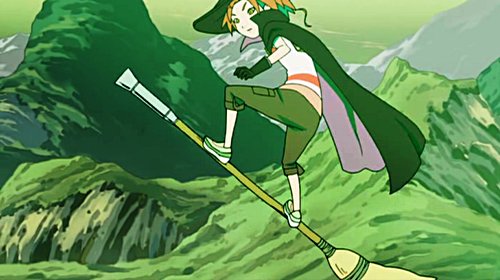 Another way to ride a broom

GreyDuck recently posted nearly an hour’s worth of his favorite music on his site. I thought I’d do something similar, in case anybody is curious about what I listen to. Here are nine tunes I like in batches of five and four. I picked mostly shorter tunes, so the total time is about twenty-two minutes. My tastes run toward the obscure and the eccentric (hence my interest in anime); if anyone recognizes more than one or two of these, I will be impressed. No matter how broad your tastes are, there is sure to be something here to annoy you.

Update: Identifications below the fold.

END_OF_DOCUMENT_TOKEN_TO_BE_REPLACED

Hatune Miku, a “vocal android” suited for J-pop and anime songs, might be a lot of fun to play with. Unfortunately, she’s Windows-only at this time. (The Vocaloid website doesn’t list a release date for the Mac AU version, but I can hope.)

When I first started fooling around with music on computers, one of my projects was to make my own primitive version of Switched-on Bach. I arranged Bach’s two- and three-part inventions and a few other things for software synths and sequencer. I recently unearthed the CD I recorded. It hasn’t aged well, but some of it doesn’t hurt my ears. I’ve uploaded some selections to my music site for the curious. (Click on the little speaker icons next to the download link to preview the tunes.)

When I made these recordings five years ago, I used as wide a variety of synthesizers as possible. After making the selections, I was surprised to realize that the majority of arrangements I found still listenable used only one synth, FMHeaven, an emulation of the Yamaha DX7.

You probably didn’t want to know this, but The Chipmunks are still around. Nowadays, they do covers of anime themes. Here is their most recent release, which I just (cough) discovered, the theme to Seirei no Moribito:

I’ve posted the opening of Oh! Edo Rocket on the video weblog. I also a uploaded a clip of the “abacus dance.”

It was trivially easy to add the 1 Bit Audio Player to my music pages, so you don’t have to actually download the mp3s to sample the tunes, or whatever you want to call them.

I haven’t been able to get the mp3 player that Astro uses to work, so I’m experimenting with the 1 Bit Audio Player. Here’s a piece from the Denno Coil soundtrack. There should be a little speaker icon after the link. Click on it to hear the tune. If you don’t see it, or if the music doesn’t play, please let me know.