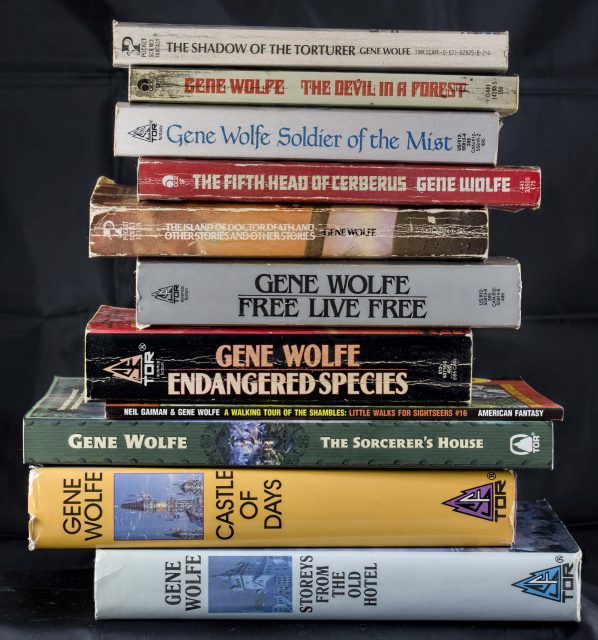 … I recall that when Damon Knight asked me back in the ’60s whom I was reading I wrote back and said “J.R. Tolkien, G.K. Chesterton and Mark’s Engineer’s Handbook.”

I’ve been meaning to write a short essay on Gene Wolfe, the last great American writer, who died last month. I don’t know when I’ll get it done, though, so here are a some notes and quotes instead.

I don’t remember which was the first Wolfe story I read. It might have been “Trip, Trap” in an early Orbit anthology. But the novella “The Fifth Head of Cerberus” made it clear to me that he operated on a level far beyond Asimov or Clarke in skill, imagination and depth. His stories improved with re-reading. His name in the table of contents was sufficient reason to purchase any anthology, and I bought every book of his as soon as it appeared in paperback.

… I’d argue that SF represents literature’s real mainstream. What we now normally consider the mainstream—so called realistic fiction—is a small literary genre, fairly recent in origin, which is likely to be relatively short lived. When I look back at the foundations of literature, I see literary figures who, if they were alive today, would probably be members of the Science Fiction Writers of America. Homer? He would certain belong to the SFWA. So would Dante, Milton, and Shakespeare. That tradition is literature’s mainstream, and it has been what has grown out of that tradition which has been labeled SF or whatever label you want to use.

Wolfe studied engineering in college, which is reflected in his obsession with the mechanics of fiction. He’s most notorious for his unreliable narrators, but that’s only one of the ways in which he plays with different ways of telling stories. The award-losing1 “The Island of Doctor Death and Other Stories” is written in the second-person, for instance. In many stories, he seems to test how much he can not tell and still be intelligible, or how obliquely he can approach the subject.

He expects the reader to pay attention to what he writes, every word. You can’t skim his novels, long though they are. If you miss the morning glories that briefly appear in Free Live Free, the story will make less sense. He counts on the reader to notice what he doesn’t say and to catch subtle inconsistencies. If you’re looking for easy escapism, Wolfe is not your guy.

The Book of the New Sun was initially inspired by cosplay. From the same interview:

It first came to me during some convention I was attending at which Bob Tucker was the guest of honor. For some reason Bob felt obliged to go to a panel discussion on costume, and since he wanted someone to accompany him, I went along (otherwise I wouldn’t ordinarily have gone since I’m not a costumer). So I went and heard Sandra Miesel and several other people talk about how you do costumes—how you might do a cloak, whether or not it’s good to use fire as part of your costume, and so forth. As I sat there being instructed I was sulking because no one had ever done one of my characters at a masquerade. It seemed as though I had done a lot of things that people could do at a masquerade; but when I started to think this over more carefully, I realized there were few, if any, characters who would fit in with what Sandra and the others were saying. That led me to start thinking about a character who would fit—someone who would wear simple but dramatic clothes. And the very first thing that came to mind was a torturer: bare chest (everybody has a chest, all you have to do is take your shirt off), black trousers, black boots (you can get those anywhere), black cloak, a mask, and a sword! Here was an ideal, easy SF masquerade citizen. All this stuck in my head somehow: I had this dark man, the personification of pain and death, but I didn’t yet know what to do with him. Then gradually a lot of things began to come together. For instance, I read a book about body snatchers that captured my fancy (body snatchers were the people who used to dig up corpses and sell them to medical schools for the students to dissect). And I also had in mind that it would be interesting to be able to show a young man approaching war. So I began to put things together: I could have my young man witness the body snatching scene that I was now itching to write; this same young man could be the guy who is pulled into the war; he could be a torturer, and so on.

I don’t understand everything Wolfe wrote. Even when the literal sense is clear, it can take considerable analysis and reflection to see what he is getting at. Sometimes his narrative strategies escape me. “Hour of Trust,” for example, ends powerfully, but it begins with a meticulous two-page description of the room where the primary action will take place. There are plants and foreshadowing, but I still don’t see the point of most of details.

(But there is this image: “To the right of the candelabrum on the right side of the doorway stood a heavy ‘library’ table with a blue vase full of fresh cinerarias, the blue vase and blue flowers against the blue wall producing a ghostly effect—the shadows of the vase and blossoms more visible and distinct than the things themselves.”)

Wolfe gave a number of interviews over the years. What he says is always worth reading, though sometimes you want to whack the interviewer with one of Wolfe’s heftier books. You can find many here.

A discussion of where to start, for those who haven’t yet read Wolfe.

Josh, who was raised by Wolfes in the jungle, has often written about Gene Wolfe.

The New Yorker on Wolfe.

I don’t want to give the impression that Wolfe is primarily a puzzle-master. He is first of all a storyteller, and a good one. Most of his fiction doesn’t require careful analysis to understand, and even his most abstruse writing is enjoyable on the surface level. You don’t need to solve riddles to enjoy his stories — usually. But the depths are there, waiting for the patient reader.

I do think that Wolfe likely is the last writer in English who can be called “great.” I can’t think of anyone else active of comparable ability and achievement, and I suspect that what’s left of our culture is too degraded to support the development of any more great artists. We’re past any Golden or Silver Ages, at the end of the Plastic Age and entering the Age of Recycled Cardboard. This is not to say that there aren’t writers worth reading. There are, but none I rate as highly as Wolfe.2

One thought on “The mechanical engineer of fantastic fiction”