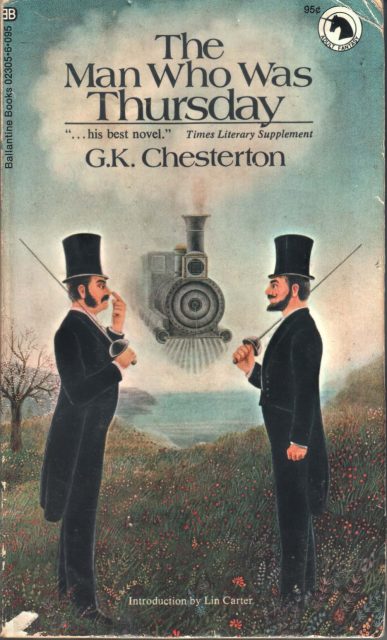 One of the books I (re)read during my recent trip was The Man Who Was Thursday. The cover of the 1971 paperback edition, above, depicts a moment from chapter X. Those who’ve read the book might amuse themselves by seeing how many errors they can spot.

Incidentally, Chesterton’s novel is possibly the most realistic spy novel ever published:

Thirty years ago, a British newspaper took an unscientific survey of current and former intelligence agents, asking them which fictional work best captured the realities of their profession. Would it be John Le Carré, Ian Fleming, Robert Ludlum? To the amazement of most readers, the book that won easily was G.K. Chesterton’s The Man Who Was Thursday, published in 1908….

… Soon, even police agencies themselves had no idea whether a given attack was the work of real terrorists, or of agents and provocateurs notionally working for the regime. In this wilderness of mirrors, the only certain facts were provocation and deception. “Was anyone wearing a mask? Was anyone anything?” However fantastic The Man Who Was Thursday might appear, it was describing the stark realities of counter-subversion, with all their moral ambiguities. And that was what gave the book its appeal to latter day spooks.