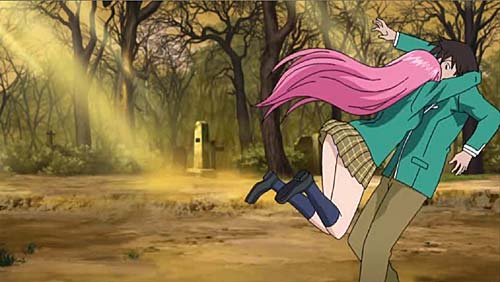 I have to give Rosario to Vampire credit for one bit of realism: when you have skirts as short as Moka’s, you’ve going to see panties. ((Mireille’s outfits in Noir were just as short, but her underwear was never visible — the single most implausible element in that amazing show.)) The vampire inspired J. Greely to coin a new word. Ubu thinks I should be “all over” R+V. Moka is indeed a candidate to replace Pyun and Potaru in the header art above, but I’m not sold on the series yet. The premise has some promise: nebbish winds up at a school for monsters and acquires a vampire glompire girlfriend. The cast features Kikuko Inoue in what looks to be a purely comic, non-weepy role as the nekomimi meganekko teacher; Takehito Koyasu is also listed. I’ll give it another episode and see what I think.

I’ll give Spice and Wolf another episde also to see what kind of story it’s going to be. The premise again has promise: wolf-girl and former agricultural deity in Medieval Europe hitches a ride with a travelling merchant intending to return to her homeland in the north. It could be an interesting travel story, or it could be nasty Christians oppressing nice pagans. The first episode suggests both possibilities. If it turns out to be the latter, the hell with it. Even if I decide to abandon the series, though, I will keep an eye out for the quasi-Renaissance soundtrack.

The second episode of Kaiketsu Zorori was on the same level as the first. Zorori and his boar sidekicks enter a haunted castle to rescue a sleeping princess. This time Zorori actually suceeds in his quest, but he is betrayed by his own impatience. It looks like Kaiketsu Zorori will be a good kid’s show that adults can also enjoy.

What I most enjoyed (re-)watching recently was the first disc of Kamichu! It’s a maddeningly erratic series, but the good episodes are very good indeed. I wish it was as easy to compile a custom video DVD as it is a custom music CD. A collection containing the first three episodes, the seventh and probably the ninth (I haven’t see it yet, but Steven says it’s excellent) would be a fine way to spend two hours.

6 thoughts on “Wolves, foxes and vampires”