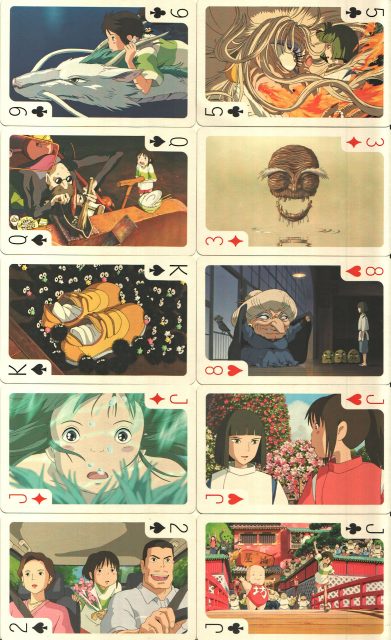 While I have little interest in most anime-related products, there are a couple of categories that I have found worth looking for. I’ve occasionally mentioned my annual searches for Japanese calendars. I also have a small collection of anime playing cards, which are much cheaper than figurines and more useful.

Unsurprisingly, the cards from Studio Ghibli are the best, both for the art and for the substance of the cards. Each card has a different picture, all printed at high resolution, and the cards are durable and easy to shuffle and deal. I have decks for Spirited Away and Princess Mononoke, and I’ll add others when circumstances permit. Right-click the images and open in a new window to see at full resolution. 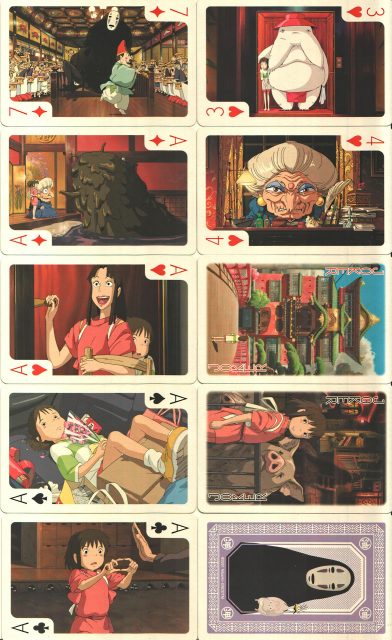 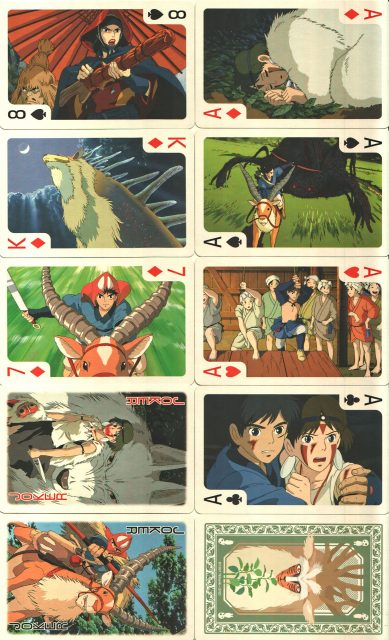 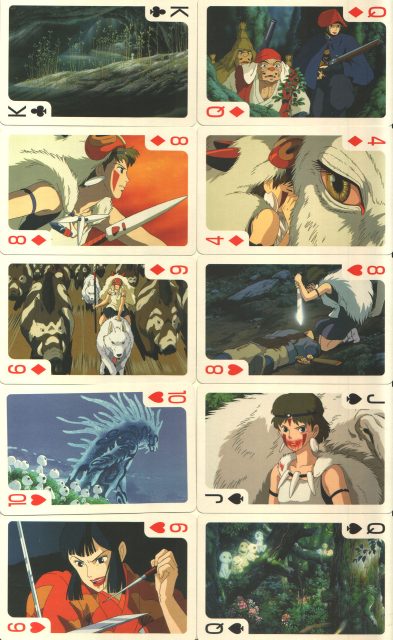 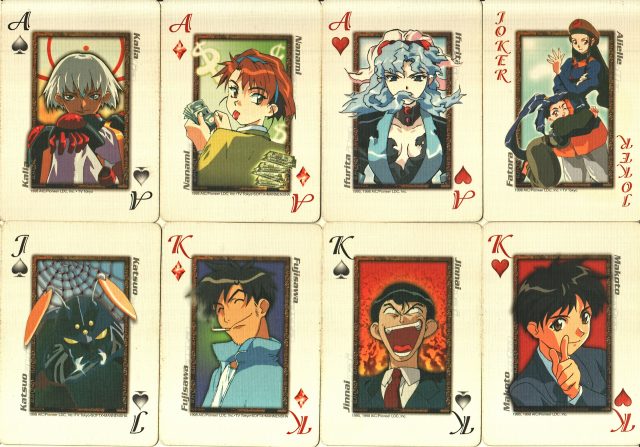 The El Hazard cards, the second set I ever bought, are also high-quality. While the number cards merely show clubs, diamonds, hearts or spades, each of the face cards has a different picture. These also are easy to shuffle and deal. 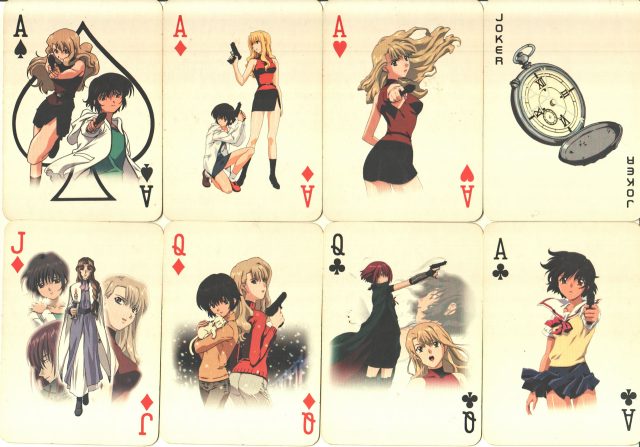 The Noir deck is similar to the El Hazard. 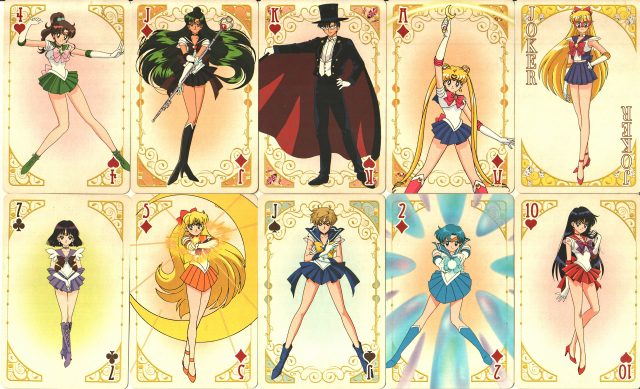 This particular Sailor Moon deck (there are several out there) has a different picture on each card, mostly the sailor scouts and their friends and enemies in various poses. However, unlike the Studio Ghibli decks, the cards don’t have a hard finish and probably won’t last long if actually used for playing bridge. 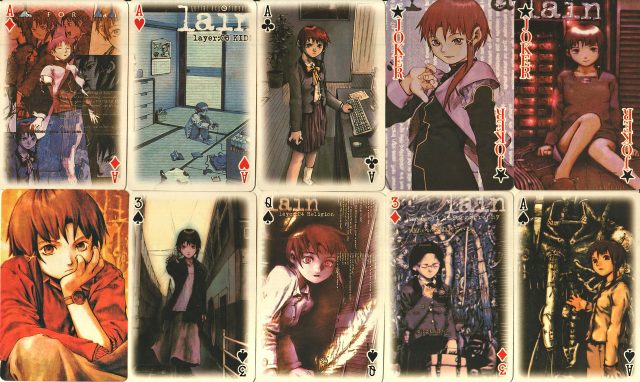 I began collecting these cards when I spotted this Serial Experiments Lain deck at a local anime convention. It’s probably an unauthorized bootleg. Each card has a different picture filched from ABe’s Lain art. The deck is difficult to shuffle and is the least playable of the anime decks. 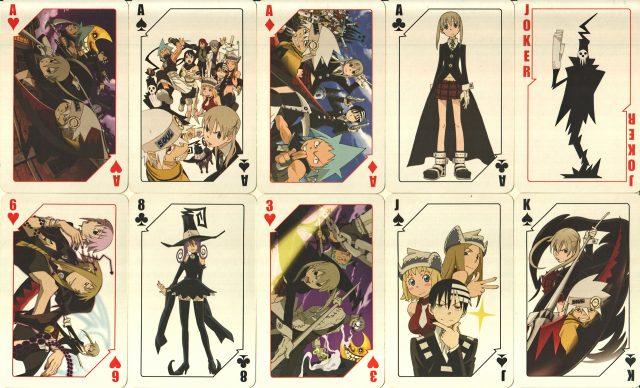 Like the Studio Ghibli and Sailor Moon decks, every card of the Soul Eater deck has a different picture, except for the four kings, which display the same image of Maka and Soul. It also probably won’t last long in regular use. 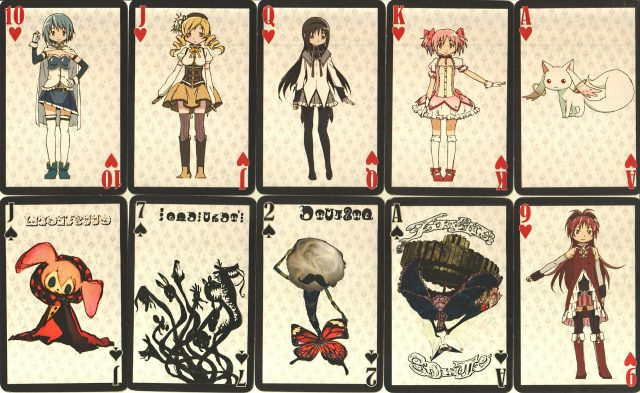 There are twenty-seven different pictures in the Mahou Shoujo Madoka Magica deck. The red suits feature the girls and Kyubey, the black suits eldritch abominations, and the joker is Kyubey. 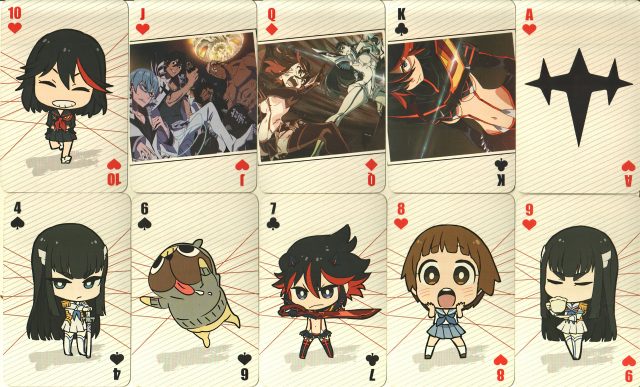 Last and least is the Kill la Kill deck. There are only three actual pictures used in the entire deck — one for the kings, one for the queens and one for the jacks. All the rest are mostly super-deformed sketches. Kill la Kill was one of the wildest, most over-the-top shows ever broadcast. It deserved better.