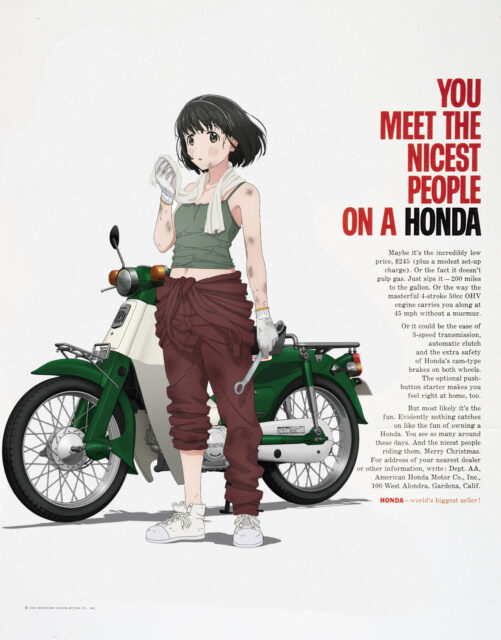 What sort of music do you associate with motorcycles? Something fast and furious, like Steppenwolf or The Rodeo Carburettor? Something with fiery guitar, like Joe Satriani or Jan Cyrka?

How about Debussy? The first music heard in the extended Honda commercial Super Cub is his thundering first “Arabesque.” Later in the first episode, when the protagonist goes on her first night ride, she putts along to the pounding beat of “Clair de lune.” Over the course of the twelve episodes there is more Debussy, plus additional piano music by composers from Beethoven to Schumann.1

Against my better judgement, I’ve taken out a membership at Crunchyroll again. While most current shows look like isekai drivel, there are some recent offerings that might be worth my time. Atomic Fungus liked Super Cub, so I started with that.

High school student Koguma states at the beginning of the first episode that “I have no parents. No money, either. Nor do I have any hobbies, anyone I can call a friend, or any goals for the future.” One day, after struggling up a long slope on her bicycle once too often, she stops by a motorcycle shop, where she purchases a Honda Super Cub for a suspiciously low price. One of her classmates turns out to be a Cub enthusiast, and suddenly the emotionally withdrawn Koguma has a friend. Over the course of the series Koguma learns how to ride and maintain her bike, finds a summer job, solves various problems associated with riding a motorcycle, and gradually becomes a more competent and sociable individual.

The series it most resembles is laid-back Yurucamp, with girls doing outdoorsy things, and featuring an introverted central character. There are significant differences, though. Yurucamp‘s Rin is a fundamentally healthy person who enjoys solitude, while Koguma’s isolation at the beginning of Super Cub is nearly pathological. The art and character designs in Yurucamp are more cartoony and the characters themselves more boisterous than their counterparts in Super Cub. And there is no Debussy in Yurucamp. Still, if you enjoyed watching Rin and the Outdoor Activities Club, Super Cub is worth checking out.

I can’t give the show an unreserved recommendation. In the tenth episode, after a snowfall Koguma and her fellow Cub enthusiast frolic on their motorbikes on a snowy field, taking lots of spills. Perhaps it’s not as dangerous as it looks, but it seems like an excellent way to break arms and collar bones. Immediately after that, another girl falls into a stream in freezing weather and calls Koguma for help. Rather than summon emergency services, Koguma carries the barely-conscious girl to her apartment on her motorbike and revives her there. The girl survives and her family is grateful to Koguma, but Koguma’s heroics nearly killed the poor girl.2 If you watch Super Cub, I suggest you stop at the middle of the tenth episode and skip to the twelfth.