Between banging out old tunes on the dulcimer and fixing my bike, I did find time to watch a few odds and ends this week.

Because of Pete’s advocacy, I watched the first two episodes of Manabi Straight again. Maybe I will view the rest, after all. The girls still look way too young, but you become inured to that, and while they act younger than high school students should, so do most high school students. I don’t know that I will like the show as much as Pete does, but I can say that it is more genuinely funny than Lucky Star.

I came across a subtitled “screener” of Paprika. I hope it gets a proper theatrical release in America, because this is one movie you definitely want to see on the big screen if at all possible. It’s a spectacular trip. How good it is, I haven’t decided. My snap judgment is that it’s very good, but the whole is less than the sum of its parts. Some of those parts are amazing, though, and Paprika is never less than entertaining at any time.

I just discovered that the new Kino no Tabi movie, The Beautiful World: Byouki no Kuni — For You, due out this Saturday, is directed by Ryutaro Nakamura and written by Chiaki J. Konaka. Nakamura directed the original anime series, and he and Konaka were members of the team that made Serial Experiments Lain. This sounds promising, and I’m curious to see it. (The earlier Kino movie, Life Goes On, was done by a different crew and is inferior to the TV series.)

I watched the second episode of Lucky Star. It was a little better than the first, but I’m still underwhelmed. I’ve never seen Seinfeld, so I don’t know how valid that comparison is, but it’s clearly inferior to Azumanga Daioh. AD gave us four memorable characters — Chiyo, Osaka, Sakaki and Yomi (six if you count Tomo and Yukari, but I’d like to forget them) — but Lucky Star features only one of any interest, Konata. One good character would be sufficient if the jokes were funny, and maybe they are, but for me they never rise above mildly amusing. Perhaps this is actually a brilliant show and I’m revealing one of my blind spots, but I probably won’t bother watching any more.

Congratulations to The LLama Butchers on their one-millionth hit. (I was #1,000,017, which is just as well, considering the prize.) 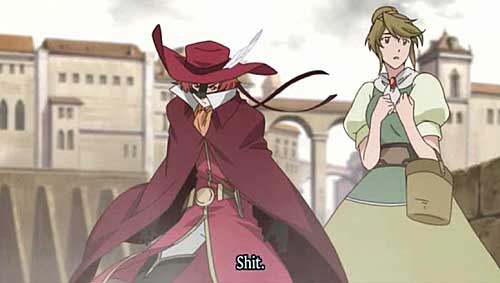 Romeo x Juliet may well be the most insane adaptation of Shakespeare ever made. I’d love to show this to an English literature class; it is so utterly wrong that anyone familiar with the play will be gasping for breath from laughing. I could list some of the more bizarre innovations and infelicities, but I don’t want to spoil anyone’s fun. Watch it and see if you can keep from snorting.

I probably won’t post much for the rest of the week. Barry the flutist, Richard the bodhran player and I will be celebrating Shakespeare’s Birthday with English country dances and other old tunes this Saturday, and I need to practice. If you’re in the Wichita area, you can hear us at the Delano Book Company at 811 W. Douglas between 11 a.m. and noon. 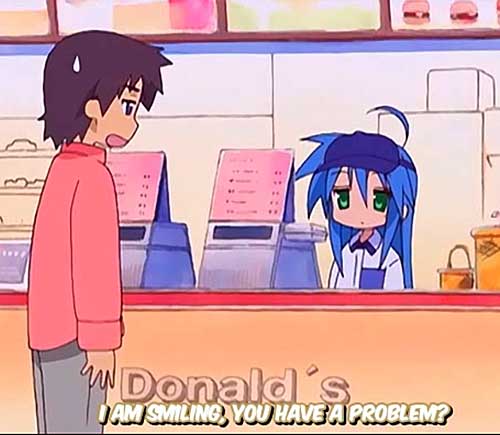 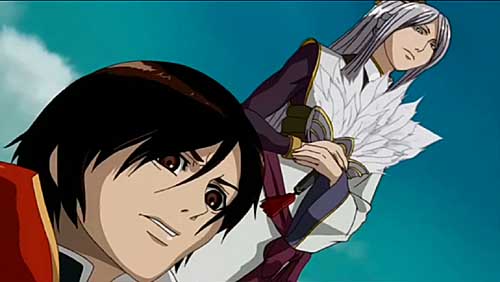 Amy Welborn surveys the Mainstream Media’s assessments of the German Shepherd on his eightieth birthday:

These journalists – and many of their sources – show absolutely no evidence of ever having read anything Benedict has written – whether we’re talking about his books as Joseph Ratzinger or, more criminally, the homilies he preached, you know, last week.

This constant refusal to just report on what the Pope says (unless it is a phrase containing the words “Iraq,” “abortion” or “politician”) is getting more than tiresome. How many journalists reporting on Benedict in the secular English-speaking mainstream media are even making an effort to listen to and understand Benedict on his own terms?

And from the comments:

The MSM are part of the demographic mix of elites that is now 2 generations detached from religious connectivity. The idea of a spiritual or interior life is alien to them. Itâ€™s not that Benedictâ€™s theological/philosophical reasoning is different than their own. They generally never reason about a theological or philosophical framework at all. Given that, they can only write about Benedict from a pedestrian context because thatâ€™s the only context in which they live. When the MSM reports on Benedict, think the depth of the Seinfeld characters without the laughs.

I discovered that there is already a weblog named Days of grass, days of straw. Therefore, I’m going to look for another name. I’ll be skimming through Lafferty, Gene Wolfe and Cordwainer Smith when I have time during the next few days to see what sounds right and hasn’t been taken. (There already is an Alpha Ralpha Boulevard, grrr.) In the meantime, this will be a weblog without a name. 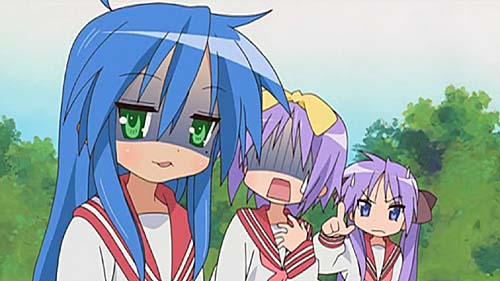 Let’s see if I can make a poll.

This is the successor to Mixolydian Mode. Expect more of the same, including the same slow tempo, for the next few months. After that, there may be some changes. Or maybe not.

I’ve got the main blogroll up. I’ll add additional links and other curiosities in coming weeks. I probably won’t be able to import the content from my old weblog, but I will see if I can at least copy all the midi files over to my new host before I cancel the old account. I spent a ridiculous amount time on them over the years, and I don’t want them to disappear without a trace.

Iin case you’re wondering, the titles of this weblog and this post are stolen from an R.A. Lafferty story. It’s included in the collection Ringing Changes, long out of print but worth tracking down.

Here’s a piece from one of my current favorite albums:

Here’s what you should see:

(I suppose I ought to say “Irrashaimase,” but I speak English.) This weblog is the successor to beware the kawaii, and I’ll continue to write about anime and related subjects here. When I’m more comfortable with WordPress I’ll play around with the formatting, but for now this theme (“Barthelme”) is satisfactory.

Update: I am informed that the first theme didn’t work on smaller monitors, so I changed to a narrower one.