Can’t afford to travel to Japan? Visit Tokyo virtually with this extremely detailed 150-gigapixel panorama photographed from the Tokyo Tower. To see it full-screen at full resolution (recommended), go here and click on the symbol with the four little arrows pointing out. 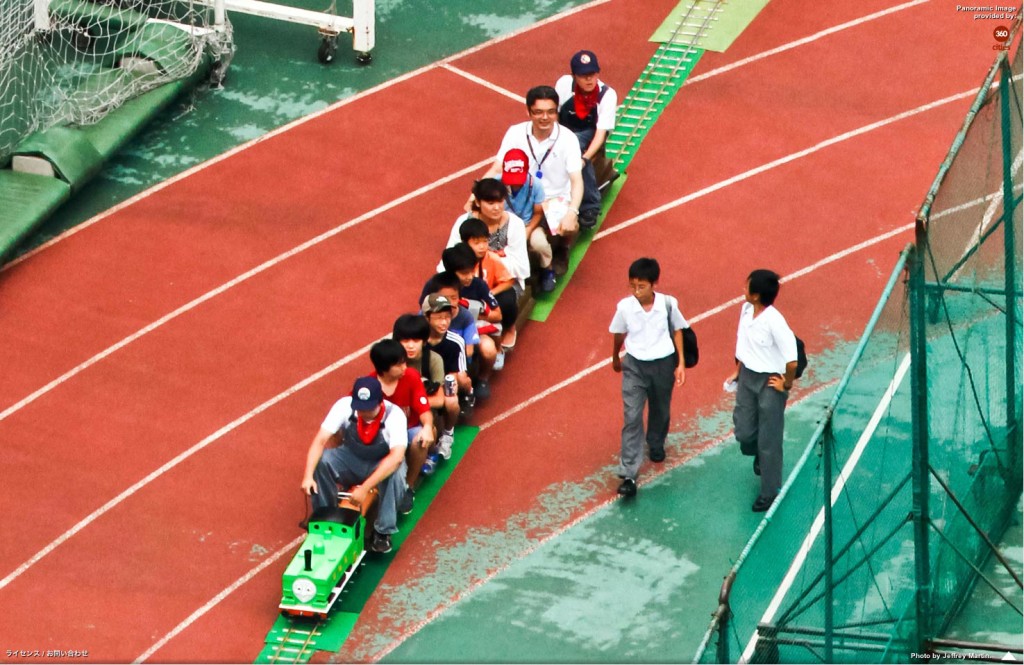 Tokachi has roused itself from its nap. Its eruptions are usually “mild-to-moderate,” and I’d be more concerned with what El Hierro is going to do next, but any erupting volcano presents dangers. There are pictures and videos here, ((Update: as far as I can tell from the Giggle translation, the pictures are from five years ago.)) and a webcam here (the fourth on the list).

At the southwest end of Japan on Kyushu, Sakurajima remains its usual explosive self. If your local authorities forbid fireworks Wednesday because of fire danger, you can always watch the show here and here (fifth from the bottom).

Update: Since I grabbed the screencap of Tokachi, I haven’t seen any incandescence in the webcam, and there might not be anything of significance going on, after all. It’s not mentioned in the Japan Meteorological Agency’s list of warnings. You might want to keep an eye on Popocatéptl, instead.

The Japanese volcano Kirishima has been making a spectacle of itself. The above is a movie I assembled from frame grabs from one of the webcams there collected by the commentor “Raving” at the Eruptions weblog. You can download the movie here (14 megabytes).

Kirishima, a volcano not far from Sakurajima on Kyushu, is currently putting on a show, complete with lava fountains. ((Or at least energetic jets of incandescent material.)) Here is a webcam with good view of the eruption. Here’s another (scroll down to the seventh item from the bottom in the list at right, “???”).

END_OF_DOCUMENT_TOKEN_TO_BE_REPLACED

How do you entice youngsters to visit places of worship? If you are the chief monk of a Japanese Buddhist temple, you embrace anime/manga culture, with anime-style statues of a Japanese deity, cosplaying temple maidens, J-pop tunes and videos, decorated vans and a maid café. Somehow, I don’t think this is likely to catch on in the Catholic Diocese of Wichita.

(Via Beneath the Tangles.)

Who are the Japanese — “… slightly modified Koreans“? The article is about 10 years old and the research may be outdated, but it’s an interesting read nevertheless.

Do you tweet? Are your thoughts expressible in no more than 140 characters? Perhaps you should reconsider. Here are a variety of philosophical arguments against using Twitter. For instance:

Natural Law Argument
(1) It is wrong to do what is not natural.
(2) There is nothing remotely natural about broadcasting the minutiae of your life to all and sundry whenever it takes your fancy.
(3) Therefore, Twittering is wrong.

A related concept is heiwa-boke (hei-WA boh-keh), literally meaning “numbed from too much peace,” which describes the state of literally being made stupid by living in a country that’s overly harmonious, like the Japanese who traveled to Iraq in 2004 to help rebuild the country only to be promptly kidnapped because, well, they were in friggin’ Iraq.

A piece on the Montreaux jazz festival included this note about an unlikely pairing:

The pair [Lang Lang and Herbie Hancock] ended with Franz Liszt’s Hungarian Rhapsody No. 2 — which Lang Lang says inspired him when he heard it in a Tom & Jerry cartoon at 2 years old.

Here’s that cartoon, a classic combination of music and violence. The pianist you hear is likely Shura Cherkassky.

END_OF_DOCUMENT_TOKEN_TO_BE_REPLACED

(Via Fear and Loathing in Georgetown.)

Via a friend: Sex and Flirting in Japan. (There are no pictures, so it’s almost safe for work.)

Lost in the anime zone with John Ringo.

They’re not anime, and I recall posting them on my earlier weblogs, but they’re worth revisiting: Scientific Truth in Warning Labels, and Cognitive Hazards and other modern warning signs. (Via TexasBestGrok.)

“Definitely time to write some AP/RIAA slashfic.” (Via René’s Apple.)

Bonus link: Gainaxing as a source of energy.

Special bonus link: The Costume Hall of Shame. (Via .clue.)

I’ve watched very little anime recently, mainly because I’ve been playing with my new toy. It’s as much computer as camera, and learning everything it’s capable of is a major project. (Not that it’s hard to use — put it on “auto” and it is a superior point-and-shoot.) I’ve been posting some of the pictures on my other weblog, starting with “90/365.”

The third episode of Sayonara Zetsubou Sensei doesn’t begin with an attempted suicide, which is a bad omen for this black-humored satire. This week’s flakes are a blonde with a dual personality and an illegal immigrant. Unfortunately, Itoshiki disappears in the last third of the show, and Kafuka doesn’t have the same chemistry with obsessive-compulsive Chiri as she does with Mr. Despair. While tasteless humor is to be expected in this sort of show, some of the gags cross the line, notably a brief allusion to pedophilia. Although SZS remains the least unfunny of the current comedies that I’ve seen (Oh! Edo Rocket is something more), I’m still underwhelmed. I watched it a second time, pausing to read all the graffiti on the blackboard, and it wasn’t worth the effort.

Otherwise, I’ve been rewatching Shingu. I’m half-way through and, once again, I’m in no hurry to finish it. I may make some time this week to get caught up with Denno Coil; four new episodes were posted in the last three days, after a three-week dry spell. I may also take a look at Mononoke.

A couple of weblogs that might be worth keeping track of:

FictionJunction J-music — Julien writes about and posts samples of anime soundtracks and other Japanese music.

Japanese words of anime fans … — Discussion of Japanese terms of interest to anime viewers. Many of the words I would prefer not to learn, but it is a potentially useful site nevertheless. (Via Wabi Sabi and Nick.)

Sailor Moon remains a constant menace. Usagi Tsukino and her cohorts currently pose two fresh threats. First, there is a “Sailor Moon” game in development for the Wii. Fortunately for the West, it will probably be region-restricted to Japan. And if that isn’t frightening enough, Usagi herself is poised to strike Japan as a major typhoon: 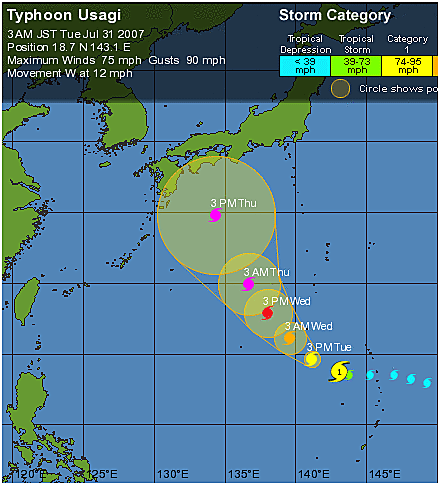 I hope Ken is packing an umbrella.