Anthony Sacramone thinks this is the funniest sketch ever performed, and perhaps it is. R.I.P., Sid Caesar.

A group of wealthy investors wanted to be able to predict the outcome of a horse race. So they hired a group of biologists, a group of statisticians, and a group of physicists. Each group was given a year to research the issue. After one year, the groups all reported to the investors. The biologists said that they could genetically engineer an unbeatable racehorse, but it would take 200 years and $100bn. The statisticians reported next. They said that they could predict the outcome of any race, at a cost of $100m per race, and they would only be right 10% of the time. Finally, the physicists reported that they could also predict the outcome of any race, and that their process was cheap and simple. The investors listened eagerly to this proposal. The head physicist reported, “We have made several simplifying assumptions: first, let each horse be a perfect rolling sphere… “

Update: How science is actually done, according to #overlyhonestmethods.

Our sampling locations happen to match tropical resort towns because field work doesn’t have to be mud and agony.

It is difficult to own things that don’t exist.

Avoiding people has its mental health benefits. ((I have verified this experimentally.))

Democracy would work a whole lot better if we weren’t so, you know, human. 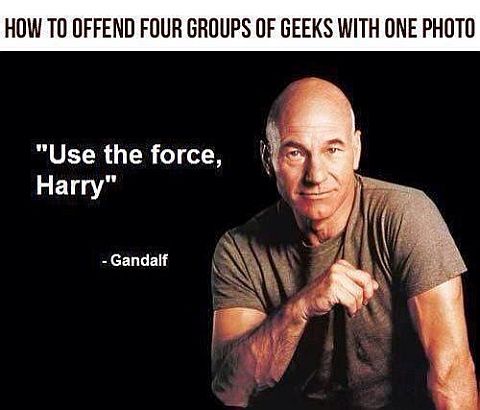 Life is busier than usual right now, and it will be a week or two before I have time for a proper post. Until then, here are a few odds and ends.

• The true and proper words to the traditional Christmas carol: 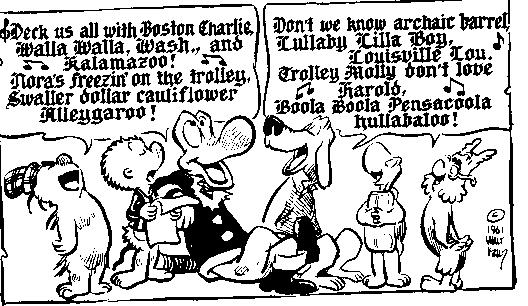 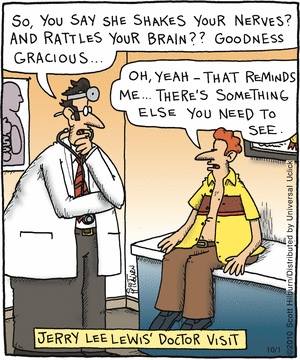 • If Kyousougiga ends well as well as it began, it likely will be the second-best show of 2013 (I don’t expect any current series to top the second half of Shin Sekai Yori). Here’s a tune from the OST that illustrates one aspect of the show. If Carl Stalling wrote anime music, it might sound something like this:

• Kill la Kill is currently in the middle of a tournament arc. Once that’s resolved, I expect that the show will shift gears, and then we’ll see just how good it really is.

• Arpeggio of Blue Steel, when it isn’t annoyingly silly, has been a surprisingly good series. Ubu has more to say about it. See Jusuchin for episode-by-episode discussions, with plentiful spoilers.

• Despite my better judgement, I’m still watching I couldn’t, so, etc. The creators can’t decide whether it’s a comedy, a fanservice vehicle, an action story or a romance; too often, it’s none of the above. Still, it’s just interesting enough that I want to see what happens. I wish Fino were in a better show with better writers.

History is satire, and histories that are simply serious are simply false.

END_OF_DOCUMENT_TOKEN_TO_BE_REPLACED

Nintendo games are hopelessly sexist and racist. Fortunately, the Diversity Chronicle is here to call them out:

Invariably in virtually all of these Mario games Mario rescues the princess. In other words the old sexist staple tale plays out. The weak, docile, insecure woman is captured and kidnapped. Unable to defend herself or rescue herself, she invariably waits for a man, in this case Mario. This is nothing but sexist gender-stereotyping for children.

My life-partner is a very resourceful woman. I would like to think that if she were ever kidnapped she could even rescue herself. She wouldn’t have to wait around for some man to do it! That’s not her style, she’s a strong, intelligent and independent woman! I would never try to demean the woman I love by attempting to rescue her. Nor would I dishonour her by asking violent racially-profiling reactionaries like the police to go out and try to find her!

The Zelda games are no better:

Zelda and Link are depicted as Nordic Aryans, albeit with dwarf like ears, reminiscent of something out of old Nordic Viking mythology. If Richard Wagner, that old Anti-Semitic Nordic supremacist had been alive today he would probably be creating video games like Zelda. In fact the latest Zelda game features music recorded from an actual orchestra. How many people of colour do you think there are in a typical orchestra? The conductors are invariably old white men, it never fails! Haven’t we had enough of this tired old white man music? Why can’t Nintendo adopt vibrant African or Rastafarian music? Maybe some Bob Marley?

Here are a few videos that recently caught my fancy.

There are no “gangnam” parodies because I’m sick of them. 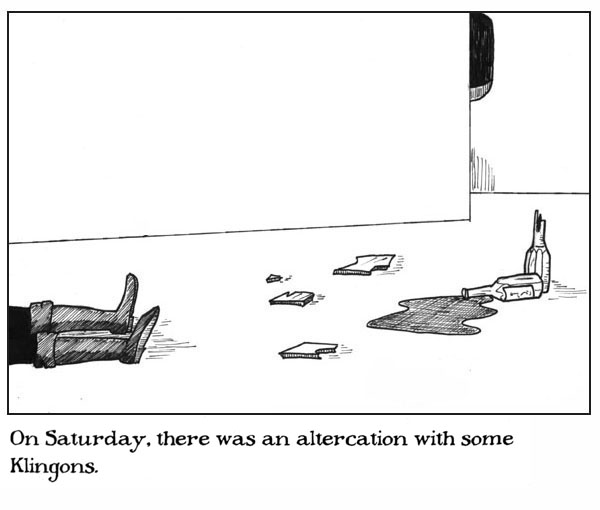 Pat Metheny on the Emperor of Elevator Music. (Via the professor.)

Interviewer: “What do expect is in store for the future of jazz guitar?”
Yogi: “I’m thinkin’ there’ll be a group of guys who’ve never met talkin’ about it all the time..”
Interviewer: Can you explain jazz?
Yogi: I can’t, but I will. 90% of all jazz is half improvisation. The other half is the part people play while others are playing something they never played with anyone who played that part. So if you play the wrong part, it’s right. If you play the right part, it might be right if you play it wrong enough. But if you play it too right, it’s wrong.
Interviewer: I don’t understand.
Yogi: Anyone who understands jazz knows that you can’t understand it. It’s too complicated. That’s what’s so simple about it.
Interviewer: Do you understand it?
Yogi: No. That’s why I can explain it. If I understood it, I wouldn’t know anything about it.
Interviewer: Are there any great jazz players alive today?
Yogi: No. All the great jazz players alive today are dead. Except for the ones that are still alive. But so many of them are dead, that the ones that are still alive are dying to be like the ones that are dead. Some would kill for it.
Interviewer: What is syncopation?
Yogi: That’s when the note that you should hear now happens either before or after you hear it. In jazz, you don’t hear notes when they happen because that would be some other type of music. Other types of music can be jazz, but only if they’re the same as something different from those other kinds.
Interviewer: Now I really don’t understand.
Yogi: I haven’t taught you enough for you to not understand jazz that well.

A few pictures from Anime Festival Wichita this evening:

END_OF_DOCUMENT_TOKEN_TO_BE_REPLACED

Update: If an image of a pink pony playing a trombone might “frighten, intimidate or cause emotional distress” to you, do not click here: 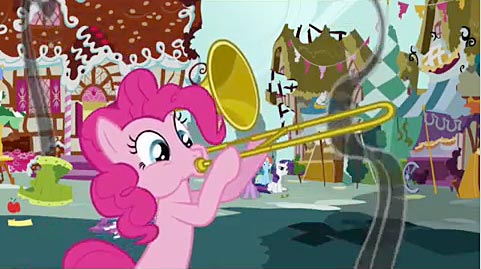 I note with alarm that a corner of the otakusphere has been invaded by aliens more frightening than zombies or sparkly vampires. These creatures look superficially equine, but their fur and manes typically are colors that do not naturally occur on mammals. Their behaviors sometimes suggest intelligible sentience, but just as often reflect either hypertrophied reflexes or psychoses. Thus far these creatures have been primarily an occidental phenomenon, but they recently have been observed in Japan. Here is some video footage of these entities. (Caution: sit at least 0.6096 meter from the computer monitor while watching this documentary. If you find yourself repeatedly viewing any of the videos posted or linked here, seek professional help immediately.)

I would recommend summoning superheroes to deal with this menace, but I fear that they have already been compromised. I suspect that our only hope is a new corps of mahou shoujo.

Kansas weather is sometimes a little too interesting for my taste. (The heat didn’t make it into the house, but the wind did wake me.)

Animation of a different sort: time-lapse photography of the beginning of the recent Grimsvötn eruption in Iceland:

(These are large files and might take a while to load.)

Although this might have been a larger eruption than Eyjafjallajokull’s last year, because of the prevailing winds and the composition of the ash, it was far less disruptive. Grimsvötn, incidentally, has a long and busy history, including the Lakagigar eruption of 1783, which was perhaps more consequential than Krakatau’s a century later.

Make sure you have brain bleach on hand before clicking “play.”

Condemned to be silly: the existential Star Wars.

(Via A Momentary Taste of Being.)

Fortunately, I’m not a Linux user.

And now for something perhaps a little less frightening: a friend of my brother has released a new tune. If you like loud music, give it a listen. It has more cowbell.

Not directly anime-related, but of interest to nerdy young fathers everywhere:

Here are some spooky videos for the weekend.

Animation by Sally Cruikshank, with music by Danny Elfman:

So you thought Hitchcock’s The Birds was scary? Try this bird-infested video:

Of course, there’s a sequel:

And a bit of high culture: one of the lesser-known Canterbury Tales.