Inevitably, ponies have appeared in Glie. 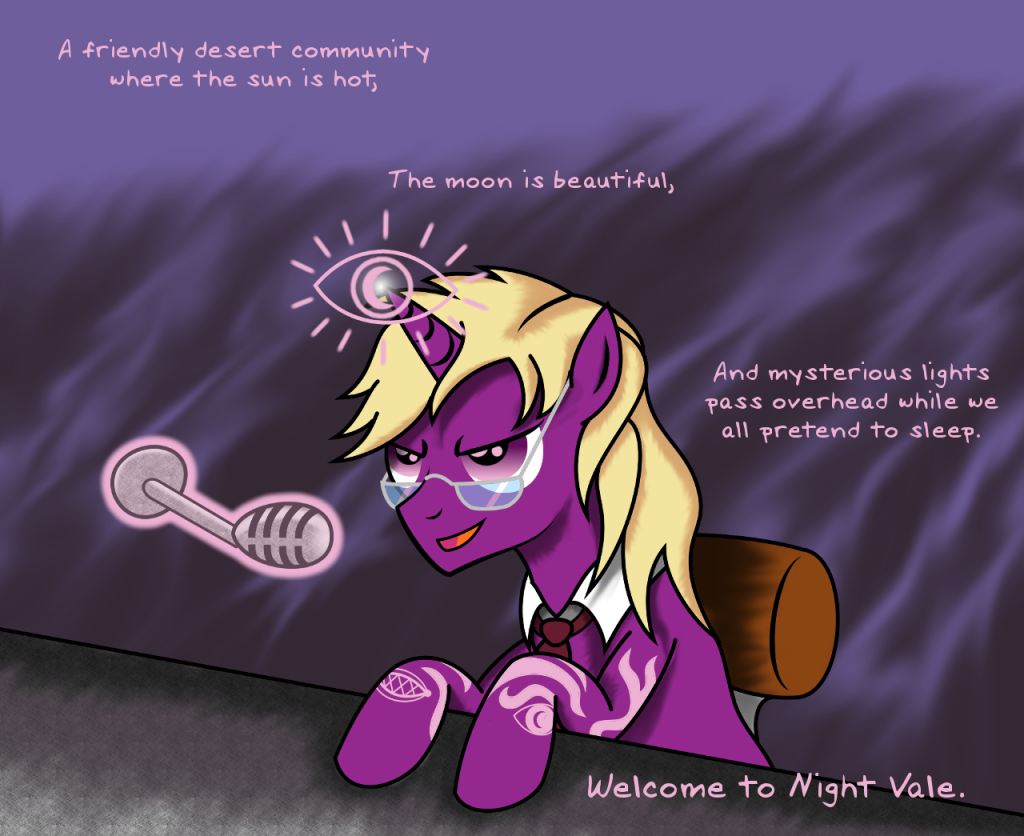 … in Night Vale. I looked around, but I couldn’t find any evidence of a Sailor Moon/Welcome to Night Vale crossover anywhere. However, there are ponies.

… and I could use a little silliness right now.

When I read Dusty Sage’s comments on Equestria Girls, it occurred to me that there might be another bipedal variation on the Pony theme extant. And indeed there is. Is there ever.

END_OF_DOCUMENT_TOKEN_TO_BE_REPLACED

The ponies got a shiny, bouncy new opening for their Japanese debut.

I can’t say that I’m enthusiastic about it, but it is more palatable than the original.

To clear the treacle out of your ear, here’s “My Little Baccano.” ((Here’s the original Baccano opening, in case anyone still hasn’t seen it.))

So the Japanese are going to get their own dub of My Little Pony ~Tomodachi wa Mahou~. Good for them; the first season, at least, (which is all I’ve seen) is often clever, rarely cloying, and probably better than nearly all other contemporary shows on western teevee.

Most of the actresses announced so far are new to me, but there are a few familiar voices. The Queen of Tears, Kikuko Inoue, is Princess Celestia. Fortunately, Celestia isn’t a weepy sort, and Inoue is a good actress when she isn’t bawling her eyes out. Rozen Maiden‘s Shinku is Twilight Sparkle, and Cardcaptor Sakura‘s Li Shaoran is Spike.

The surprise is the voice of the sweet, bashful Fluttershy: Emiri Kato. Kato earlier was the cute, cuddly and evil Kyubey. I have difficulty imagining Fluttershy with that voice. It’s the stuff of nightmares.

Dusty Sage found a “State of the Herd” survey of Bronies. One of the findings is astonishing if it’s accurate: more than a quarter of all MLP:FIM fans are INTJs like me. I knew that thoughtful introverts are far more common on the internet than offline, but this is bizarre. 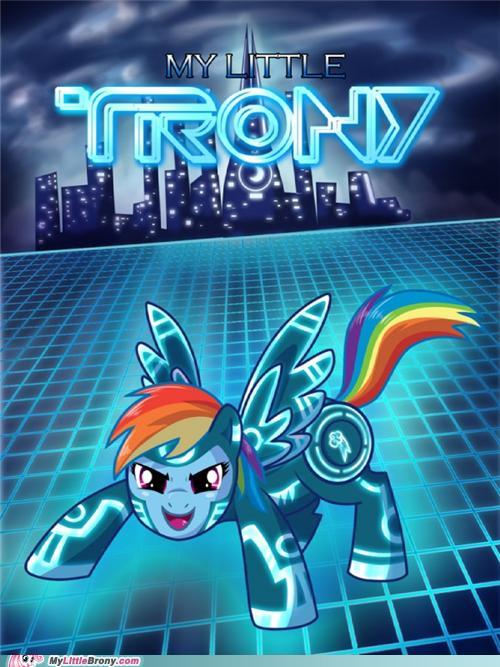 It’s been a few months since I last posted anything Pony-related, so here’s the inevitable crossover.

END_OF_DOCUMENT_TOKEN_TO_BE_REPLACED

(Here’s a side-by-side comparison with the CCS opening.)

Is the Brony universe the American counterpart of Touhou doujin culture? Perhaps. However, the main attraction of Touhou for me is the music, and I have yet to hear the MLP equivalent of “Lunatic Princess” or “U.N. Owen Was Her.”

I found time to watch the first two episodes of Mawaru Penguindrum, and, well, I’m not at all surprised that its mastermind was earlier responsible for Utena. It starts off as a shameless tearjerker. By the end of the second episode it’s deep in WTF territory. It’s currently getting high praise around the otakusphere, but I’m skeptical that it’s better than Madoka, as some claim. I suppose I’ll have to watch the rest of it and see.

For no good reason, I downloaded a curiosity called “Ravex in Tezuka World.” I should have bailed out when I saw this 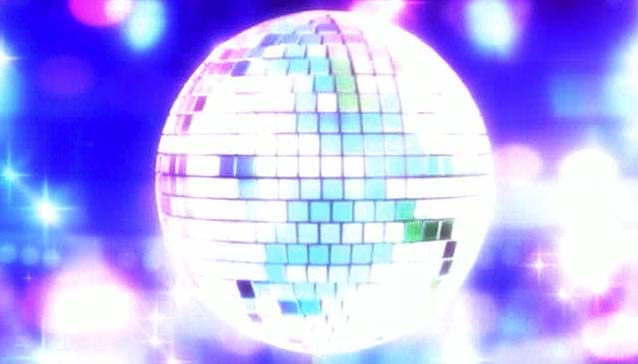 but I foolishly watched the whole thing. The planet of Reearth, whose denizens are escapees from Osamu Tezuka’s various works, is threatened by Dark Silence. However, the cheesy dance music of the Ravex trio saves the day, with some assistance from an altered Astroboy. 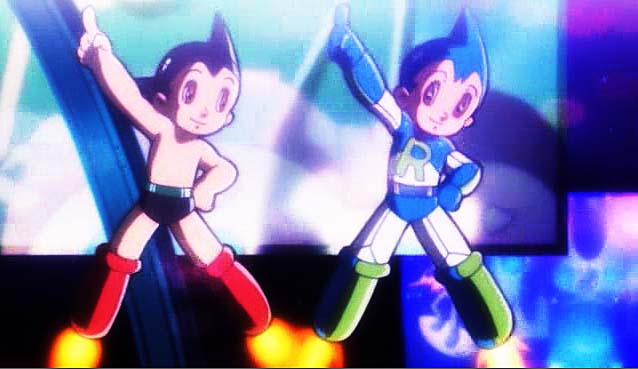 Not even Prince Princess Queen Sapphire can save this mess. 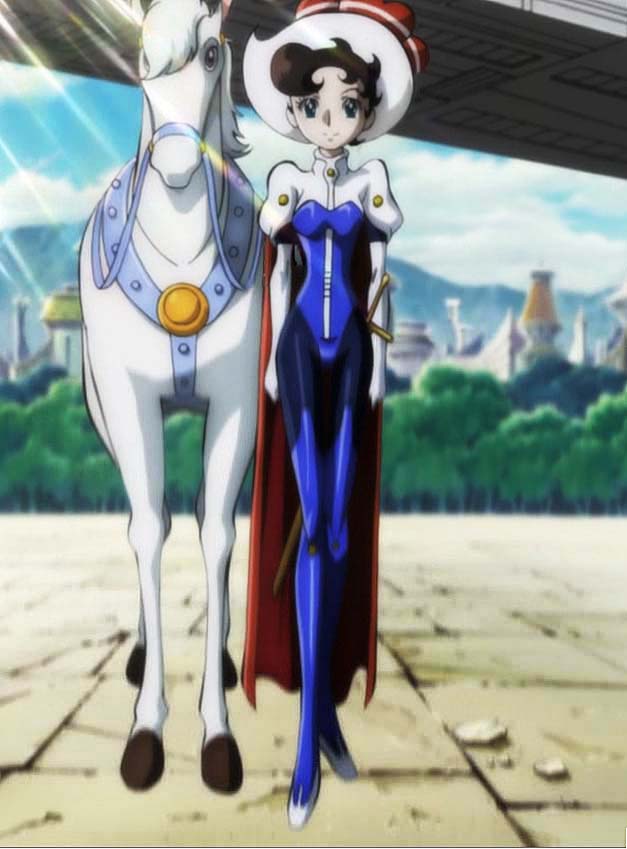 I used to write a lot about Japanese animation. I haven’t lately, partly because my obsessions vary with time, partly because I haven’t had opportunity to watch much of anything at all, animated or not. If nothing else goes wrong, ((While my luck isn’t Brickmuppet bad, the past 18 months have not been pleasant.)) there is a good chance that I will finally have my place back to myself again very soon, Then I will finally watch the rest of Dog Days and some more of Hyouge Mono, and see what else might be worth my time.

I don’t know if I will be able to afford maintaining an interest in anime, though. Katanagatari, a show high on my to-buy list, is offered in two Blue Ray/DVD “premium editions,” each containing half the series. These sets are available as “weekly specials” at RightStuf for $52 each. Katanagatari is good, but it’s not $100+ good. It wasn’t a Suzumiya Haruhi-level megahit, and I doubt that it will ever be released in an affordable DVD-only edition. Ditto Arakawa Under the Bridge, a series on my to-investigate list. Such prices seem to be what we can expect for most interesting series licensed during the next several years, until Blue Ray discs drive DVDs out entirely. When that happens, this might be what to expect. If so — well, good bye, anime.

In other anime news, Dennou Coil remains unlicensed in America.

Feline stroke of the week:

Gingrich, who would have made a marvelous Marxist …. 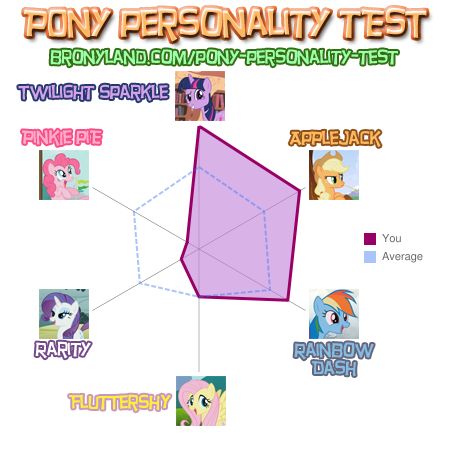 You can read the grim details and take the quiz yourself, if you dare, here.

Any of the contenders for the Republican presidential nomination would be preferable to the current resident of the White House. So would a golden retriever, most potted plants, or any warm glass of milk. The problem is picking one who can defeat Barry Oh! in November 2012. Our choices include unprepared amateurs, inarticulate debaters, damaged goods and Mitt Romney. Can any of them compete with recycled visions of unicorns and rainbows? I doubt it.

Instead, let’s fight the phantoms with the real things:

But Twilight Sparkle and Rainbow Dash aren’t American-born U.S. citizens, you object. Equestria is part of the Hasbro empire, headquartered in Rhode Island, USA; sure they’re Americans. But they’re too young, you say. With a slick lawyer and some expert testimony on “pony years,” that won’t be a problem. But there’s no puppy— So what? Twilight has a dragon assistant, and dragons are much cooler, and hotter, than puppies.

(I’m tempted to nominate Pinkie Pie for VP for the sake of the PP/Biden debates, but RD probably is the better candidate.)

I walked to work this morning, intending to photograph the fall colors. There was nothing worth recording, though — this fall looks to be the dullest ever, thanks to the miserably hot, dry summer — so, instead, here’s proof that manly men can be bronies.

For those wondering, I’ve been active for 5 years, and fly as a crew chief and rescue swimmer for the MH-60S. I can only wear the RD patch when I fly, but that’s because our squadron’s policy is it has to be military related when we’re walking around on base. That and most people assume a rainbow patch means “something else.”

From the aptly-named “Overthinking It,” an analysis of the political economy of My Little Pony: Friendship is Magic:

But the strong feminist themes of the series are built on a foundation of political contradictions. The most fantastic element of the show is not that ponies can talk or that dragons exist; it is the illusion that an egalitarian society can be maintained among groups with massive biologically inherent gaps in ability and economic utility. By even the most cursory of sociological and economic analyses, the society in MLP: FiM should be highly stratified along class and racial lines. And there are clear signs of that stratification, except they are obscured by a propagandistic focus on the power of “friendship”.

… Goldsmith describes a course he teaches entitled “Uncreative Writing.” In this course, “students are penalized for showing any shred of originality and creativity,” and rewarded for “plagiarism, identity theft, repurposing papers, patchwriting, sampling, plundering, and stealing.” The course also involves such misadventures as modifying Wikipedia pages by inserting additional spaces between words and holding classes within the online game Second Life. The final exam consists of purchasing a paper from a paper mill and presenting it to the class as one’s own, on the basis of answering the question, “Is it possible to defend something you didn’t write?”

I ain’t no damn academic and never will be, thank God.

“Gene, your writing style is very clear and concise. Very muscular. But it is not academic writing. It is popular writing. If you persist in writing clear prose, you will never get far in academic writing. Academic writing must be turgid and convoluted. You must force your reader to read your sentences four and five times before she can understand what you are trying to say. You must obscure the concepts that just anyone can understand. You must, as literally as possible, grab your reader by the throat and pull her face into the text, holding her captive until she can escape by understanding the essay in full after struggling and wrestling with your words.”

We grant that television is a tragic addiction, and we yield to no one in our sympathy for its unfortunate victims. But why must the rest of us be prisoners of other people’s filthy habits?
Join the Société des Bozars today and raise your standard against aesthetic pollution. Make a pledge to patronize only establishments with no visible television sets.

One bonus of joining is that you need never set foot in an airport concourse or a McDonald’s again.

Even disregarding the price, the sad fact is that the product delivered by the fansub groups via torrents is better than what we can buy. It’s more timely, and the quality is higher, and the resolution is better, and it’s more comprehensive.

I wish it weren’t so. I would rather buy than steal. But two years ago it reached the point where it didn’t feel like virtue to be honest. It felt like being a sucker.

Even as big as the anime market was in North America three years ago before everything fell apart, we were still being treated as second class citizens. Usually there was a delay of between 1 and 3 years before titles got released here, if they were. And what we got was 480p, which these days looks like a postage stamp to me. (Especially on my 1920*1080 computer display.)