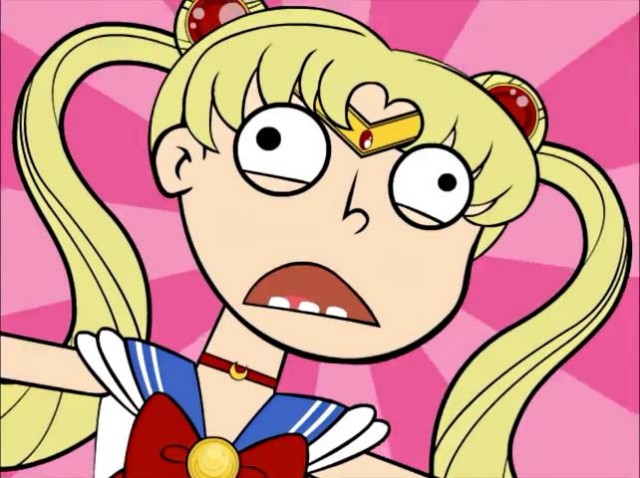 Recently about 250 animators, each with his own idiosyncratic style, redid an episode of the old English dub of Sailor Moon, each taking a few seconds. The result is, um, amazing. This is Sailor Moon as you’ve never seen her before: surrealistic, kaleidoscopic, bizarre and beyond bizarre. The screen caps here only hint at the stupefying variety of clashing styles in the complete episode. Even if you’re not a Sailor Moon fan, it’s worth watching just to see what contemporary animators are capable of.

END_OF_DOCUMENT_TOKEN_TO_BE_REPLACED

A few notes on The Return of the Revenge of the Son of the Bride of Sailor Moon, Fit the First:

• The opening theme for Sailor Moon is “Moonlight Densetsu.” Period. Anything else is wrong, particularly if it involves Momoiro Clover Z.

• Kotono Mitsuishi is Sailor Moon — that is, the Kotono Mitsuishi of 20 years ago. Now she’s in her mid-forties. She’s still one of the best voice actresses in the business, but you can hear the strain in her voice as she tries to sound like a fourteen-year-old

• The first episode of the rebooted anime follows what I remember of the original fairly closely. The differences are mostly improvements. Mamoru isn’t quite as insufferable as he was the first time, for instance, though he’s still a pompous twit.

• Usagi’s bawling has potential as an offensive weapon.

• The art looks vastly better than in the original anime. The character designs have been tweaked to follow the manga style more closely, which is a plus overall. Unfortuntely, it also tends to emphasize the bug-eyes. 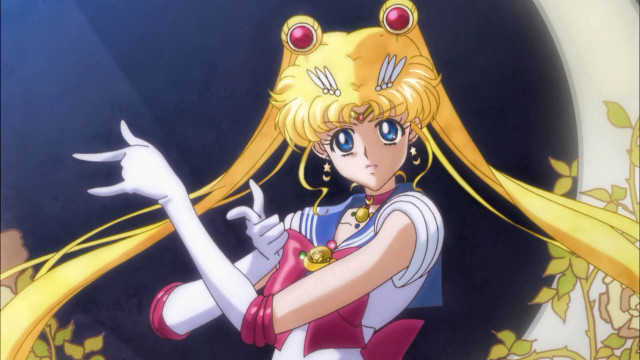 Should you watch it? If you are a Sailor Moon obsessive or are interested in mahou shoujo/sentai team hybrids, it’s worth sampling. Most other viewers will find it rather silly. I might watch more, or I might not. 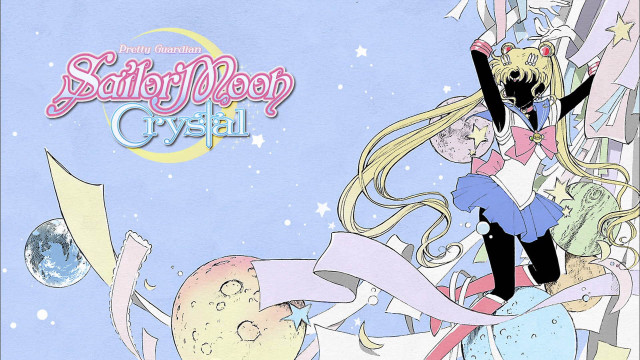 My minimum standard for singing is Hatsune Miku. If a vocalist can’t sing at least as well as software, he has no business near a microphone. Similarly, I can define a minimum standard for art: if an artist can’t paint or sculpt at least as well as Hozuki no Reitetsu‘s Nasube, he needs to master his craft before exhibiting his efforts. If his works are easily mistaken for trash by the cleaning staff, they’re not art. ((John C. Wright: “Go into a modern art museum and look at the trash on the walls. Bomb the museum. Go back through the wreckage and see if you or anyone can see any change.”))

END_OF_DOCUMENT_TOKEN_TO_BE_REPLACED

… and I could use a little silliness right now.

When I read Dusty Sage’s comments on Equestria Girls, it occurred to me that there might be another bipedal variation on the Pony theme extant. And indeed there is. Is there ever.

END_OF_DOCUMENT_TOKEN_TO_BE_REPLACED

Some years back I spent a lunch hour or two with City of Heroes. I was not terribly impressed. It was difficult to design an avatar that pleased my eye, and the game itself seemed to be just a lot of running around, blasting enemies and exchanging canned dialog with automatons. I lost interest before finishing the tutorial.

Although I didn’t find the game interesting, some writers of note did, notably Neil Gaiman and John C. Wright. From the latter I learned that the Korean company that owns City of Heroes is going to shut it down at the end of this month. Curious to see what Gaiman and Wright found in the game that I had missed, I gave it another try. 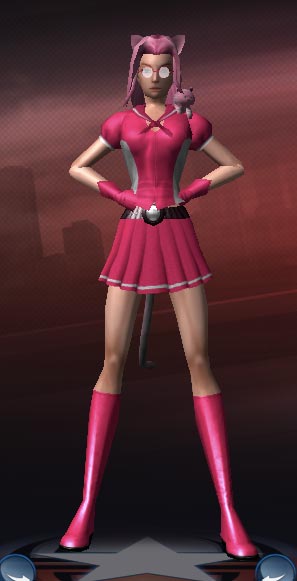 The game-play, frankly, is boring. It is still mostly just a lot of running (or flying) around, blasting enemies and exchanging canned dialogue with automatons. As Wright observes, the best part is creating your hero. As a non-paying member, I can only have two characters registered at a time, so I’ve created and deleted a number of avatars: the heavily-armored Carolus Ludovicus, slayer of Jabberwocks; MacCruiskeen, a plain Irish policeman whose toys make your brain hurt (Paragon City needs bicycles); the Mathematrix, a manager at Hilbert’s Hotel who strives to transform the world into a well-ordered set, by force if necessary.

My primary character, and the only one I’ve bothered to level up much, is The Remarkable Miss Sakura. (She became “remarkable” at level 12. I would have preferred an adjective such as “modest,” “unassuming,” or “polite,” but title choices are limited.) Originally a mahou shoujo, she eventually outgrew her frilly dress and retired from the magical girl business. She missed the excitement, though, and decided to make a place for herself as an occidental superheroine.

New characters advance rapidly for a while, and it is mildly addictive to acquire new powers every time you log on. Eventually your progress slows down, and leveling up becomes a grind of blasting gang members, abominations, robots, occultists and Chinese, ((I wonder if the real reason NCsoft is shutting City of Heroes down is that someone was offended by the villainous “Tsoo.”)) interspersed with frequent visits to hospitals. There is currently an alien invasion underway to spice things up, but it’s not enough to sustain my interest. I might log on once more on the last day, but I’m otherwise done with City of Heroes.

I may have missed an important part of the experience, though. There are many opportunities to form teams and many kinds of chat, but apparently I managed to pick the least popular servers to create my heroes on. More often than not, it seemed that I was the only player logged on. When I did receive team invitations, they were usually badly-timed, and the few occasions I was able to accept an invitation, the experiences were frustrating, sometimes for technical reasons, sometimes for human. Asocial though I am, I might have enjoyed City of Heroes better on a more populous server.

Which is why I’ll stick to Second Life for my MMO needs, even if City of Heroes gets a reprieve. It’s much easier to meet people from across the country and around the world, and there’s no RPG to get in the way. You can just find — or build — a congenial café where you can listen to music or play your own (it’s fairly easy to stream music from your computer into Second Life) and chat with friends.

Superheroics of a different sort: Here’s a rather odd-looking Sailor Senshi. 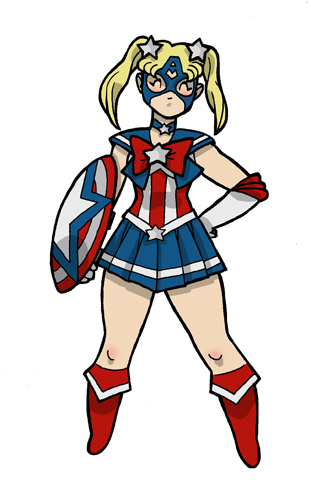 Her colleagues can be seen here. There’a a different set of Sailor Avengers here.

This was sent to me by a malefactor whom I won’t identify (his name sounds something like “sick puppet”).

Who would the outer senshi be? Haruka and Michiru are a little too obvious, but whom would you pick for Hotaru and Setsuna? Also, is there any guy as dorky as Mamoru, or any girl as annoying as ChibiUsa?

Update for those who have not endured watched Sailor Moon: the pirates and their sailor senshi counterparts have very little in common. Gruier’s hair deliberately imitates Usagi’s, but she is nothing like the stereotypical blonde that Sailor Moon is. Chiaki and Rei are probably the best match: both are black-haired and short-tempered and sometimes wear miko outfits. In each pair, the pirate is the more interesting character.

Still, Sailor Moon is the gold standard for mahou shoujo costumes. I’m always pleased to see pretty girls so attired, even though this is otherwise a crossover that shouldn’t happen.

Several otherwise sane and sensible people recently have been posting their Champions Online or City of Heroes characters. I thought I’d check the games out. Fortunately for me, the former is Windows-only, but the latter does have a Mac client and a free trial period, so that’s how I spent a couple of lunch hours this past week. (Actually, I spent the first lunch twiddling my thumbs while the client downloaded nearly three gigabytes of additional content — if I had realized that it would do that, I wouldn’t have bothered.) It is fun to play with the character creator; you can make a (rather skanky-looking) schoolgirl, which isn’t possible with such sites as Hero Machine. The game itself, though, looks as dull as every other MMORPG I’ve visited, as far as I could judge from the tutorials (I tried both the heroic and villainous options). It’s nifty to design colorful avatars, but “jogging heroically” to fight random enemies is tedious. I’d rather listen to music —

— which is what I do in Second Life. My initial impressions of SL were rather negative, and if you want to find intelligent people to discuss anime with, you’ll do better hanging around Steven’s place. But there is lots of music there, some of it good, and there are other people with tastes as wide-ranging as mine. It’s possible to stream music from your computer to sites within Second Life, which I’ll be doing Saturday evenings for while. If you have a SL account, stop by Grizzy’s Café between 6 and 8 p.m. SL time (i.e., California time; between 8 and 10 p.m. in the central USA time zone). Tonight I’ll be playing very miscellaneous Japanese music, from Yoko Kanno to Hatsune Miku.

I’ve sampled some random examples from the fall anime season. So far I haven’t finished a single episode. Surprisingly, the one I watched longest was Kämpfer, this season’s attempt to create the ultimate anime. Let’s see … we have

• sexual ambiguity (question of definition: is a guy who actually changes to a girl truly a “trap”?)

I hesitate to say whether there are any moeblobs or tsunderes in the show. I think one character qualifies on both counts, but that isn’t my field of expertise.

That’s in just the first fifteen minutes or so. There are also hints of a developing harem, a ridiculously powerful student government and perhaps a vast conspiracy. I expect future episodes will include copious steam. There are unlikely to be nekomimi, mecha or winged people, but I wouldn’t put it past the writers — it really is a silly show. Sad girls in snow are probably too much to hope for.

My only hope for the fall season is Kuuchuu Buranko, or Trapeze, whose crew includes Kenji Nakamura and Manabu Ishikawa of Mononoke.

A couple of odd links:

Some crossovers are best left unrealized.

More here, if you dare.

How to be even cuter. These won’t work unless you’re already fairly cute — visualize how Hillary Clinton would look trying these poses.

That other dealer is holding a “bargain bin blowout.” It’s mostly junk, of course, but there are complete sets of some worthy anime available for very reasonable prices, including Bottle Fairy, Divergence Eve and Misaki Chronicles, Haibane Renmei, Serial Experiments Lain, Shingu (including a t-shirt), Someday’s Dreamers and Sugar, a Tiny Snow Fairy. There’s also some Miles Davis.

So Sailor Moon is girl stuff? Check the results of this poll.

I had intended to write a detailed comparison of the print and anime versions of Moribito, but I doubt that I will get around to it any time soon, and I’ve loaned the book to friends. Here are some highlights from the post I’m not writing:

END_OF_DOCUMENT_TOKEN_TO_BE_REPLACED

Sailor Moon has her own orchid, a distinction she shares with Dracula and Kim Il Sung. (Kim Yong Il has to make do with a begonia.)