It is Ms. Rowlingâ€™s achievement in this series that she manages to make Harry both a familiar adolescent â€” coping with the banal frustrations of school and dating â€” and an epic hero, kin to everyone from the young King Arthur to Spider-Man and Luke Skywalker. This same magpie talent has enabled her to create a narrative that effortlessly mixes up allusions to Homer, Milton, Shakespeare and Kafka, with silly kid jokes about vomit-flavored candies, a narrative that fuses a plethora of genres (from the boarding-school novel to the detective story to the epic quest) into a story that could be Exhibit A in a Joseph Campbell survey of mythic archetypes.

In doing so, J. K. Rowling has created a world as fully detailed as L. Frank Baumâ€™s Oz or J. R. R. Tolkienâ€™s Middle Earth, a world so minutely imagined in terms of its history and rituals and rules that it qualifies as an alternate universe, which may be one reason the â€œPotterâ€ books have spawned such a passionate following and such fervent exegesis. With this volume, the reader realizes that small incidents and asides in earlier installments (hidden among a huge number of red herrings) create a breadcrumb trail of clues to the plot, that Ms. Rowling has fitted together the jigsaw-puzzle pieces of this long undertaking with Dickensian ingenuity and ardor.

Postscript: Although Kakutani is careful to avoid spoilers, her comments do imply an answer to one of the major questions in the series: does Harry ultimately survive? If you’re planning to read the book soon anyway, you might want to skip this (and other) reviews.

(Via Galley Slaves and Ross Douthat.)

Now that I have some distance, it occurs to me that Transformers is actually important in that it does something that’s never been done before–it is not just critic-proof, it is judgment proof. Michael Bay has created a work which simply cannot be held to any sort of standard: artistic, logical, moral, critical. He has made a movie which simply is. This is the Holy Grail of modern moviemaking, I think. It’s Hollywood’s version of a perpetual motion machine.

Last spring, Gilles de Robien, France’s Education Minister, declared that schools in suburban Paris would teach more grammar and vocabulary to integrate immigrants and prevent future riots. The British Minister of State for Schools, Jim Knight, immediately called this Frenchie rot. He insisted that grammar and vocabulary are elitist, and therefore are what cause youth riots.

Scintillate, scintillate, globule vivivic
Would I could fathom thy matter specific
Lustily proud in the ether capacious
Strongly resembling a gem carbonaceous.

(Via a pretentious windbag.)

An old Salon article on Gorey. 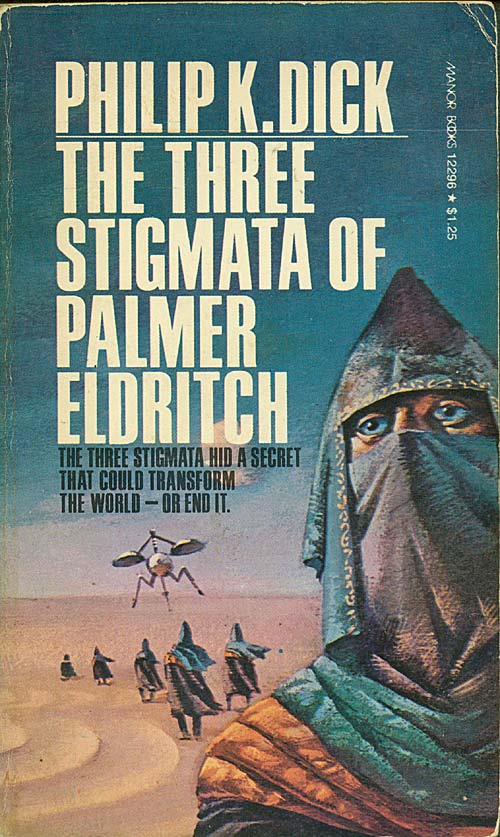 It could use more bookshelves, and it may offend purists by not actually being a hole in the ground, but otherwise it looks quite habitable.

The first Philip K. Dick book I ever bought. I now have more titles by Dick on my shelves than by any other writer.

It’s Philip K. Dick week. Four of his novels are being reissued by the Library of America: The Man in the High Castle, The Three Stigmata of Palmer Eldritch, Ubik and Do Androids Dream of Electric Sheep? It’s about time. The Man in the High Castle is an obvious choice: it’s possibly his best, and it’s one of his more approachable titles for non-SF readers. ((Eve Tushnet comments on the The Man in the High Castle here (scroll down to February 4, 2006).)) The Three Stigmata of Palmer Eldritch is also outstanding. Ubik, however, is a mess. It should have been Dick’s masterpiece, but the first seventy or so pages are so painfully bad that I can’t recommend it. Do Androids Dream of Electric Sheep? is included, I suspect, because a popular movie that I hated was based loosely â€” very loosely â€” on it. Instead of the latter two novels, I would have suggested Martian Timeslip and a selection of his short stories.

The new edition provided the occasion for Charles McGrath to write an account of Dick, emphasizing Dick’s mental instability, amphetamine use and “pulpish sensibility.”

In the current issue of Commonweal, John Garvey writes a much more detailed and sympathetic appreciation of Dick’s work, focusing on the gnosticism of this most peculiar Episcopalian convert. (It’s not available online unless you have a subscription.) He comes much closer than McGrath as to why Dick is worth reading:

In these and his other stories, Dick creates characters struggle who not only for salvation, for ultimate truths, but sometimes merely to be decent human beings â€” and the two struggles are really one. What reality is and what it means to be authentically human are intrinsically linked. Dick’s answers, such as the are, range randomly from new-age nonsense, through his own episodes of delusion and paranoia, to a Gnostic Christianity that contains more of the pain and compassion of real Christianity than most Gnostic visions. Many Gnostic writings advance an elitism that delights in being among the chosen in who the divine light resides. Dick saw glimmers of the shattered divine light in many confused and struggling people, and he found something of cosmic significance there, both in the light and in the struggle.

A lot of movies have been made from Dick’s stories. I’ve only seen Blade Runner, which I loathed â€” I had read the book, which the movie betrayed. I may watch A Scanner Darkly someday, but I expect that it will also disappoint me. I gather that the dramatic works that best evoke Dick’s spirit are not directly based on his work, e.g., The Matrix (which I haven’t seen) and Serial Experiments Lain. Satoshi Kon’s new movie, Paprika, has been described as the collision of Hello Kitty and Philip K. Dick.