Highlights from the posts I don’t have time to write:

• Taishou Yakyuu Musume is the first new show this year to sustain my interest beyond the second episode. In the first eight episodes of the story, the writers have kept the focus primarily on high school girls learning to play baseball in 1925 Japan, and they have not let the themes of feminism and westernization versus traditionalism overburden the story. There’s also been very little teen angst. ((Some of the girls waste time being moody and depressed in early episodes; part of the story is how they find the mental toughness to keep playing despite errors and losses. However, there hasn’t been any romangst — yet. (In the eighth episode, it turns out that one of the girls has an unlikely crush on the central character. If this gets played up in the remaining episodes, it will be seriously annoying.) )) If the last four episodes are on the same level as the first six (the seventh and eight episodes are essentially filler), the series might be worth recommending.

Taking the maxim that “the pitcher and catcher should be as close as husband and wife” too literally.

• Ponyo is in its fifth week in Wichita, the longest any Miyazaki film has ever played here, and it’s at a theatre within reasonable bicycle distance. I watched it last weekend. The dub is tolerable, though “bug off” is not an adequate substitute for “baka.” It made a little more sense than the fansub I watched last year — I suspect that there was some discreet re-writing in the dub script — but the logic of the story still is, um, hard to follow. I’d rank Ponyo as second-tier Miyazaki, not a classic like Spirited Away or Totoro, but far better than Howl’s Moving Castle (skip the movie and read the book instead). It is well worth seeing on a large screen if you have the opportunity, particularly if you have kids.

• For the convenience of any balletomanes visiting here, this is the only section of choreographic interest in Hakucho no Mizumi, the 1981 animated version of Swan Lake.

Sorry — if you want 32 fouettés, you’re out of luck. Swan Lake does have one of the better stories in ballet, but this adaptation trivializes it. Skip it, and find a video of a good dance production instead. Or, better yet, attend a live performance when you have the opportunity.

The 1985 OVA Leda — The Fantastic Adventure of Yohko, which Steven recently discovered, looked like fun, so I downloaded it. ((According to ANN, it was once licensed by The Right Stuf International, but I found no sign of it on the RightStuf website.)) The story is straightforward anime fantasy: a high school girl is mysteriously transported to an strange world, where she transforms into a warrior in a battle bikini. Screen captures are below the fold.

It’s silly, but it’s not cheesy. The art is detailed, and the animation looks smooth to my non-expert eyes. Although there are characters named “Lingam” (spelled “Ringhum” in the subtitles) and “Yoni” and the girls don’t wear a lot of clothes, there is actually very little that’s off-color. It’s probably tolerable for all but the youngest audiences. If you have any interest in old-school anime, it’s worth checking out.

Update: Here are two sets of six consecutive frames. Each of these whizzes by in a fifth of a second.

END_OF_DOCUMENT_TOKEN_TO_BE_REPLACED

Here are some curious items from the most recent batch of search terms:

There were a few that make me glad that I am unlikely ever to meet the searchers:

Anime cosplayers are normal, sane people — at least compared to these.

Via Steven, who recently discovered Pokémon. (Update: note the third-place item in this list.)

Ubu, meanwhile, has discovered RahXephon. In a comment at Ubu’s place, Avatar confirms what I had suspected:

RahXephon was a show where we constructed a couple of really elaborate theories that explained everything, wrote off to Japan with a “so which one is it, we need to know for the translation”, and got back “huh? We did all those things because they looked cool.”

I really wonder sometimes: do Japanese boys want to be girls? If you think I’m exaggering, count the thumbnails on this graphic:

The first El Hazard OVA was written by Ryoe Tsukimura. He also wrote the scripts for the first Tenchi Muyo! movie and the many UFO Princess Valkyries. They have their moments, but they’re all essentially anime junk food. Most of the rest of Tsukimura’s output looks similarly undistinguished. However, he does have one classic to his credit, Noir, which was his idea and his script. In this, he reminds me of Kou Ohtani, a competent, unmemorable soundtrack composer who on one occasion exhibited afflatus.

Since I closed nominations for the current poll, commenters have mentioned Ghost in the Shell, Tenchi Muyo GXP, Kimagure Orange Road, Spice and Wolf and Wolf’s Rain. The first has been mentioned twice (the second time in an email), so I’ll probably add it to the second round candidates. Would anyone care to second any of the other series?

So you know fifth position. Very good. However, if your dancers are to do convincing pirouettes, they need to spot.

About Piggyback Rideback: if there is more ballet, I might follow it. However, if it’s just politics and mecha, forget it.

The tenth episode of Macademi Wasshoi is more of the same, with the students and faculty of the magical academy running amok while rescuing Takuto and the girls from a trio of formidable bandits. Then, about twenty-minutes into the episode, it suddenly gets very serious, and Anyone Can Die. The eleventh episode continues in the same grim vein, and there’s another death (or two, depending on how you count). It soon turns out that they’re Not Quite Dead, but now the story veers off in another unfunny direction, borrowing a motif from the final episode of Petite Princess Yucie and the forty-sixth episode of Cardcaptor Sakura. Hitherto, Macademi Wasshoi was a farce with occasional thoughtful moments. Now it’s a drama, with Sakuma and the girls as annoying comic relief.

The episode ends happily with a restoration of the status quo, but the fun has leaked out. The final episode, in which the girls try to get a Christmas present for Takuto, might have been enjoyable earlier in the series, but following the eleventh episode, it seems off-key.

So, do I recommend Macademi Wasshoi? Yes, with reservations. It’s funny and inventive overall, but it’s also frequently off-color with abundant fanservice. If it sounds like something you would like, I recommend watching the tenth and eleventh episodes last.

Update: Steven liked the eleventh episode a lot. There is a lot going on there and a lot more that’s hinted at, as Steven points out, but the shifts in tone are too jarring for me.

Those of you who are waiting impatiently for the next episodes of Macademi Wasshoi, cheer up. The translation is proceeding quite briskly in comparison to that of Master of Epic. The seventh episode of the latter has finally been fansubbed, nine months after the sixth.

Was it worth the wait? Not really. The first half showcases Tomoko Kaneda as an incompetent, thoughtless RPG character. Her performance almost redeems the lackluster writing — imagine Chiyo-chan’s hyperactive idiot twin sister in a dungeon crawl. The second half continues the Waragecha Five’s battles with the producer’s giant robots. It’s not that bad, but it’s not all that good, either. The previews for the eighth episode promise the conclusion to the robot story. That should be available around September, 2009. In the ninth episode, due out in late 2010 or early 2011, we perhaps can look forward to the return of the Waragecha Five to proper fantasy. 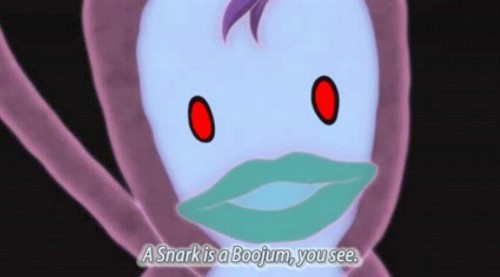 These past ten days or so I’ve spent most of my spare time digitizing old vinyl. ((Once you get a CD player, getting up every twenty minutes to turn an LP over seems unreasonably laborious. Even though I have one of the larger vinyl collections that I know of, I don’t often listen to records anymore.)) It’s been productive: I’ve got over ten CDs’ worth of newly-convenient music to listen to. I have a few more LPs I want to get into the computer before I move on to the next project. Watching videos is not high-priority right now.

Nevertheless, I have watched some anime — not a lot, but some. Here are a few very brief notes.

Ponyo on the Cliff by the Sea — discussed below.

… and #6 — More watchable than #5, but the show is still not back on track. I hope we don’t have another Kamichu! here, a wildly erratic series that starts strongly but goes nowhere.

Ghost Hound through #12 — My lunchtime project. With Ryutaro Nakamura and Chiaki J. Konaka involved, it ought to be good, but the plodding pace is frustrating. The eventual payoff had better be outstanding. My impression of the series the first time I tried watching it was that it was a taut twelve-episode show padded out to a draggy twenty-two, and I still think so.

Natsume Yuujinchou through #4 — A show from the summer that got relatively little attention in the otakusphere while it was airing. Another example of Shinto 101, it reminds me strongly of Mokke, both in its subject matter and in its tone. It occasionally gets dangerously sentimental, but it probably is one of the better series of the year.

I may write more about these later. Or maybe not.