Last year’s seedlings are approaching their first anniversary. I’m gradually potting them up individually, which will take a few weeks.

END_OF_DOCUMENT_TOKEN_TO_BE_REPLACED 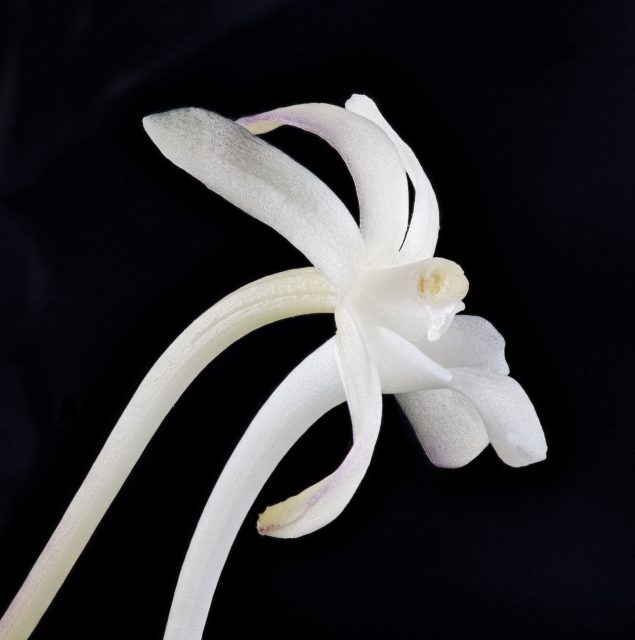 The Neofinetia falcata (or Vanda falcata) that I got back in November survived my inept care and is now in bloom. It’s a small plant, almost a miniature. The blossoms are about five-eighths of an inch across, and the length, including the spur, about an inch-and-a-half. This, I gather, is on the small side; an inch across and two-and-a-half long is more typical, according to what I’ve read. At night the flowers smell like vanilla with a slight hint of lemon.

I’ve mentioned before that the Japanese obsessed over these little epiphytes.1 Cacti, which would have been unknown in Japan until the later 19th century, turn up in everything from Martian Successor Nadesico to Elf Princess Rane, so there ought to be an occasional Neofinetia here and there in animated shows. But, as far as I know, there isn’t. Perhaps there’s one in the later episodes of Hyouge Mono, which I never finished, but probably not. I can’t think of any shows featuring orchidaceae. 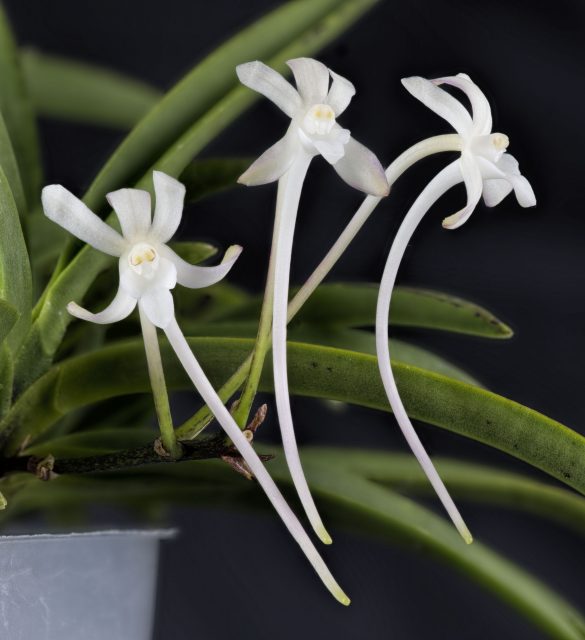 I spent last Sunday afternoon at Southwestern College in Winfield, where there are a couple of humid greenhouses filled with orchids. Above is a panorama from inside the smaller greenhouse. It’s the largest panorama I’ve made yet, assembled from 37 individual pictures: 29,186 x 14,593 pixels, which works out to more than 400 megapixels. You can read the labels in the pots if you zoom in. It’s best viewed in full-screen mode.

If that doesn’t work for you, try the lower-resolution Flickr version below. (Panoramas in Flickr don’t work well in Safari, unfortunately.)

I also took some conventional photos in the other greenhouse, which you can see here. I wasn’t able to take as many pictures as I had hoped, unfortunately. There was the inevitable society business meeting, which wasted half an hour. That was followed by a slide show, which wasted the remainder of my time there. Why would I want to look at pictures of orchids when I can see the real thing the next building over? Grrr. 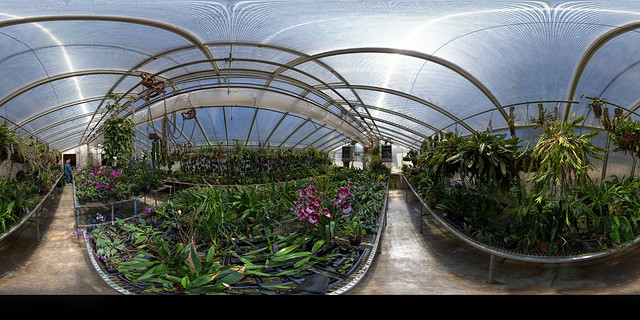 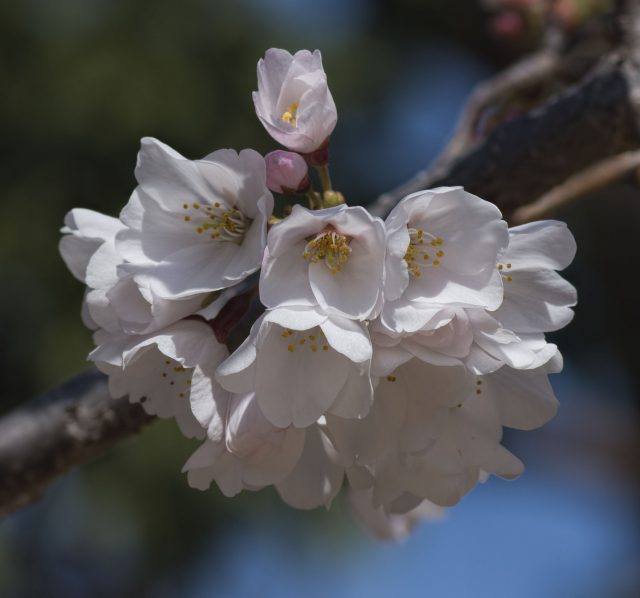 The Yoshino cherry is coming into bloom now at the botanical garden. Unlike the crypto-British Okame cherry I photographed earlier, this one is a genuinely Japanese variety. (Click to embiggen and see with better color.)

Other colors on display include red-orange, 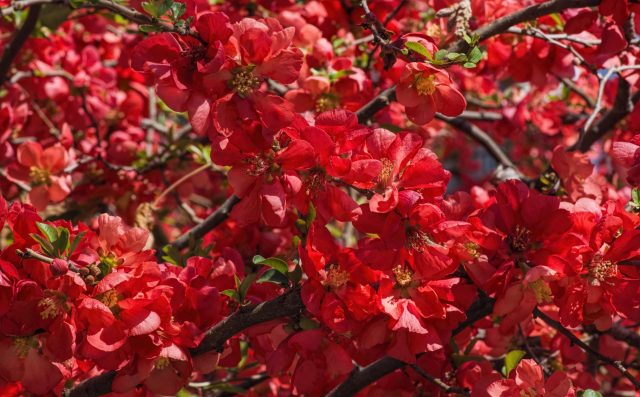 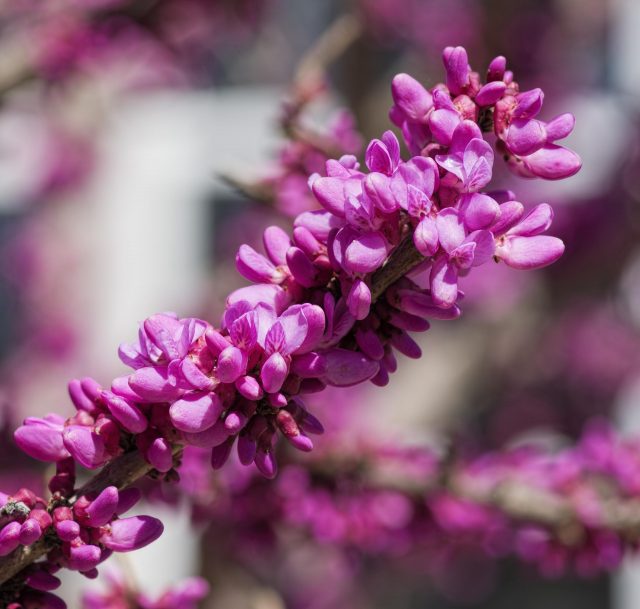 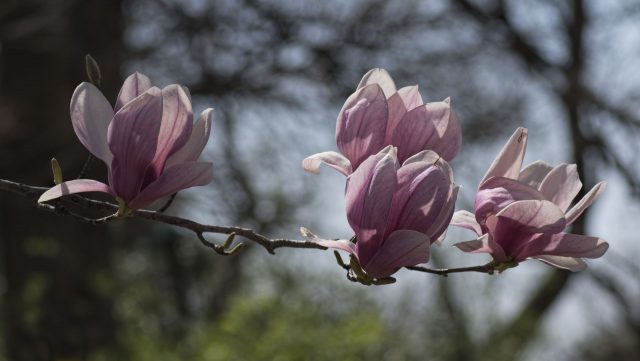 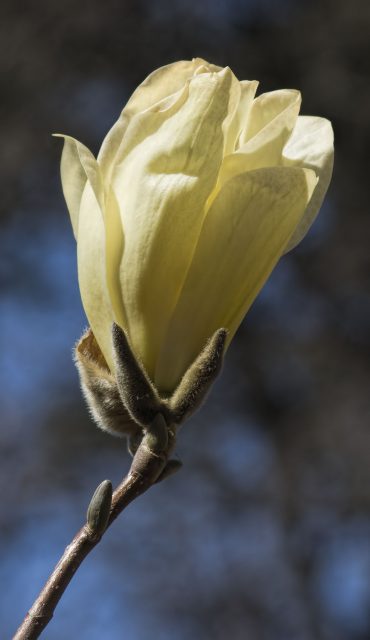 There are many more pictures from yesterday’s outing here. 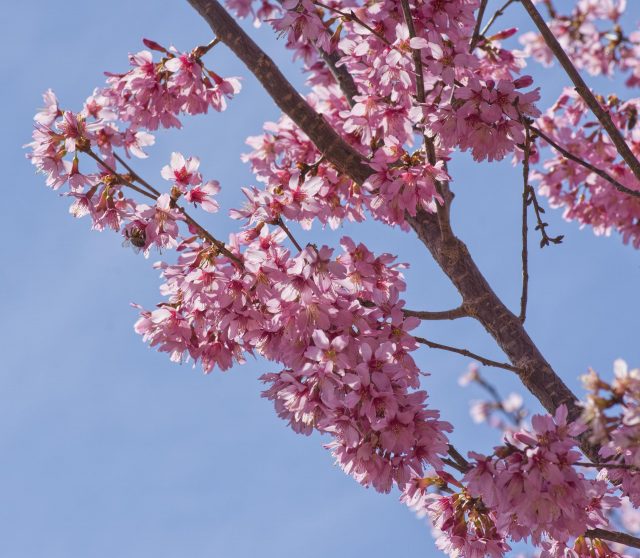 Yesterday, the Okame cherry at the botanical garden reached peak bloom on a sunny day with light wind, and I was able to visit there then. Most years this doesn’t happen, so I took a lot of pictures to record the event. There are more here. As usual, click to embiggen and view with better color.

Curious fact: although Prunus “Okame” is a hybrid of asian cherries and has a Japanese-sounding name, it was actually bred in England. 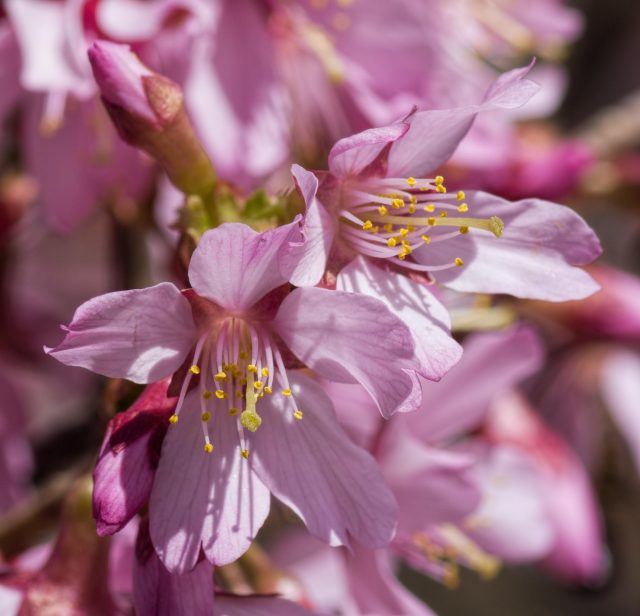 This orchid was already in bloom when I got it back at the beginning of November, and it kept going and going. Every single blossom lasted at least two months. We’ll see if I can get it to bloom again in the fall. (The other Phalaenopsis, the little P. equestris, is still going strong, and it looks like there is a new bloom spike emerging.) (Update (April 14): The last blossom finally dropped off yesterday.) 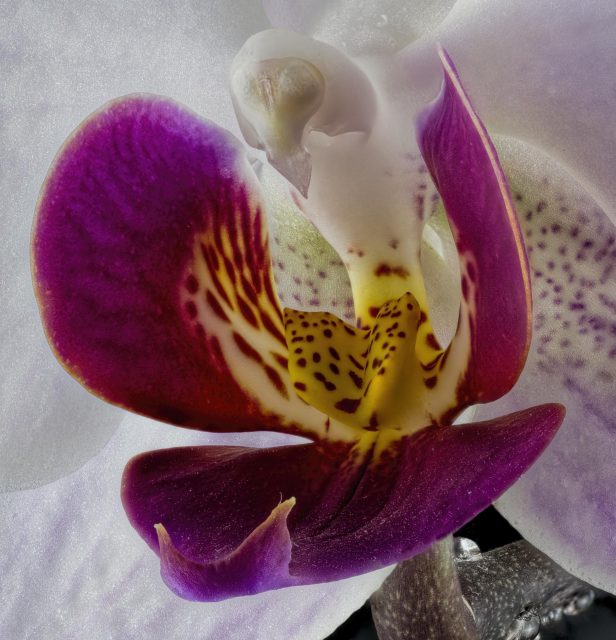 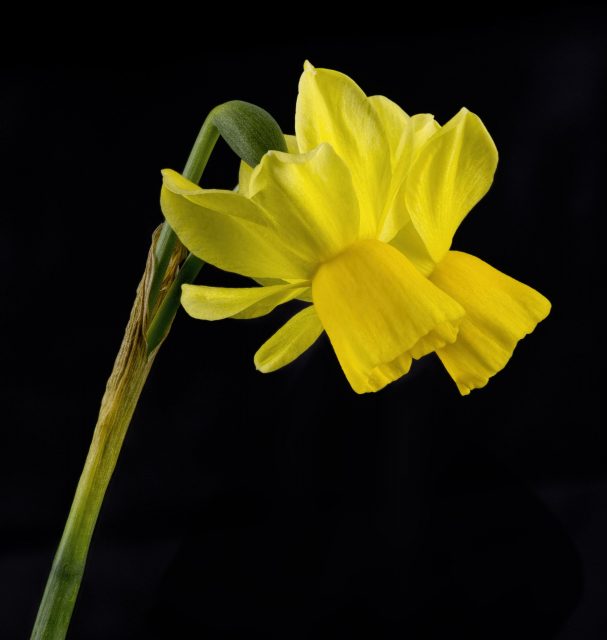 Click on the images to see them larger and in better color.

END_OF_DOCUMENT_TOKEN_TO_BE_REPLACED

Since you can’t do much gardening outdoors in February, you might as well read some books. One I regularly consult is Henry Beard‘s Gardening: A Gardener’s Dictionary, illustrated by Roy McKie. Beard may be familiar as the author of such works as Latin for All Occasions and Zen for Cats. Those with long memories might remember him as the most reliably funny writer at National Lampoon and as one of the scholars responsible for the volume variously known as Nuda Pierścieni, Loru sorbusten herrasta, or Bored of the Rings. He’s also an expert on bad golf.

Gardening has been out of print for years, but used copies are available for reasonable prices. Here are a few of the definitions.

Vermiculite
Obscure order of nuns dedicated to gardening. Like other devotional orders, the sisters take the traditional vows of chastity, poverty, and obedience, but in keeping with the demanding nature of their calling, the Vermiculites are the only such group with a special dispensation to drink, smoke, swear, and throw things.

Pest
Any creature that eats green vegetables without being compelled to.

Narcissus
Wonderful, early-blooming flower with an unsatisfactory plural form. Botanists have been searching for a suitable ending for years but their attempts — narcissi (1947), narcissusses (1954), narcissus for both singular and plural (1958) and multinarcissus and polynarcissus (1962, 1963) — haven’t enjoyed any real acceptance, and thus, gardeners still prefer to plant the easily pluralized daffodil or jonquil.

Jack-in-the-Pulpit
The state flower of Maryland. Shortly after being named, the designation was challenged by atheist groups who sued to have it removed on the constitutional grounds that its selection promoted religion. In a compromise that appears to have pleased no one, the plant was retained but officially renamed “Fred-in-a-phone-booth.”

Garden
One of a vast number of free outdoor restaurants operated by charity-minded amateurs in a effort to provide healthful, balanced meals for insects, birds, and animals.

Autumn
Delightful season that runs from the disposal of the last zucchini to the arrival of the first catalog.

Those who view botany as a branch of mathematics might find today’s Botany Photo of the Day of interest. See also the photo from three years ago.

I came across a few free online cactus and succulent journals. All make their back issues available for download.

Xerophila — a bilingual magazine, in Romanian and English. You may need to download the PDFs to read them; viewed online, the text in one language is overlaid on top of the other, making it unreadable.1 Special Issue #5, February 2015, is of particular interest. It’s devoted to the volcanic Rangitoto and White Islands in New Zealand:

… Claude Sarich, a sulphur miner working on White Island in 1931–32, left a vivid description: “The worst hell on earth, a place where rocks exploded in the intense heat, where men had to wear wool instead of cotton because cotton just fell apart in just a couple of hours, where they had to clean their teeth at least three times a day because their teeth went black, and where the land shook violently and regularly sending rocks flying through the air”.

Schütziana — Devoted to the genus Gymnocalycium.

It may be expensive to skim through these, or Succulent Sundae, while your browser is open to the Mesa Garden seed lists.

In the Third Reich the “non-Aryan” cactus had to live underneath the tables. 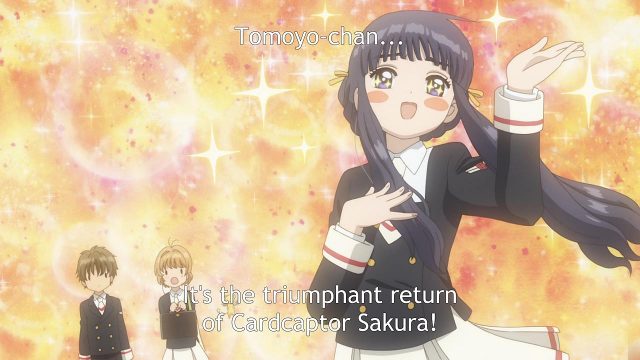 Cardcaptor Sakura is back. The first episode of the new series spent most of its time reintroducing the characters from the original, and I can’t say just how triumphant this return is likely to be until I see more. 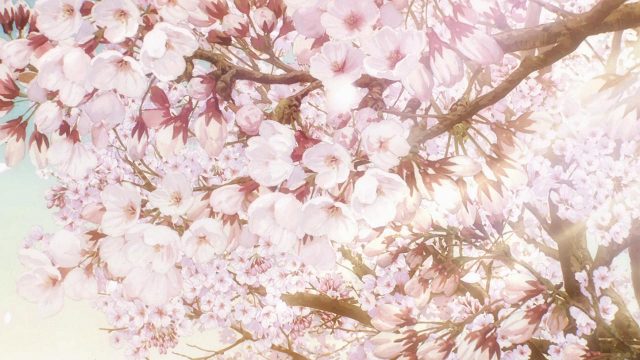 There is a lot of floral imagery. Cherry blossoms, above, are inevitable in the first episode of any school anime. Others seem more arbitrarily selected, and are sometimes hard to identify.

END_OF_DOCUMENT_TOKEN_TO_BE_REPLACED

The cactus seedlings are six months old now and starting to show typical spination. There are more pictures here.

I foolishly attended the orchid show last weekend with my checkbook on hand, with the result that I now have half a shelf of mostly “easy” orchids under lights in the kitchen. Most were in flower when I bought them, and you can see them here.

However, the one that is not blooming has perhaps the most interesting history. That is Neofinetia falcata (recently reclassified as Vanda falcata), the “samurai” orchid. According to the Fūkiran Society of America website,

Furan or wind orchid, the Japanese name for Neofinetia falcata, started to be called ‘Fūki-ran’, which means the orchid of the rich and noble people. Many years ago, only the rich and royalty could own Fūkiran, and they searched the country far and wide for rare and unusual varieties. These plants were often covered by a gold or silver net in order to protect them, and people had to cover their mouths with Kaishi (a thin paper usually used for calligraphy) in order not to breathe on the plants while they appreciated them. This, by the way, is the same way the Japanese appreciate a great sword.

Although prices have come down over the centuries, some varieties can still be pricey:

According to the dealer and most online sources, Neofinetia is fairly easy to grow, as orchids go. It blooms in summer.

END_OF_DOCUMENT_TOKEN_TO_BE_REPLACED

I’ve posted a few more portraits of cactus seedlings at the photo site.

I took the day off and spent the morning taking pictures at the botanical garden. You can see them here.