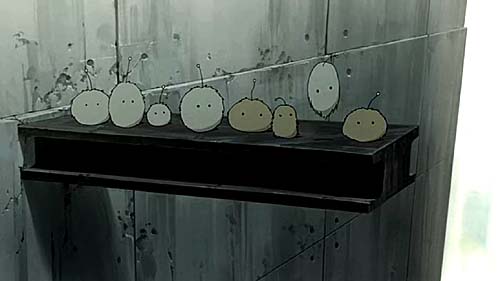 The second episode of Denno Coil introduces the adult members of Yuko/Yasako’s ((Yuko asks her friends to call her “Yasako.”)) family and adds another layer of complexity to the story. We meet her parents, but it’s Mega-baa, her grandmother, who dominates the episode. The crafty old woman runs the combination sweets store and cybershop where Fumie buys her kuro bug spray and other toys. Mega-baa can cure Yasako’s cyberpet of its virus, but there’s a price.

The connections between the real and virtual worlds become increasingly complicated. “Satchii,” a powerful but stupid antivirus program, cannot enter homes, schools or Shinto shrines. By slapping the appropriate “metatag” on the traffic light post, Fumie can change them to red — useful when Satchii is chasing the girls. By slapping a different metatag on Yasako’s forehead, Fumie enables her to fire beams from her glasses. (The beams looks like bolts of energy, but they seem seem to act by disrupting data, causing flickering gaps where they strike.) 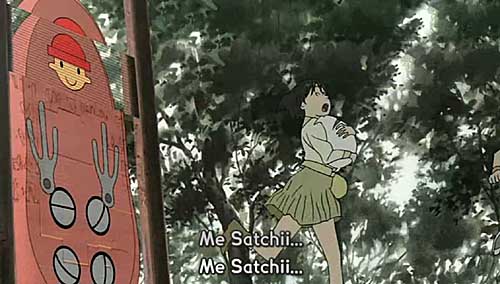 There is evidence that the humans in Daikoku City are themselves at least partly cybernetic. There’s also the puzzle that, although Yasako can pick up and hold Densuke, implying that there is some tactile feedback, she can’t tell if he is as soft and fluffy as he looks. 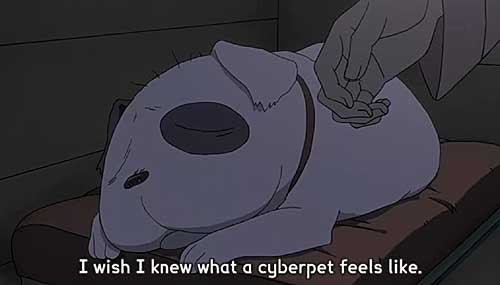 Besides the cybernetic paradoxes, Yasako also discovers that she may have forgotten important details of an earlier visit to Daikoku City when she was quite young. As she investigates the mysteries of the city, Yasako will likely discover much about herself and her family.

It’s too early to be sure, but I think that Denno Coil is probably the outstanding show of the spring. ((The other contenders are Seirei no Moribito, about which I’ll try to write something coherent soon, and Darker Than Black, the first two episodes of which are excellent, though it’s not what I enjoy. Astro discusses the latter here.)) These two episodes are as re-watchable as the first three of Kamichu! Everything is done well. The colors are muted, suggesting water colors, and the character designs are simple but expressive. There’s no cloying KyoAni prettiness here; instead, this highly artificial world seems natural and believeable. Yasako is an attractive character, and Mega-baa is quite formidable and interesting. 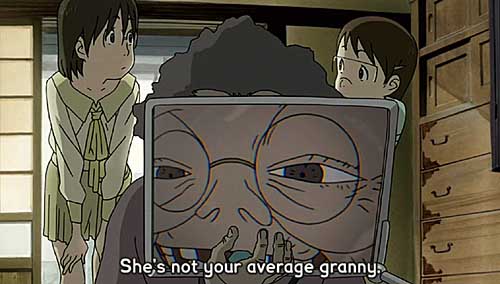 Thus far, Mitsuo Iso and company have been introducing the characters and setting up the rules of their world. What the story will ultimately be is not clear yet. Iso’s theme, according to one writer, is “the distance that separates everyone.” It’s not much in evidence yet, but there are twenty-four episodes to go. If Denno Coil ends as well as it begins, it might be a classic. (Of course, it could degenerate into an illogical mess, but given how sure-footed these two episodes are, I think we can reasonably hope for the best.)

END_OF_DOCUMENT_TOKEN_TO_BE_REPLACED

• If you believe in your heart or in your conscience that 2+2=5, does anyone else have the right to tell you that you’re wrong? Explain why we should avoid judging other people’s mathematical operations.
• Fractions are divisive. Can you think of better ways to express a quotient, without using divisive fractions? Is division something we should strive to do with numbers anyway?
• Explain why the labeling of numbers as either “positive” or “negative” is discriminatory, hurtful, and a manifestation of the bigotry of value-ism. How would you feel if you were labeled a “negative” number? What can you do to help end this kind of discrimination?

One of Wonderduck‘s kinfolk, away from the pond.

END_OF_DOCUMENT_TOKEN_TO_BE_REPLACED

Today is the anniversary of one of the darkest days in cultural history. To commemorate the event, consider what if Star Wars were an anime.

END_OF_DOCUMENT_TOKEN_TO_BE_REPLACED 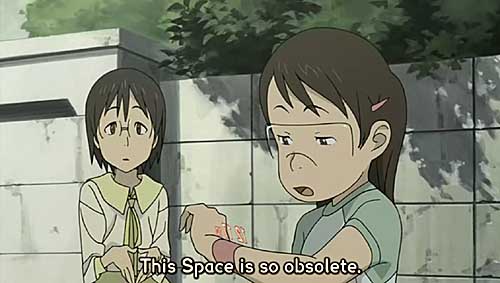 Yuko, newly arrived in Daikoku City with her impulsive little sister Kyoko, loses her dog Densuke when it chases an “illegal” — a sort of computer virus — through a hole in a fence into an “obsolete” cyberspace. Fumie’s business is retrieving lost cyberpets, and Yuko hires her to rescue Densuke. It’s a more difficult job than they anticipate.

Episode one of Denno Coil is the first episode of any of this season’s series that I watched a second time, which automatically makes it the coolest show currently being broadcast. In some respects, it really does seem like Serial Experiments Lain retold for youngsters. Virtual spaces are coincident with the everyday world, and one can open holes to the cyberspaces with “bug” spray. Children have cyberpets that look and behave like real dogs and cats but are visible only to those who wear special glasses. It is possible to pick up and hold these pets, and they can freely pass through the holes into cyberspaces. They don’t like it when you drop a backpack on/through them. Numerous small floating spheres constantly monitor Daikoku City for cybernetic breaches, blasting suspicious areas with a sort of ray. 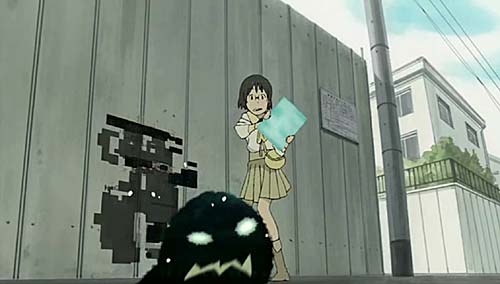 The first episode is very promising. The characters have distinct, non-cliche personalities, and the Denno Coil universe is the most interesting I’ve come across recently. Whether Denno Coil remains cool depends in part in how carefully and consistently director and writer Mitsuo Iso works out the logic of the intersecting real and virtual worlds. It also depends on whether he has twenty-six episodes’ worth of story to tell. The character designs are simplified but serviceable (though the characters who wear visors instead of glasses look like they have pig noses), and the art and the animation are adequate. The background music sounds interesting when I’m aware of it. 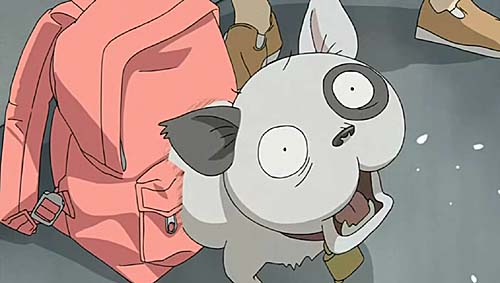 END_OF_DOCUMENT_TOKEN_TO_BE_REPLACED

The latest offering in the rapidly overflowing strategy genre is hard evidence that strategy games need a real overhaul, and fast. Chess, a small-scale tactical turn-based strategy game, attempts to adopt the age-old “easy to learn, difficult to master” parameter made popular by Tetris. But the game’s cumbersome play mechanics and superficial depth and detail all add up to a game that won’t keep you busy for long….

First Christian Church II. (When you don’t have a wonderful image, play with posterization and layers and other gimmicks.)

The offense is slightly mitigated by the fact that the fifth season never was licensed and thus there is no legitimate region 1 release. Still, usually it’s the “marketplace” dealers who sell bootlegs, not Amazon.com itself. 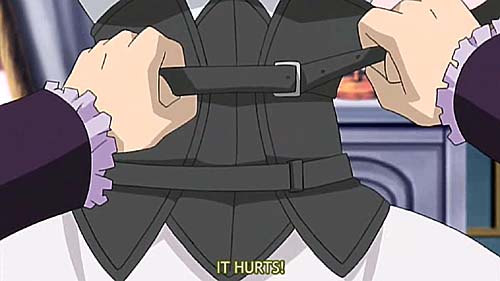 According to historical costumers, a properly-fitted corset is quite comfortable. Evidentally, in Foreland the craft of corsetry has sadly declined.

After the over-the-top first episode, the second episode of Murder Princess is a bit of a let-down as the former bounty hunter ((What is it with bounty hunters, anyway? I would have thought that Cowboy Bebop adequately covered the subject, but they keep turning up everywhere. Half the characters in El Cazador are bounty hunters.)) discovers the challenges of palace life. It’s still quite watchable, though, and it’s hard to dislike a series in which the good guys look like this: 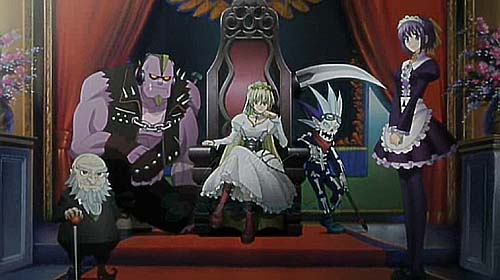